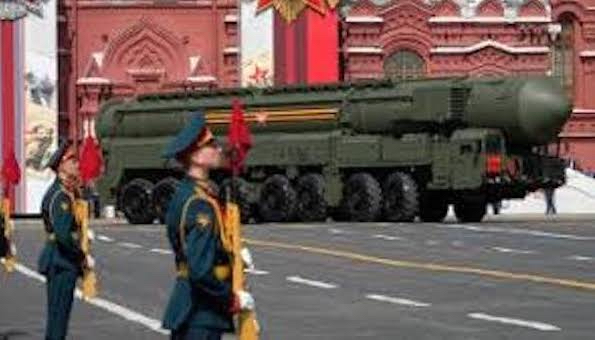 As fears of an atomic apocalypse in Ukraine continue stoked by the Russian media and the Moscow madman himself, it appears that some of Vlad Putin’s nuclear equipment is suddenly on the move.

Putin’s vitriol has gotten far more belligerent in recent months, as his troops continue to find themselves at the mercy of the Ukrainian army, despite having been the aggressors in this illegal and inhumane war. On several occasions, Putin has expressly mentioned a potential nuclear strike on Ukraine – a move that could see NATO and her allies get involved in the conflict.

Many have dismissed Putin’s talk as nothing more than bellicose threats, but now it appears he could be dusting off the nuclear arsenal after all.

A huge freight train moving specialist military equipment associated with a nuclear-arms wielding division of Russia’s Defence Ministry has been spotted on the move, prompting fears of an escalation in Putin’s war.

A series of BPM-97 armored personnel carriers (APCs) and other military vehicles were seen traveling through central Russia in a clip posted on the Telegram messaging app by the pro-Russian channel Rybar on Sunday.

Such advanced military hardware, the likes of which have scarcely been deployed on the frontlines in Ukraine, reportedly belong to the 12th Main Directorate of the Russian MoD.

This specialist division is dedicated to the storage, maintenance and provision of weapons to the likes of the Strategic Rocket Forces, a Russian military branch that controls nuclear missiles and forms a key part of Putin’s nuclear programme.

Here is why that’s alarming:

Military analyst Konrad Musyka claimed the deployment of such units could signal a coming escalation in the conflict from the warmongering Russian president or constitute a precursor to large scale nuclear drills.

It comes as NATO warned member states that Russia’s state-of-the-art Belgorod nuclear submarine has left its White Sea base, while key Putin ally Ramzan Kadyrov said Russia’s military should use ‘low-yield nuclear weapons’ to turn the tide of the war in Ukraine.

Moscow’s military doctrine allows nuclear weapons to be used if there is a legitimate concern for Russia’s sovereignty. There are fears that Putin’s sham annexation of several Ukrainian territories would be used as justification should Ukraine attempt to liberate them.