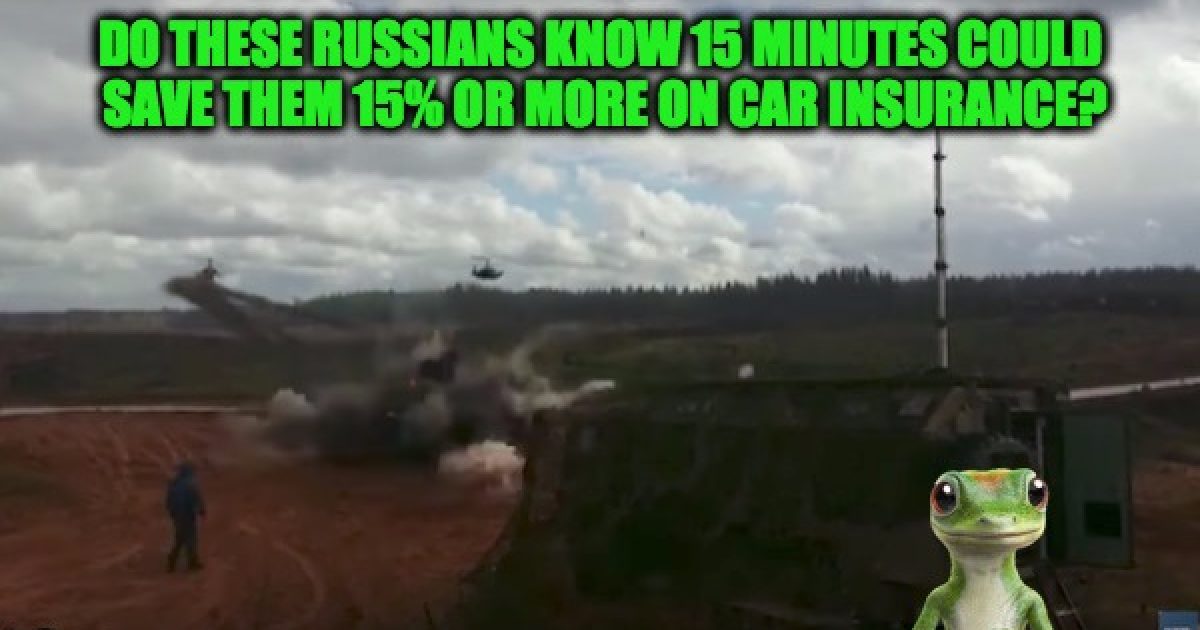 That’ll mess up your day.  On 19 September, a video was posted showing a Russian Ka-52 Alligator attack helicopter firing air-to-ground rockets near an observation area where civilian vehicles were parked, as civilians watched the action at a Russian training range.  Three people were reportedly injured.

The event was said to be at the Luzhsky firing range south of St. Petersburg, and to have taken place during the ongoing major exercise Zapad (“West”) 2017.  Later reporting suggested the rocket firing occurred on 16 September, prior to Vladimir Putin’s appearance at the Luzhsky range on 18 September to inspect the exercise action.  The Russian military has said it was accidental.

The exercise is being held at locations in western Russia, Belarus, and the Kaliningrad enclave, very close to the border with Poland and the Baltic Republics.  So there’s a natural tendency in the NATO West, on hearing about the helicopter event, to wonder just how close it was to – for example – Estonia.

Parts of the official statements on the matter don’t quite add up.  But in looking at those, we can keep in mind that, if it happened at the Luzhsky range, it was too far from the Estonian border for that proximity to be a factor.  The rocket firing wasn’t about sending a message to the Baltic Republics.  The rockets in question (S-8) have a maximum range of 6 km (3.8 miles).  The Luzhsky range is more than 100 km (62 miles) from the border with Estonia.

We can tell from the videos posted on the event that there was apparently a military vehicle being used as a target.  This 8-second clip shows the military vehicle more clearly than the original video from “Alex HR” does.

Another video posted at a Russian social media site shows damage to the military vehicle, and damage as well to a civilian vehicle in the vicinity.

The civilians at the observation point were initially thought to have been reporters.  However, the independent Russian bloggers at Conflict Intelligence Team (CIT) identify the damaged civilian vehicle as belonging to the Federal Security Service (FSB), according to its license plate.  (See here for a 2016 assessment of CIT’s work at the dissident site Khodorkovsky.com.)

The average person from a military background looks at these videos and asks, “What were they thinking, letting civilians park and walk around so close to a firing range target?”

Honestly, to me, that seems to be the long and short of it.  The additional point that the helo aircrew were making target runs in that area and fired into it with a clear view of what was down there is, well, obvious.  What was everybody involved thinking?

From the Western Military District (according to Twitter sources, although the document itself doesn’t show its origin), we have the word that the incident took place at the Luzhsky range, and on 16 September.  According to this account, when the firing helicopter approached the target, and “the main switch was turned on,” a “spontaneous descent of the rocket occurred.”

That doesn’t actually make a lot of sense if an exercise target was being aimed at, and then was actually struck.

In the context of the statement captured in the image above, the unguided rocket factor means that to hit what he’s aiming at, the crewman has to line up his shot and exercise positive control over the launch.

As Trevithick says, moreover, we don’t know if the S-8 rocket is incorporated on the Ka-52 in an integrated weapon system that allows for autonomous firing.  (The Ka-52 is Russia’s newest attack helo, a two-seat version of the Ka-50, and is still fielded in only limited numbers with the Russian army.)

But nothing in the video shows a connection between the HUD information and a rocket launch.  Incorporating an unguided rocket into such a system would be more than low-payoff; it could be actively counterproductive.  I’m skeptical about the “autonomous firing” explanation.  (Note: independent Russian media are even more skeptical than I am.)

The skepticism isn’t mitigated by the other conflicting statements from Russian authorities.  A widely cited statement by the Western Military District used different language to explain the “accidental firing,” claiming that the helo’s targeting system locked onto the wrong target, implicitly just before the rocket launch.  (This is the one The Drive refers to.)  But, again, the S-8 is an unguided rocket; attributing its hit to an erroneous target lock by the helo’s integrated targeting system doesn’t make sense.

Another statement, also attributed to the Western Military District, gave a more detailed description of the day at the range, referring to multiple helicopters under a lead helo’s direction attacking assigned targets with “unguided rockets” and “airborne cannons.”  This statement had the merit of sounding like a sensible summary, but it lacked detail about the erroneous rocket firing.

The Ministry of Defense reportedly gave a different version (see some links above), claiming that the helo event did not occur at the Luzhsky range and that it wasn’t part of the Zapad-17 exercise at all.  According to this version, the unit involved was engaged in separate training at the time.

If it happened in the last week, however, the likelihood is small that any front-line helo units in the Western Military District are doing something other than participating in Zapad-17, the largest military exercise Russia holds in the western part of the country, and one that is held at four-year intervals.

The reports have also conflicted regarding whether the date of 16 September is verified, and how many people were injured, with the numbers variously given as one, two, or three.

The level of credence we can put in formal Russian statements about relatively minor events like this has been declining rapidly over the last several years.  Unfortunately, conditions have reverted to pretty much what they were during the Cold War, at least in this regard.  That’s worth a pause for reflection.

In the U.S., if something like this happened – civilians being endangered and even injured –  the military would owe the public a sensible, bottom-line explanation, complete with an investigation and the involvement of political leaders.  That said, we can also remember that the story changed a couple of times on the USS Fitzgerald‘s collision near Tokyo Bay in June.  Initial confusion about what happened isn’t the clearest hallmark of peculiarly Russian official communication.

That distinction is better captured in the statement from the Ministry of Defense that the original reporting, which indicated that the rocket firing had endangered journalists, was “intentional provocation or someone’s personal stupidity.”  (See, for example, the RBC report linked above.)  The MOD doesn’t have a lot of room to talk, if this is how it runs its firing ranges. 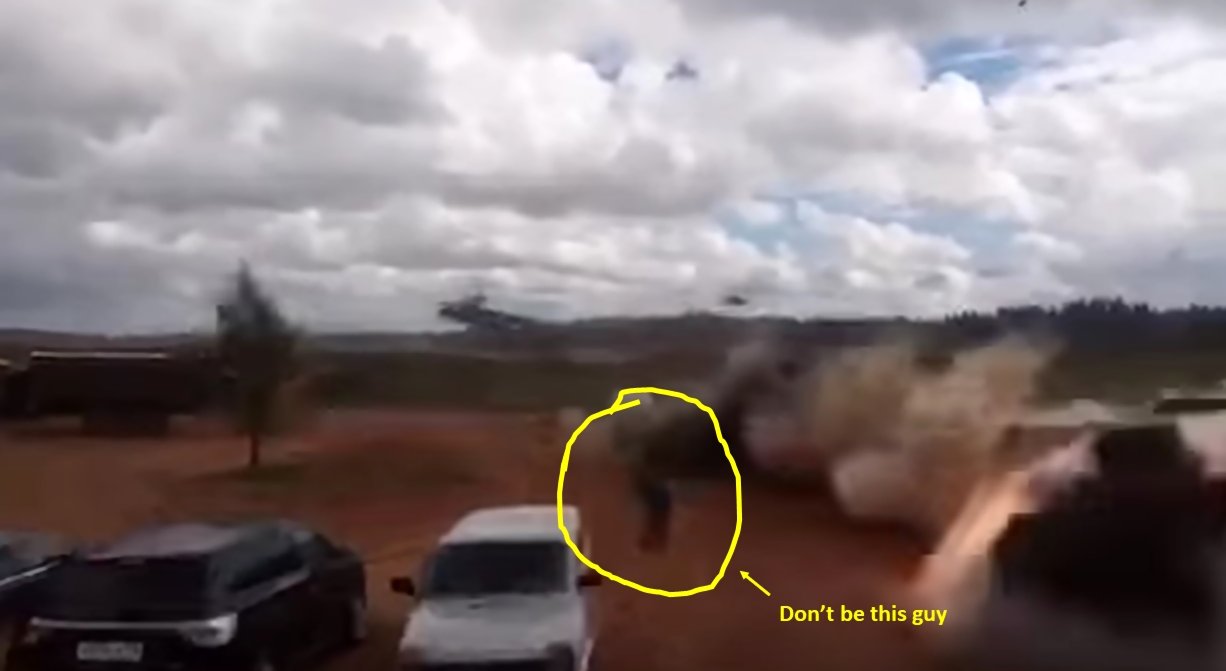