Russian Cyberattack On U.S. Election MUCH Worse Than Reported 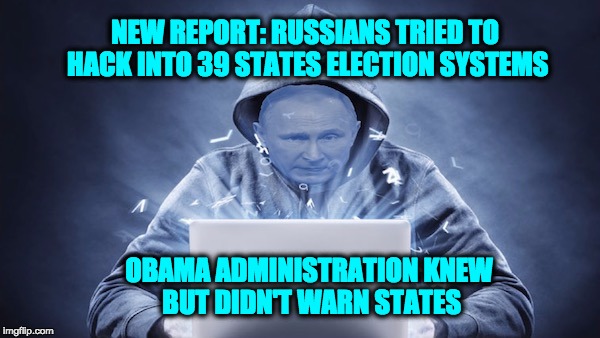 It appears that the Russian Cyberattack(whether government or private operatives is unknown – but both likely directed by leaders at the Kremlin) on the 2016 election was far broader than originally reported.

A new story breaking today in the major media outlets says that Russian operatives underwent a massive operation to hack at least 39 different state election systems. In Illinois they attempted to wipe out all of the state’s voter data, and in another state they attempted to access the campaign finance database. While the Russian attempts seem more egregious in this recent election, former FBI Director Comey explained last week that there is no evidence that the Russians were actually able to change a single vote or physically alter the election in any concrete way.

From the Bloomberg Report:

Russia’s cyberattack on the U.S. electoral system before Donald Trump’s election was far more widespread than has been publicly revealed, including incursions into voter databases and software systems in almost twice as many states as previously reported.

In Illinois, investigators found evidence that cyber intruders tried to delete or alter voter data. The hackers accessed software designed to be used by poll workers on Election Day, and in at least one state accessed a campaign finance database. Details of the wave of attacks, in the summer and fall of 2016, were provided by three people with direct knowledge of the U.S. investigation into the matter. In all, the Russian hackers hit systems in a total of 39 states, one of them said.

The scope and sophistication so concerned Obama administration officials that they took an unprecedented step — complaining directly to Moscow over a modern-day “red phone.” In October, two of the people said, the White House contacted the Kremlin on the back channel to offer detailed documents of what it said was Russia’s role in election meddling and to warn that the attacks risked setting off a broader conflict.

The new details, buttressed by a classified National Security Agency document recently disclosed by the Intercept, show the scope of alleged hacking that federal investigators are scrutinizing as they look into whether Trump campaign officials may have colluded in the efforts. But they also paint a worrisome picture for future elections: The newest portrayal of potentially deep vulnerabilities in the U.S.’s patchwork of voting technologies comes less than a week after former FBI Director James Comey warned Congress that Moscow isn’t done meddling.

“They’re coming after America,” Comey told the Senate Intelligence Committee investigating Russian interference in the election. “They will be back.”

In fact, the threats were so serious and so numerous that the Obama administration put everything else on the backburner (even the so-called DNC hacks) and focused the Justice Department’s efforts on figuring out what Russia was doing.

The Obama administration even attempted to wrest control of state election systems from the states, but they faced stiff opposition across the nation. It wasn’t until after the election that a deal between the federal government and the states was worked out. However, while the Obama administration may have been very worried about the Russian hacking… they were apparently not worried enough to warn the states about what was going on.

A report from the Daily Caller last week becomes even more shocking after the latest revelations from Bloomberg:

Neither former President Barack Obama nor any member of his cabinet warned state election officials of any Russian effort to hack or interfere with the country’s electoral systems, according to the president of the National Association of Secretaries of State.

Asked if there were any private briefings for state election officials on possible Russian interference prior to the November 2016 voting, Merrill said, “No. We were not briefed on any of that. We were not told in advance.”