The Reason “Russian Bounty On US Troops” Story Was Released, And The Reason It Was Corrected 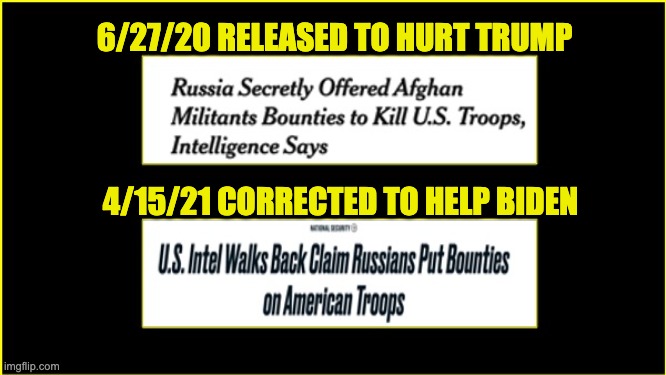 Russian bounty on US troops

Remember before the election when the liberal media told us the Russians were paying bounties for the deaths of U.S. soldiers in Afghanistan? Now we finally learn that it was all just fake news to fight Donald Trump’s plan to pull out of Afghanistan and hurt his campaign.  It was corrected to help sell Biden’s announcement that we will be pulling out of Afghanistan.

On June 27 of 2020, the Times published a story that all the left-wing press went wild for. The paper claimed that Donald Trump’s “friends” in Russia were paying people to kill U.S. soldiers.  Even though President Trump called it a hoax, the MSM leaped on the story  The June 27th date of the Russian bounty falsehood was leaked by the intelligence community and published, one day after Trump’s plan to reduce the number of troops in Afghanistan was given to the press.  That timing certainly makes it seem like someone in intelligence didn’t agree with Trump’s plan.

And it gave the withdrawal plan’s opponents ammunition to fight the Afghan withdrawal:

House Armed Services Committee voted overwhelmingly in favor of an amendment — jointly sponsored by Democratic Congressman Jason Crow of Colorado and Congresswoman Cheney of Wyoming — prohibiting the expenditure of monies to reduce the number of U.S. troops deployed in Afghanistan below 8,000 without a series of conditions first being met.

The imposed conditions are by no means trivial: for these troop reductions from Afghanistan to be allowed, the Defense Department must be able to certify, among other things, that leaving Afghanistan “will not increase the risk for the expansion of existing or formation of new terrorist safe havens inside Afghanistan” and “will not compromise or otherwise negatively affect the ongoing United States counter-terrorism mission against the Islamic State, al Qaeda, and associated forces.”

The news that the story was fake became public from the most unlikely of sources–the Biden administration interestingly the story was released the day after Biden announced his Afghanistan troop withdrawal which faced pushback from some in Congress, even Democrats such as Senator Jeanne Shaheen (D-RI) and Rep. Seth Moulton (D-MA), and former military leaders such as Genera; David Petraeus.

The information was first released to reporters during a conference call providing information about Biden’s new sanctions on Russia.  When the administration gave a list of reasons for the sanctions, the supposed bounty for killing US soldiers was not on the list—the intelligence community had “low to moderate” confidence in the story. In spy speak “low to moderate,” the intelligence agencies believe the story is, at best, unproven—and possibly untrue.

Per the Daily Beast, the officials on the call explained the “low to moderate” confidence in the story and

…the reporting about the alleged “bounties” came from “detainee reporting”–raising the specter that someone told their U.S.-aligned Afghan jailers what they thought was necessary to get out of a cage. Specifically, the official cited “information and evidence of connections to criminal agents in Afghanistan and elements of the Russian government” as sources for the intelligence community’s assessment.

(…)The senior Biden official added on Thursday that the “difficult operating environment in Afghanistan” complicated U.S. efforts to confirm what amounts to a rumor.

Just a rumor that was given by someone in the intelligence community to be pushed by the MSM during an election campaign to poke holes in one of President Trump’s strongest selling points and to fight his plan to withdraw troops from Afghanistan, something he had been promising since his first presidential run.

Just a rumor that was finally outed as such to help Joe Biden fight the pushback on his plan to withdraw troops from Afghanistan.

One may believe the strange timing of releasing the fake news and the story to correct the falsehood may both be coincidences. To those people, I would ask if it was the tooth fairy or a unicorn who told them it was a coincidence and follow up by selling them the Brooklyn Bridge–real cheap.

Russian bounty on US troops