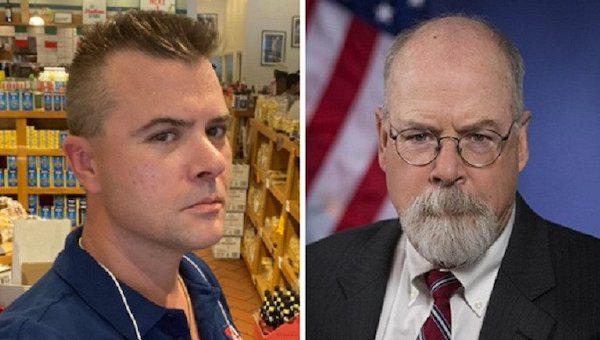 John Durham has made another arrest, a Russian national who allegedly worked as the researcher for Christopher Steele’s infamous dossier. The Russian,  Igor Danchenko, has been charged with lying to the FBI on five different occasions between March and November 2017. Danchenko was arrested on Thursday morning, Nov. 4th.

The indictment (embedded below) claimed that Steele’ relied primarily” on Danchenko “to collect the information that ultimately formed the core of the allegations found” in the dossier. And much of the dossier was invented.

Igor Danchenko is a Russian citizen living in Virginia. The 39-page indictment details the saga of how the FBI relied on Danchenko’s information to obtain the FISA warrants for wiretapping the Trump campaign. The indictment clearly mentions that the dossier itself was compiled at the behest of the Clinton campaign and accuses a 2016 presidential campaign of involvement with the Russians (and it’s not the Trump campaign).

The indictment circles around an unnamed figure called PR-Executive-1 who was a close Clinton adviser who held high positions in the Democratic party and prior Clinton campaigns. Most embarrassing are references to the Clinton adviser meeting with possible Russian intelligence figures and other Russian sources, including this line:

The indictment describes the individual in this way:

“PR Executive-1 had served as (1) chairman of a national Democratic political organization, (2) state chairman of former President Clinton’s 1992 and 1996 presidential campaigns, and (3) an advisor to Hillary Clinton’s 2008 Presidential campaign. Moreover, beginning in or about 1997, President Clinton appointed PR Executive-! to two four-year terms on an advisory commission at the U.S. State Department. With respect to the 2016 Clinton Campaign, PR Executive-! actively campaigned and participated in calls and events as a volunteer on behalf of Hillary Clinton.”

There are already suggestions swirling around suggesting which of the beltway PR people is the one in the indictment called PR Executive-1. Don’t believe any of them yet. I predict we will know who that person is before Thanksgiving.

Danchenko claimed that Steele told him to find “compromising materials” on Trump (i.e., opposition research). But even when the Russian took trips to Moscow, there was no evidence of any salacious activity on Trump’s part. It all appears to have been fabricated.

Igor Danchenko is the third person charged by John Durham’s investigation into the origins of the Russian hoax against Trump. The first was not a result of the Durham probe, former FBI lawyer Kevin Clinesmith, who pleaded guilty to making a false statement, but his offense was outed by I.G. Horowitz.

Other than Danchenko, the only other one coming from Durham’s work was former Perkins Coie attorney Michael Sussman, for making a false statement to the FBI. Perkins Cole was the law firm that hired Steele to find trash about Trump.

.So far, Durham has failed to find the real planners behind the Russia hoax. This raises the question, is this as high as he’s going to go, or Is he building up to get “The Big Kahuna” of the Russia Hoax?

Jonathan Turley believes Durham is building up to “the Big Kahuna.”

Danchenko is not someone who immediately comes across as an apex defendant — the highest target in an investigation. He was a key source used by others to advance false or unsubstantiated claims against Trump. He is the type of defendant that prosecutors pressure to flip against those who retained him or used him in this effort. In other words, he strikes me as someone who can be used as a building block to apex defendants.

Potential apex targets above him in the investigation range from Steele himself to Clinton general counsel Marc Elias to Clinton campaign officials.

It’s no surprise that Hillary Clinton’s campaign was involved in the Russia hoax. She has a long history of being a dirty self-serving politician.

Danchenko Indictment Released to the Public by Jeffrey Dunetz on Scribd