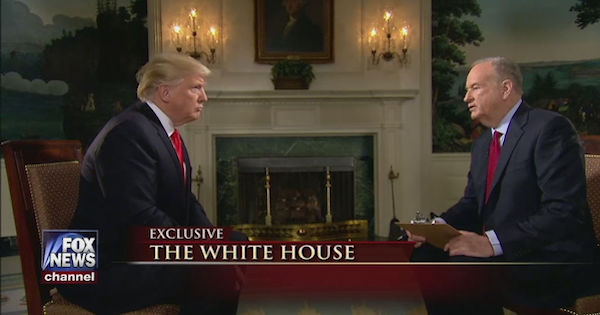 Now THIS is funny!

During his interview of President Trump on Super Bowl Sunday,  Fox News’ Bill O’Reilly called Russian president Vladimir Putin a “killer.” Now the Russians are demanding an apology for the statement they consider “unacceptable and insulting.”

“We consider such words from the Fox TV company to be unacceptable and insulting, and honestly speaking, we would prefer to get an apology from such a respected TV company,” Kremlin spokesman Dmitry Peskov told reporters on a conference call.”

The U.S. President stirred controversy in the same segment where O’Reilly called Putin a killer. O’Reilly asked Trump whether he “respects” Putin “I do respect him, but I respect a lot of people,” The President said, “That doesn’t mean I’m going to get along with him.” Trump added that he would appreciate any assistance from Russia in the fight against ISIS terrorists, and that he would rather get along with Russia than not

“But, he is a killer,” O’Reilly said. “There are a lot of killers,” Trump responded, “We’ve got a lot of killers. What do you think? Our country’s so innocent?” as he gave the Iraq war as an example.

The President opened himself up for criticism as he seemingly drew a moral equivalence between Putin’s assassinations of political opponents and the U.S. actions in Iraq.

While the President was probably correct in not wanting to call the Russian leader a murderer on national TV,  but the comparisons with the Iraq war were entirely inappropriate. As for an apology from Fox or Bill O’Reilly, allow me to suggest I will play in a Super Bowl before any apology comes FNC or O’Reilly.

Below is a video of the O’Reilly/Trump interview