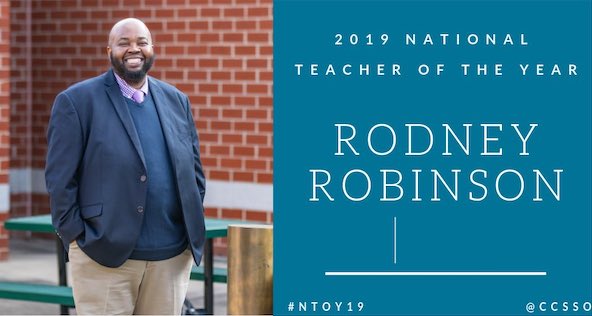 Rodney Robinson, the man who was named the “National Teacher of the Year” back in 2019 by the Council of Chief State School Officers, prepped for New Years by tweeting that Senate Majority Leader Mitch McConnell’s neighbors should rip a page out of the playbook the neighbor who assaulted Sen. Rand Paul and violently attack McConnell.

According to Rodney Robinson, this would make such an individual a “true Kentucky hero.”

The neighbor who assaulted Sen. Paul left him with six broken ribs, which made it necessary for doctors to remove a part of his lung.

Robinson tweeted, “Who are Mitch McConnell’s neighbors? I’m just saying Rand Paul’s neighbor did what a true Kentucky hero should do. It’s your turn to step up.”

2019 National Teacher of the Year pic.twitter.com/0PQTDxos3v

I encourage parents with kids at @RPS_Schools to call your school about one of your teachers celebrating a brutal attack on one senator and calling for violence against another. This teaches your students they should not dissent using reason and intellect, but violence. https://t.co/H0K5n9ve8B

Robinson eventually deleted the tweet and posted a response to the backlash, which he blamed on “conservative bots“: “I made a Mitch McConnell joke today and the conservative bots are real angry. It’s funny because the joke was made early today and no one said a thing until I promoted black medical awareness.”

When he was awarded Teacher of the Year in 2019, the Council of Chief State School Officers said of Robinson, “He creates a positive school culture by empowering his students – many of whom have experienced trauma – to become civically-minded social advocates who use their skills and voices to affect physical and policy changes at their school and in their communities,”

Civically minded? Suggesting that someone attack the Senate majority leader is an example of being civically minded? Notice how after he was called out for his hateful joke and rhetoric, he immediately pivoted to blaming the whole thing on racism? I would blame it on idiocy…HIS idiocy–and the idiocy of the organization that named him the national teacher of the year.

Blaming racism is a clear indication this low-class fellow realized he said something he shouldn’t have and was none too happy about being called out for it. Well, Rodney Robinson, the technical answer for your lack of happiness is tough sh*t!

One of the great things about social media is the court of public opinion can hold a person accountable for saying stupid, evil things. Robinson should be reprimanded in every way possible for his comments.

There’s no excuse for calling for violence against one another just because we disagree on politics.

And to think….this man is paid by tax dollars to warp the minds of our most precious resource–our children.