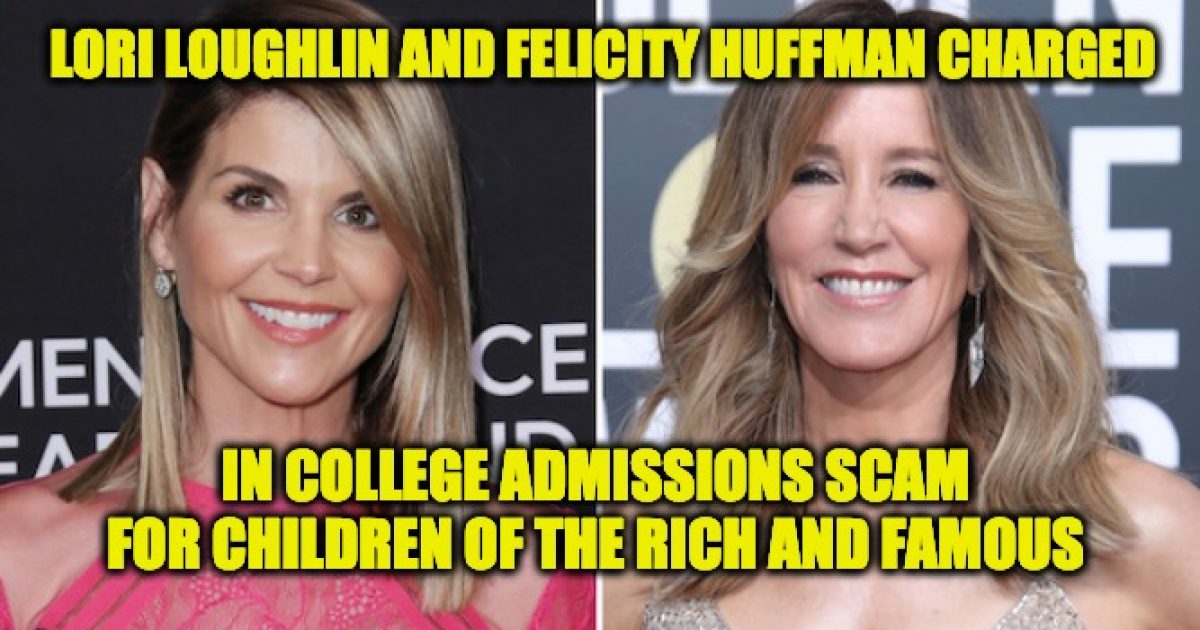 The year-long FBI investigation which they code-named Operation Varsity Blues, uncovered a network of wealthy parents who paid anywhere from $200,000 to $6.5 million to guarantee their children’s admission to elite schools such as Georgetown University, Stanford University, UCLA, the University of San Diego, USC, University of Texas, Wake Forest, and Yale. Among the parents charged were actresses Lori Loughlin and Felicity Huffman.  A list of the others charged including 33 parents and 13 coaches and associates of Singer’s businesses, and two SAT and ACT test administrators appear at the bottom of this post.

Holy Cow! So this must be why I never got into Yale (well that, mediocre grades. lack of a scholarship, and limited athletic talent).

The parents paid their cash to William Singer (who is cooperating and pleading guilty)  the founder of the Edge College & Career Network. who reaped approximately $25 million by getting the kids into the elite schools. In turn, Singer paid people to take tests for the children (bribing test administrators to allow it to happen) or bribing college coaches and administrators to identify the applicants as athletes even if they never played the sport.

So that’s why I never got into Yale,  my parents only offered a serving of my Mom’s best brisket, a pound of her chopped liver, and a lokshen kugel (noodle pudding).

According to Andrew Lelling, the U.S. attorney for the District of Massachusetts and the guy with a beard in the tweet above:

Lelling said the coaches allegedly “knew the students’ athletic credentials had been fabricated.”

He said Singer allegedly worked with the parents to “fabricate profiles for their kids, including fake athletic credential and honors, or fake participation in elite club teams.”

Singer allegedly even had parents stage photos or Photoshopped pictures of their children participating in sports.

Can you imagine that? I was really on my High School Varsity Football team and that didn’t help me at all.  I even got into parts of two games during my HS Football career.   I know the pain of not getting a slot at an elite school. That Singer and the rich parents caused pain to the kids who should have been admitted to those schools.

As a parent of two kids with special needs, this version of the scandal is the worst,

According to the charging documents, Singer facilitated cheating on the SAT and ACT exams for his clients by instructing them to seek extended time for their children on college entrance exams, which included having the children purport to have learning disabilities in order to obtain the required medical documentation. Once the extended time was granted, Singer allegedly instructed the clients to change the location of the exams to one of two test centers: a public high school in Houston, Texas, or a private college preparatory school in West Hollywood, Calif. At those test centers, Singer had established relationships with test administrators Niki Williams and Igor Dvorskiy, respectively, who accepted bribes of as much as $10,000 per test in order to facilitate the cheating scheme. Specifically, Williams and Dvorskiy allowed a third individual, typically Riddell, to take the exams in place of the students, to give the students the correct answers during the exams, or to correct the students’ answers after they completed the exams. Singer typically paid Ridell $10,000 for each student’s test. Singer’s clients paid him between $15,000 and $75,000 per test, with the payments structured as purported donations to the KWF charity. In many instances, the students taking the exams were unaware that their parents had arranged for the cheating.

A parent of children with special needs has to fight like all hell to get the necessary special arrangements for their children. Be it a quiet testing room with fewer kids, extended time, use of a computer to type answers instead of writing them, just to name a few. The first answer is usually no, and parents have to fight to make that no a yes.  Singer’s scandal makes it harder for those parents to prove that their kids need adjustments.

A third element of the scam as outlined by the DOJ covering up the bribes and tax fraud.   Beginning around 2013, Singer allegedly agreed with certain clients to disguise bribe payments as charitable contributions to Key Worldwide Foundation (KWF) a fake charity. It not only allowed the parents to hide the bribes but it enabling clients to deduct the bribes from their federal income taxes as a charitable donation.   KWF issued those parents a donation letter which said in part “Your generosity will allow us to move forward with our plans to provide educational and self-enrichment programs to disadvantaged youth,” and falsely indicated that “no good or services were exchanged” for the donations. Many clients then filed personal tax returns that falsely reported the payment to the KWF as charitable donations.

During the press conference where he announced the arrest, Andrew Lelling said the investigation was not over.  In other words, the list of the fifty people arrested (below) might be growing, and that’s a good thing. Because, as Lelling said “There can be no separate college admissions system for the wealthy and, I’ll add, there will not be a separate criminal justice system either.

Now please read the list of people charged in the scam while I write a nasty letter to Yale.

According to the DOJ people charged so far include

The following defendants were charged in an indictment with racketeering conspiracy:

The following defendant was charged in a criminal complaint with conspiracy to commit mail fraud and honest services mail fraud:

The following defendants were charged in a criminal complaint with conspiracy to commit mail and wire fraud: