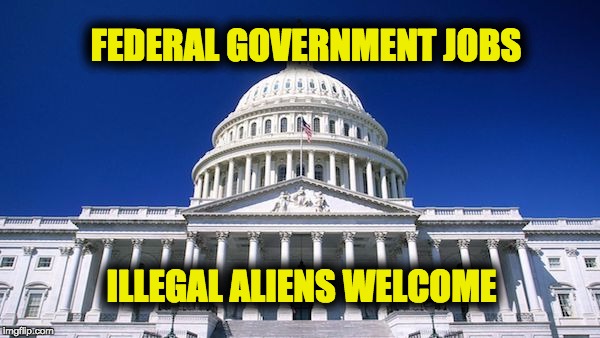 It should go without saying that people who are not legally in this country should not receive Federal Jobs.  But apparently it needs to be said ..at least to  liberals in congress (of both parties).

An amendment added by Rep. Pete Aguilar (D-CA) to the Appropriations Committee’s Fiscal Year 2018 Financial Services Bill qualifies “dreamers” for federal employment. Specifically, the amendment adds language allowing individuals authorized to be employed under the Deferred Action for Childhood Arrivals program [Obama’s Dreamer executive order] to be eligible for employment by the federal government. The amendment was adopted on a voice vote.

As the committee is composed of 30 Republicans and only 22 Democrats, at least five Republicans had to vote for the amendment for it to be passed.  But because it was approved via a voice vote we will never know who those Republicans were.

It used to be that government jobs weren’t great because they paid less than the private sector.  But that’s all changed. Government salaries are now similar to equivalent private sector jobs, they have great benefits, and job security. One has to basically kill someone to get fired (even then you will probably get off with a warning).

Now Rep. Tom Graves (R-GA), along with other Republicans is spearheading an effort to strip the amendment from the bill before it reaches the house floor. They are trying to convince the House Rules committee to declare Rep. Pete Aguilar’s amendment improper. or out-of-order. The ruling will allow a congressman to request a floor debate and a vote on that particular amendment, which if agreed to by the majority of the House, will remove the amendment from the bill

If the bill does get stripped from the bill, look for Nancy Pelosi to call House Republicans bigots, and Senate minority leader Chuck Schumer will start crying. Let’s just hope that a vote about the amendment is not done via a voice vote so Americans can tell which members of congress support the rule of law and believe federal jobs should only go to people who are here legally.