Shouldn't it matter what crimes they committed? Not to a liberal. 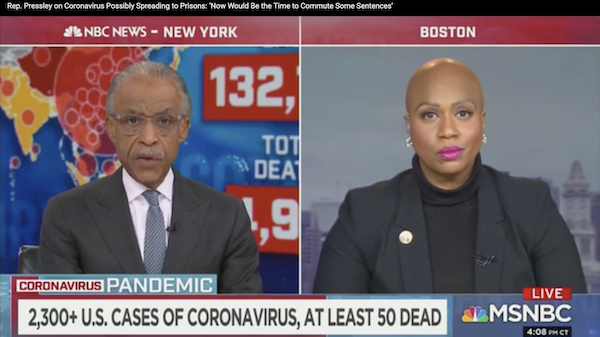 You have probably read about how greatly various aspects of criminal justice reform have improved life in American society. New York State’s bail reform law, which eliminates cash bail in order to level the playing field, has already cost at least one life while returning an arsonist and a rapist to the streets. Rep. Pressley commute sentences

But that’s only scratching the surface of what liberals have in mind. Virginia, whose legislature is now controlled by Democrats, is weighing legislation that would free middle-aged murderers.

Now in the wake of the coronavirus epidemic, the Left is calling for governments to release prisoners en masse, reduce arrests, and limit immigration enforcement.

Squad member Ayanna Presley, whose new bald look is a result of a medical condition, was a guest on Al Sharpton’s shows on MSNBC. There she laid out the particulars for the case of commuting sentences to protect the prison population from infection. Perhaps the convicts should be replaced by liberal politicians.

A video appears below, followed by a transcript of the interview.

AL SHARPTON: Congresswoman, as we look at this, there is deep concern about the underserved communities on how they are going to be tested, how — if we can get the Senate to pass what you and your colleagues did last night, how will that play out in areas that don’t have a lot of health services in the immediate area? How do we deal with this?

AYANNA PRESSLEY: Well, what I’ve been focusing on, rev, in my role on oversight is certainly all those vulnerable communities already lefing on the margins, as you alluded to earlier. It has crossed every socio- and political fault line in our country. When we’re talking about our most vulnerable, our low-income residents, and those experiencing homelessness, and seniors and that we are also including the incarcerated men and women, who are amongst one of the most vulnerable populations and given the crowding and overpopulation in our prisons for a confluence of other reasons we won’t get into in this interview, are an ecosystem in a petri dish for the spreading of this pandemic, which is why I partnered with my colleagues, representative Velasquez to use the follow power for guidance on how we will contain and mitigate this epidemic behind the wall. Do they have access to testing, has anyone tested positive, and what are the quarantine measures? The fact that many of these facilities are already subpar and they do not have access to soap, to alcohol-based hand sanitizers, and regular showers, what is the guidance for those incarcerated and for staff? And that the BOP. [Bureau of Prisons] use their full powers, I think now would be the time to commute some sentences, to exact clemency and to take care of our most vulnerable. Ten percent of those incarcerated are over the age of 60 and already have an underlying condition.

Shouldn’t it matter what crimes they committed? Not to a liberal.