The Dem’s Latest Craziness: Let Obama & Biden Decide If Trump Is Fit To Remain In Office 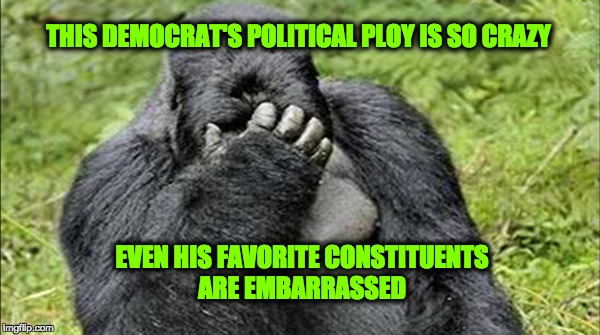 By Howard Portnoy and Jeff Dunetz

Just when you’ve though you’ve seen everything…Rep. Earl Blumenauer  (D-Ore.)  is obviously still living in the state of denial. Even though congress is in recess, he’s introduced a bill grounded in the idea that 25th Amendment’s process for removal of an unfit president is unsuitable. The implication is he would’ve liked to have had this to use against President Trump. His bill would give former presidents and vice presidents of both parties the authority to assess whether a sitting president is fit to remain in office.

This bill is something different for Blumenauer he usually concerns himself with monkey buisness. One of his earliest acts upon becoming a congressman in 2009 he sponsored the Captive Primate Safety Act to bar the sale or purchase of non-human primates for personal possession between states and from outside of the country. The previous year, Blumenauer had sponsored legislation to ban interstate trafficking of great apes, which had passed in the House but was tabled by the Senate.

When asked about his removal of the President bill by The Hill  Blumenauer said:

It is hard to imagine a better group to work with the vice president to examine whether the president is able to discharge the duties of the office. When there are questions about the president’s ability to fulfill his or her constitutional responsibilities, it is in the country’s best interest to have a mechanism in place that works effectively.

The proposal, which is borne of the concern that 25th Amendment of the Constitution, aka the “crazy man clause,” is not sufficient to remove Donald Trump from office, is the latest manifestation of Trump Derangement Syndrome to emanate from the minority party in Congress.

Blumenauer first raised concerns about the 25th Amendment in a House floor speech in February during which he expressed worry about what he viewed as “erratic” behavior from Trump. At the time, he pointed to Trump’s baseless claims about voter fraud in the election and stating that it was sunny during his inaugural address when it was, in fact, raining.

Blumenauer may have at least one supporter in his own party. In February, Rep. Ted Lieu  (D-CA.) floated legislation that would mandate the addition of a psychiatrist to the White House staff. Said Lieu at the time, “the president — any president — should have access to a mental health professional” given the enormous pressures of the job.

In the current political climate where Democrats will do anything to overcome the feelings of impotent rage that have gripped the party since last November, it is unlikely that the Republican majority in Congress will entertain a serious proposal to unseat the president, much less idiotic fantasies like Blumenauer’s or Lieu’s.

Much of this post was originally seen at Liberty Unyielding