Six Reasons Why Comey’s Firing Is NOTHING Like The ‘Sat. Night Massacre 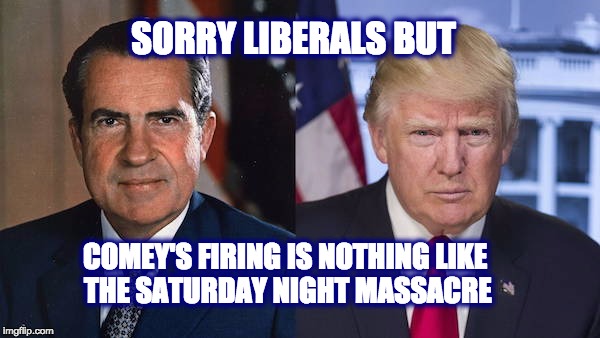 Almost as soon as it was announced that President Trump fired FBI Director Comey the Democrats started screaming that his action was Nixonian or reminiscent of Nixon’s “Saturday Night Massacre,” a ridiculous comparison.

For those who did not live through Watergate, the “Saturday Night Massacre” refers toon October 20, 1973, when President Nixon ordered the firing of Watergate prosecutor Archibald Cox. Rather than comply  Attorney General Elliot Richardson resigned rather than fire Cox, when the responsibility fell to Deputy Attorney General William Ruckelshaus, he followed Richardson’s lead and also resigned. Finally solicitor general Robert Bork, who unlike the first two did not assure congress that he would never interfere with Cox, followed the order and fired Cox.

Anyone who is familiar with the Nixon and the Trump actions know that the two firings were not even close to being alike,  anyone who believes they are similar is just taking another opportunity to bash President Trump. Want proof, below are six reasons the firing of Comey is different from the “Sat. Night Massacre.”

3) Evidence: Even without the White House tapes and before the “Saturday Night Massacre” we know some facts, either thanks Woodward and Bernstein or testimony to the Senate Watergate Committee. That evidence included:

As of the day Comey was fired there was no public evidence that Trump or anyone in his campaign colluded with the Russians to hack into the Hillary campaign or the DNC. In fact the same week of the firing former Director of National Intelligence Clapper said so far there is no evidence of any collusion with Russia, Democratic Party hack Adam Schiff said there was no evidence yet…heck, even crazy Maxine Waters said there was no evidence. That doesn’t mean that one day there won’t be evidence, but it does mean that President Trump wasn’t motivated by the walls closing in, the same way that people were preparing a “perp walk” for Nixon.

4) The Cox Firing Was Top Down, Comey’s Firing was Was Bottom Up: Cox was fired because President Nixon ordered the firing. Comey was fired because his immediate supervisor Deputy AG Rod Rosenstein sent a letter to his boss AG Jeff Sessions saying that Comey was under-performing Sessions agreed with the recommendation and sent it along with the President.  Trump accepted the recommendation of his senior people and did the firing.

5) Timing: Nixon fired Cox the day after the special prosecutor refused a compromise that the president give the tapes to Senator John C. Stennis to review and summarize the tapes for the special prosecutor’s office. While Stennis, may have done the best he could, the Democrat from Mississippi was very hard of hearing and wouldn’t have been able to hear much of the tapes. Deputy AG Rod Rosenstein who made the recommendation has been in office for two weeks, getting the lay of the land and evaluating his subordinates before sending his recommendation.  Possibly accelerating the action was Comey’s awkward testimony last week where he bragged about going around the Department of Justice Management for his initial press conference where he let Hillary off the hook, as well as making an accusation about the volume of emails Huma Abedin forwarded to her husband that turned out to be untrue.

Sorry Democrats and MSM, but your claim that the firing of Comey is reminiscent of the “Saturday Night Massacre” is pure hyperbole.

Bob Woodward agrees. He was interviewed by his own paper about the comparisons between the Saturday Night Massacre and the firing of Comey: