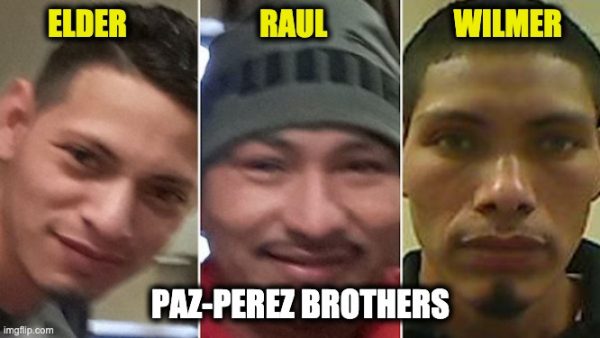 The young girl tried to lock herself in a bedroom to escape the three men, but they broke into the room and raped her. The incident took place on September 9 when the three men were left alone with the girl in a Kenner, Louisana home. rape of 10 yr old

Two of the suspects, twin brothers Raul Paz-Perez and Wilmer Paz-Perez, 35, were arrested on September 12, charged with first-degree rape involving a juvenile under the age of 13, according to Kenner police. Their younger brother, Elder Paz-Perez, has not yet been captured.

Kenner Police arrested the two men after a relative of the girl called them after finding out about the rape.

The three brothers had made sexual advances towards the girl and even offered her money for sex acts, but she refused and locked herself in a bedroom.

“After defeating the lock, the three entered the room, undressed the victim, held her down and sexually assaulted her,” Kenner Police said in a statement.

A third brother, 31-year-old Elder Paz-Perez, is still being sought as of early Tuesday on the same charge, Lt. Michael Cunningham told The Post.

“We don’t know where he is,” Cunningham said. “He may be out of state.”

Elder Paz-Perez is the boyfriend of the 10-year-old girl’s mother. He and his brothers had been living with the girl and her family, including her 15-year-old sister and two stepsiblings, at the time of the alleged attack, Cunningham said.
Source: New York Post

If that wasn’t bad enough, it appears that the brother who is on the lam may have sexually assaulted the victim’s older sister, and detectives are interviewing two other stepsiblings.

Disturbingly, Elder is now wanted on additional charges regarding a second potential victim – the 15-year-old sister of the 10-year-old girl…

…Detectives say the 15-year-old sister of the 10-year-old victim had ‘made a disclosure’ about an incident a few years earlier, and they are now investigating whether she was also sexually assaulted by Elder.

Two stepsiblings of the 10-year-old girl are also being interviewed by detectives.
Source: Daily Mail

Raul and Wilmer Paz-Perez are being held without bail at the Jefferson Parish Correctional Center. An ICE detainer has been placed on the twin brothers who were in the U.S. illegally.

Immigration and Customs Enforcement detainers have also been placed on Raul and Wilmer Paz-Perez, who are originally from Honduras and were in the US illegally. The immigration status for Elder Paz-Perez was unclear early Tuesday, Cunningham said.

This is beyond disgusting.

Personally, I think anyone who sexually assaults a minor should face the death penalty–preferably using a method that is long, slow, and extremely painful.

I know that the U.S. doesn’t allow for cruel and unusual punishment, but an incident like this makes you wonder if that was the right call.

I hope they catch the third brother and that they all suffer and rot in jail for the rest of their lives.