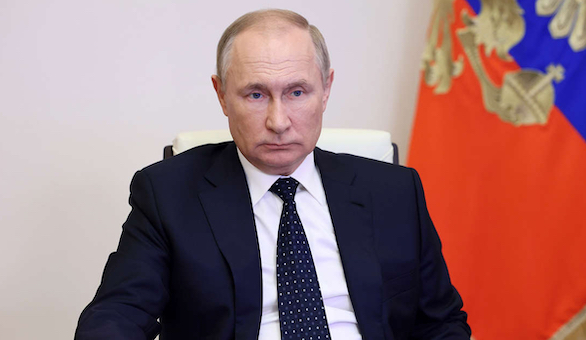 Since November 2021, this site has been sharing reports that Russian despot Vladimir Putin was suffering from a fatal disease, primarily identified as cancer. The most recent reports have discussed the advancement of the disease and how his medicine is affecting his decision-making. Apparently, it has worsened.

"Putin is terminally ill. He will die before the war ends and there will be a transfer of power" – Kyrylo Budanov, Ukrainian Head of Military Intelligence in an interview with @BrittClennett of @ABC pic.twitter.com/L219NIHrhW

A Telegram site SVR General, which has been giving inside info on the Russian military and Putin’s decisions for at least two years, is supposedly run by a former Russian intelligence officer. On Tuesday, January 17, 2023, SVR reported:

According to the estimates of the close circle, Russian President Vladimir Putin has become withdrawn and laconic, practically does not receive anyone, and, in general, looks deeply concerned in recent days. There are several reasons for this behavior of the President. First, Putin is undergoing therapy with the use of drugs that, in addition to the therapeutic effect, cause weakness, dizziness, and lack of appetite, which does not have the best effect on the president’s psycho-emotional state.

General SVR describes Putin as “a terminally ill person with a disturbed psyche.”  He reports that Putin doesn’t look well, “On multiple occasions since the start of the war in Ukraine last year, the Russian strongman has appeared in public looking sickly and unsteady.”

General SVR on Tuesday also reported that Putin is feeling jittery about enacting some “major decisions” that he had recently hinted at, promising that they would have a game-changing impact on Russia’s domestic and foreign policies alike.

“Putin is a rather cowardly person and any changes, even those proposed by him, trigger within him serious fears and concerns,” according to the post.

General SVR said Putin is in the process of figuring out the sequence and time frame of those “decisions,” which could “raise the stakes to a critical level.”

“If the Russian forces’ offensive on the frontline fails and they lose control of even a part of the occupied territories, it would be impossible to convince the ‘elites’ that there could be a ‘victorious’ outcome to the military misadventure,” the anonymous author of the post warned.

General SVR has not ruled out the possibility that Putin would deploy nuclear weapons if his forces in Ukraine falter, but resorting to that would “lead to a general catastrophe not only for Putin, but also for all members of the elite without exception, which would nullify the current regime in Russia and make the chance of the president holding onto power downright illusory.”

SVR claims that the possibility of using nukes is still on the table. Still, it’s hard to believe the Russian military and the Oligarchs, who, among other things, use their riches to help finance Putin, agree to a Putin nuclear strike.

Along with the nuclear possibility, SVR General claims Putin has a plan to introduce martial law, increase the terms of conscription, and much more.

Reuters reports that “Russia could raise the upper age limit for citizens to be conscripted into the armed forces as soon as this spring, a senior lawmaker has said, as part of Moscow’s plans to boost the number of Russian troops by 30%”. The plan is to raise the maximum age of the draft from 27 to 30 and, after three years, raise the lower level from 18 to 21. If Russia is still stuck in a Ukrainian quagmire, they will probably keep the lowest and highest ages making the draft age between 18 to 30.

With the loss of so many soldiers via Putin’s invasion of Ukraine, as well as the recent draft of 300K civilians into the military, an increase of conscripts, and an increase in the length of service in this bloody conflict, will there be an uprising against Putin’s war?

The real question is will Putin live long enough to see it all happen?