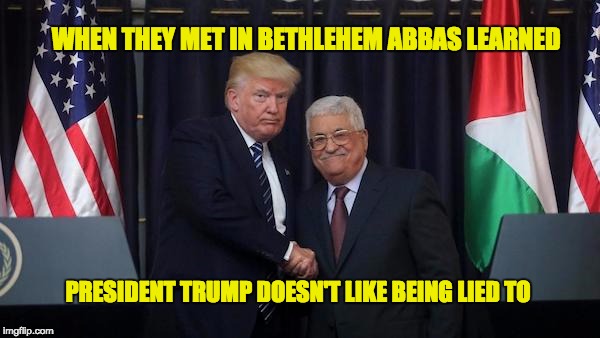 Apparently, President Trump’s meeting with Palestinian Authority Chairman Mahmoud Abbas in Bethlehem on May 23rd wasn’t as pleasant as it seemed.  Trump lost his temper with the Palestinian and yelled at him for not being truthful when the two met in Washington D.C. a few weeks earlier.

According to a report by Israel’s Channel Two an angry Trump yelled at Abbas during their talks last Tuesday because of the Palestinian Authority’s continued incitement against Jews and against Israel.

“You tricked me in DC!” the President was reported to have hollered at the stunned Palestinian, “You talked there about your commitment to peace, but the Israelis showed me your involvement in incitement.” The American source told Channel Two that Trump’s anger was followed by several minutes of shocked silence from the Palestinians–the meeting was very tense before the two sides managed to get back on track.

The two had met at the White House three weeks earlier (May 3rd) and at their after-meeting press opportunity President Trump urged Abbas to put a stop to the incitement.

“… there cannot be lasting peace unless the Palestinian leaders speak in a unified voice against incitement to violate — and violence and hate.  There’s such hatred.  But hopefully there won’t be such hatred for very long.  All children of G-d must be taught to value and respect human life, and condemn all of those who target the innocent.”

Chairman Abbas answered Trump by saying there was no incitement, his people were teaching their kids to be peaceful,

“Mr. President, I affirm to you that we are raising our youth, our children, our grandchildren on a culture of peace.  And we are endeavoring to bring about security, freedom and peace for our children to live like the other children in the world, along with the Israeli children in peace, freedom and security.”

Prime Minister Netanyahu was quick to point out Abbas’ lie. Speaking in Jerusalem the day after the White House meeting he said,

“I heard President Abbas yesterday say that they teach, Palestinians teach their children peace. That’s unfortunately not true. They name their schools after mass murderers of Israelis and they pay terrorists. But I hope that it’s possible to achieve a change and to pursue a genuine peace. This is something Israel is always ready for. I’m always ready for genuine peace.”

Bibi was being truthful, Just take a look at this video from Palestinian Media Watch:

From the time they are very young, the Palestinian Authority teaches its kids to kill Jews via the children’s entertainment on the PA controlled TV station, books, public education, social media, etc. Palestinian streets, squares and entertainment venues are frequently named after terrorists who have murdered Israelis.

Netanyahu offered more than words. Channel Two reported that the Prime Minister followed up by providing the American President with evidence that Chairman Abbas was not only lying, but he was actually participating in the incitement. Abbas is sneaky, he will send a representative to voice the incitement in his name, like the video below also from Palestinian Media Watch: :

“Under the auspices of [PA] Prime Minister Dr. Rami Hamdallah, the [PLO] National Gathering of the Martyrs’ Families [of Palestine] held a Palestinian Martyrs’ Day [event] in Gaza, during which it was demanded to follow the path of the Martyrs until the end of the occupation and the establishment of the Palestinian state.”

During his trip to Saudi Arabia two before he met with Abbas, Trump tried to build a coalition of Muslim states to fight terror. Speaking to a conference of leaders of Muslim countries (and Chairman Abbas) President Trump condemned radical Islamic terrorism and called for America’s partners in the Muslim world to crush the terror threat, adding these powerful words, “Killing in the name of G-d should be an insult to every person of faith. Terrorists do not worship G-d, they worship death.” Obviously, Abbas’ lie about inciting terrorist attacks, contradicted the President’s condemnation of the violence.

Possibly compounding the President’s anger at being lied to by the Palestinian leader was the terrorist attack in Manchester, Great Britain, the night before Trump went to Bethlehem. The homicide booming at an Ariana Grande concert that killed 22 and injured another 116 many of them children.

When the President spoke after his Bethlehem meeting with Abbas he started by offering condolences for the people of Great Britain who suffered a horrible terrorist attack the night before and continued,

“Our society can have no tolerance for this continuation of bloodshed, we cannot stand a moment longer for the slaughter of innocent people.  And in today’s attack, it was mostly innocent children.”

Possibly referring to the disappointment he expressed during the just-completed meeting President Trump spoke about his call made in Saudi Arabia for Muslims to join the fight against terror, before what now seems like a pubic chastisement of Chairman Abbas for his continued incitement of his people to commit violent acts against Israelis and Jews worldwide.

“Several days ago, in Saudi Arabia, I met with the leaders of the Muslim world and Arab nations from all across the region.  It was an epic gathering.  It was a historic event.  King Salman of Saudi Arabia could not have been kinder, and I will tell you, he’s a very wise, wise man.  I called on these leaders and asked them to join in a partnership to drive terrorism from their midst once and for all. (…) I was gratified that President Abbas joined the summit and committed to taking firm but necessary steps to fight terrorism and confront its hateful ideology.  And it’s so interesting that our meeting took place on this very horrible morning of death to innocent young people. Peace can never take root in an environment where violence is tolerated, funded and even rewarded.  We must be resolute in condemning such acts in a single, unified voice”

The report from Israel’s Channel Two, adds perspective to the President’s Middle East trip. The themes of his days in Saudi Arabia and Israel were; ending terrorism and creating peace. Unlike previous administrations, President Trump is not afraid to call out leaders when they oppose his efforts. And he will not only criticize state sponsors of terrorism, but he will even blast the Palestinians for inciting terrorism and violence. That is something we would have never seen from the anti-Israel Obama administration.