We’re Outta There! President Pulling Out Of Paris Climate Accord 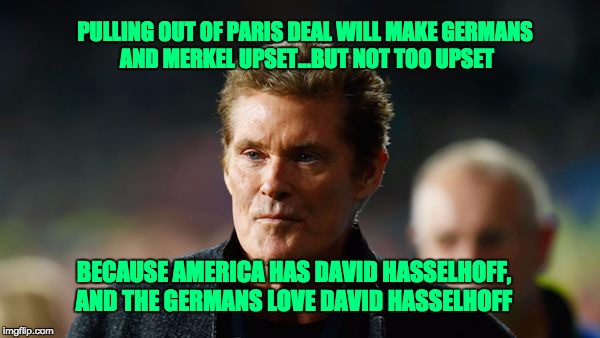 Multiple sources including Fox News and CBS News are reporting that President Trump has decided to withdraw from the job-killing Paris climate accord.  Apparently the execution of the withdrawal is being planned out by a small team including EPA Administrator Scott Pruitt. Axios.com who has been on top of this story all along explains

They’re deciding on whether to initiate a full, formal withdrawal — which could take 3 years — or exit the underlying United Nations climate change treaty, which would be faster but more extreme.

This is a case where former president Obama’s nasty habit of ignoring the constitutional seperation of powers by going around congress coming back to bite him in the arse. He treated the Paris deal as a presidential agreement rather than a treaty which would need to be approved by 2/3 of the Senate (which may or may not have been approved). But once a treaty is approved by the Senate a president can’t pull out of it on his own.

The President’s decision is a good one. Even if one subscribes the climate change hypothesis, if they look at the Paris Agreement rationally they will understand the Paris deal hurts the national economy without making a dent in CO2 levels:

UN climate agreement that is totally meaningless when it comes to the climate. University of Pennsylvania Geologist Dr. Robert Giegengack  has also noted: “None of the strategies that have been offered by the U.S. government or by the EPA or by anybody else has the remotest chance of altering climate if in fact climate is controlled by carbon dioxide.”

“[The Paris agreement] is a fraud really, a fake. It’s just bullshit for them to say: ‘We’ll have a 2C warming target and then try to do a little better every five years.’ It’s just worthless words. There is no action, just promises. As long as fossil fuels appear to be the cheapest fuels out there, they will be continued to be burned.”

Hansen’s rant against the deal is significant as he is such a strong proponent of the climate change hypothesis that when working for NASA, he was caught more than once faking the data to be able to report the Earth was warmer than it actually was.

Other climate experts who have looked at the UN climate agreement think Trump is correct to dismantle it. Danish statistician, author, environmentalist, and professor of political science, Bjorn Lomborg wrote “Trump’s climate plan might not be so bad after all.”‘

Lomborg added that Trump withdrawing from the UN treaty “will will stop the pursuit of an expensive dead-end” because even if you accept the climate claims of the UN, the agreement “will matter very little to temperature rise.”

‘If the U.S. delivers for the whole century on the President Obama’s very ambitious rhetoric, it would postpone global warming by about eight months at the end of the century.

(…) We will spend at least one hundred trillion dollars in order to reduce the temperature by the end of the century by a grand total of three tenths of one degree…the equivalent of postponing warming by less than four years…Again, that is using the UN’s own climate prediction model.’

‘But here is the biggest problem: These minuscule benefits do not come free — quite the contrary. The cost of the UN Paris climate pact is likely to run 1 to 2 trillion dollars every year.’

If the reports are true you will hear the global warming enthusiasts whine that President Trump is destroying the environment, but the truth is that at best the Paris Climate deal may carve a fraction of a degree off world-wide temperatures, will cost over a trillion dollars a year and per Bjorn Lomborg.

A trillion dollars, wow unless you are former president Obama, that’s a huge chunk of change! Of course there is that other issue, the true scientific fact that most who believe man-made climate change ignore, the earth hasn’t warmed in 20 years.

As of April 11, the measured global values continue to decline as do the computed values for April 18.  The time-delayed post El Niño cooling is now showing up in the UAH and RSS satellite data.

Wait a second! Declining? But how could that be?  Isn’t Al Gore producing a sequel to his movie “An Inconvenient Truth” which predicted so many things that never happened? Why would he produce another movie if warming isn’t happening? It can’t just be because of his millions of dollars invested in global warming-related industries. But the last time the Earth as seen warming Bill Clinton was president,Titanic and the first Men In Black were the blockbuster movies, and the kids who graduate high school in a few weeks wouldn’t be born for 2-3 years.
l
With all of the above in mind–ponder this for a moment. The Paris deal will spend a trillion dollars/years and slow the American economy to cure a problem we haven’t seen for twenty years.Even of one is a believer in the climate change hypothesis ask yourself this;  wouldn’t the best way to find a true solution (as opposed to the Paris deal) to make sure that the economy was as strong as possible. The best chance to find a solution is to free-up the economic engine that, built the Juno space probe which took pictures of Jupiter and sent them back to earth this past week, or achieves medical breakthroughs to extend the lives of people once thought untreatable, and so much more? Wouldn’t you want that economic engine to be strong enough to come up with a real solution to the problem?
g
Apparently things at the G7 meeting last week got a little tense because German Chancellor Angela Merkel was upset with President Trump for not committing either way to the Paris deal. Thankfully, Despite Chancellor Angela Merkel’s protestations, President Trump is keeping his campaign to put America First and pull the country out of bad deals, and a deal that does nothing for the environment but hurts the economy is a bad deal.
Eventually Merkel will get over it. The Germans are obsessed with climate change but the also love American singer/actor David Hasselhoff. We will no longer be able to give them our participation in the Paris Climate deal, but they still have America’s Hasselhoff to love.
Facebook Twitter Flipboard