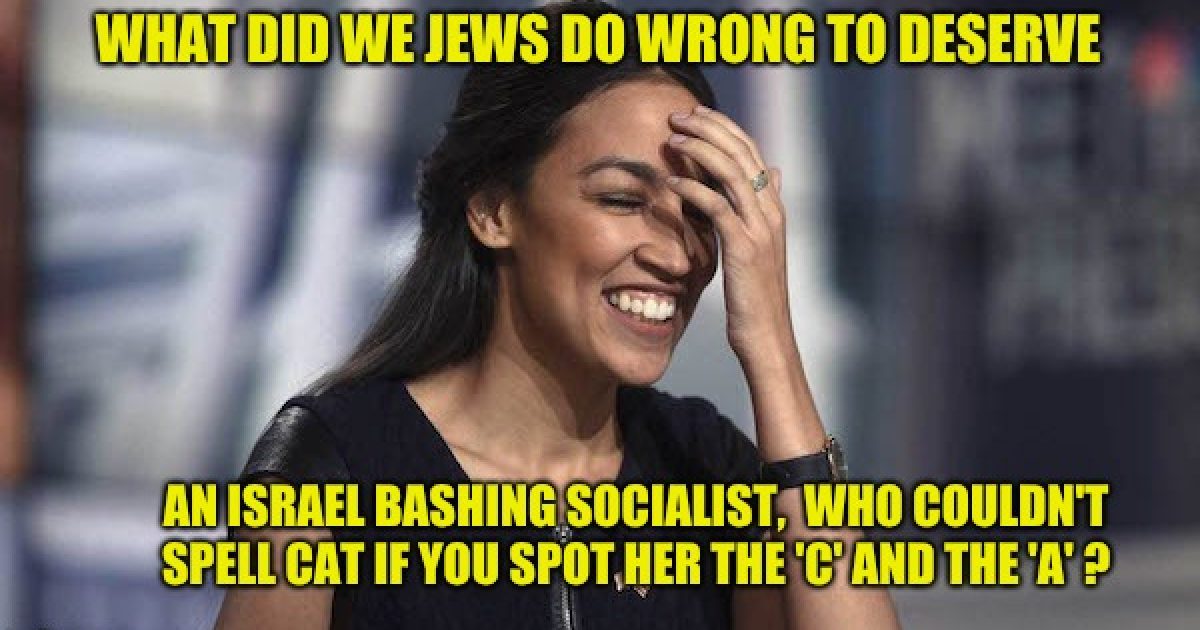 At a Hanukkah party Sunday night, Socialist Congresswoman-Elect, Alexandria Ocasio-Cortez informed the crowd that far back in her lineage were Jews who converted to Christianity because of the Spanish Inquisition.  She claims they fled to Puerto Rico.

JEWS?  Why is she picking on us? Can’t she claim to be a fake Cherokee like Elizabeth Warren, or fake her race like Rachel Doležal?Why can’t she fake being a conservative like John McCain, or become a fake comedian like Jimmy Kimmel?

Ocasio-Cortez made the claim at a party thrown by Jews for Racial and Economic Justice, a very far left organization, and supporter of anti-Semite Linda Sarsour,  and groups such as Black Lives Matter which supports the anti-Semitic BDS movement,  has called for amnesty of all immigrants, and like Ms. Sarsour, Jews for Racial and Economic Justice is a fierce opponent of the Jewish state.

The freshman congresswoman claims of a Jewish heritage doesn’t really ring as true. Historians will tell you that the converts and conversos (people who said they converted but secretly practiced Judaism) who fled Spain went to Portugal, Europe, and North Africa– not the “new world.”  The vast majority actually stayed in Spain. About 2,000 of the conversos were found out to be practicing Judaism and killed.

I get it. The Jews are supposed to be the “chosen people,” but why did Ocasio-Cortez choose us? We already have our fair share of famous embarrassments. Do you realize how hard it is every Father’s Day for Jews to see Woody Allen walk around with his wife/daughter? Who do you think got blamed when Barbara Boxer told General Michael Walsh to stop calling her the military approved Ma’am and start calling her senator. We are stuck with fake war hero Richard Blumenthal. We Jews also have to take the blame for people like Justice Ruth Bader Ginsberg, the obnoxious half of Geraldo Rivera, and Obama’s mouthpiece for anti-Israel propaganda Jeffrey Goldberg. Heck, we get the blame for the stupidity of Whoopi Goldberg and Dianne Feinstein and neither one of them Is Jewish.And don’t forget we’re stuck with Bernie Sanders and Chuck Schumer who doesn’t even know how to wear glasses correctly, and Tom Arnold who converted when he married Rosanne Barr (but as Adam Sandler suggested you guys can have him back).

What did we do wrong to deserve an Israel bashing socialist who couldn’t spell cat if you spot her the “c” and the “a.”  I understand that we live in an age when people can self-identify as anything they want , but this is totally not fair!