CNN: People Of Color Should Not Wear Face Masks 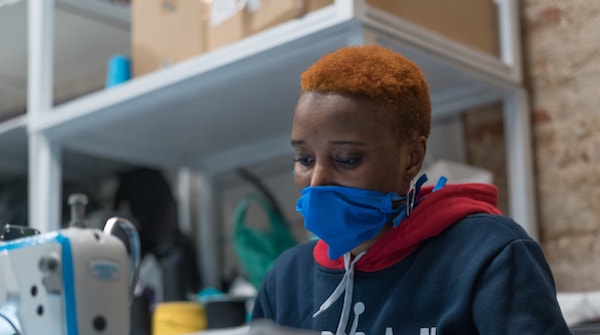 The quote that “Trevon Logan, an economics professor at Ohio State University, will not be following this guidance.”

“We have a lot of examples of the presumed criminality of black men in general,” Logan, who is black, told CNN. “And then we have the advice to go out in public in something that … can certainly be read as being criminal or nefarious, particularly when applied to black men.”

Logan is not alone in his concerns. On social media and in interviews with CNN, a number of people of color — activists, academics and ordinary Americans — expressed fears that homemade masks could exacerbate racial profiling and place blacks and Latinos in danger. And that is the basic content of the article.

Did they actually think this through?  If everyone is wearing some sort of face covering, who is going to stand out to possibly be profiled. People who are joining the crowd and covering their faces or people who aren’t wearing face coverings.

I don’t feel safe wearing a handkerchief or something else that isn’t CLEARLY a protective mask covering my face to the store because I am a Black man living in this world. I want to stay alive but I also want to stay alive.

I am not saying that racial profiling doesn’t exist, sadly, it still does. However, given the choice of being in a store and being asked for my ID or catching something that will kill me, I will make sure to bring the ID.

These two guys were thrown out of a Walmart by some a-hole because they were wearing surgical masks. But this happened on March 27th a week before the CDC recommendation.

After most of the article, where they quote people of color talking about why they don’t wear a mask, we meet one person who thought it through. Her whose comments were included near the end of the piece almost as an after-thought was Che Johnson-Long:

Che Johnson-Long, a black woman who works for the Racial Justice Action Center in Atlanta, says she plans to wear a mask in public.
“I will be wearing a mask because it can protect other people from what I may potentially have,” she told CNN. “But what I will also do while wearing a mask is all the things that I’m already doing as a black person in Atlanta. I will text people before I leave the house so that someone knows where I am. I’ll make sure to travel with someone that I know or to let someone know when I get back home

Look, I am not African American, and while I have faced some anti-Semitic hatred, it is nothing compared to what African Americans face every day. But going outside without covering one’s face not only puts that person in danger but gives their family a higher chance of getting sick. The CNN piece is totally irresponsible.