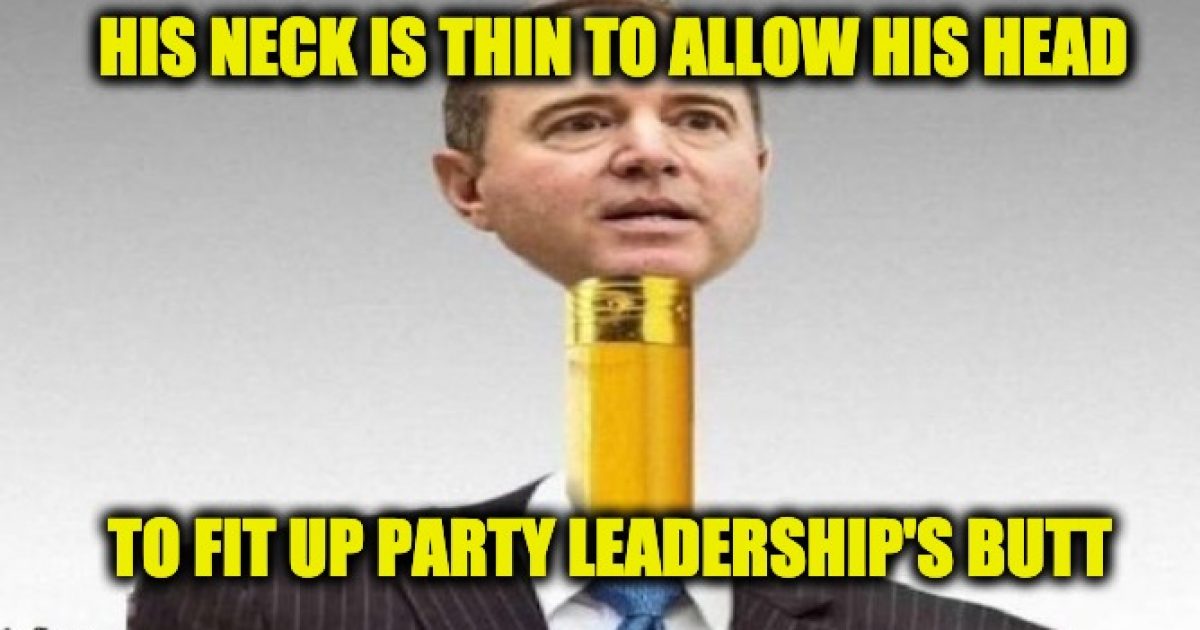 Florida Rep. Matt Gaetz introduced a resolution calling for the resignation of House Intelligence Committee Chairman Adam Schiff over his handling of the Russian collusion hoax.

Schiff has faced repeated calls from Republicans to step down from his post after using special counsel Robert Mueller’s investigation to espouse conspiracy theories and promoting his own position as one of authority to encourage false accusations against the President.

It is a reference to the nickname given Schiff by President Trump, who dubbed him “little pencil neck Adam Schiff.”

Trump told supporters at a rally last month that “he’s got the smallest, thinnest neck I’ve ever seen. He is not a long-ball hitter.”

What the PENCIL Act Says

Aside from taking personal jabs, the resolution demands the California Democrat “be removed from the Permanent Select Committee on Intelligence of the House and that his security clearance should be revoked immediately.”

#BREAKING: Today I filed the “PENCIL Act,” expressing the sense of the House of Representatives that “Congressman Adam Schiff should be removed from the House Intelligence Committee and his security clearance immediately revoked.” pic.twitter.com/1FsMt6NUjr

“How are the rest of us supposed to be able to rely on a man, who you just showed, lied to the American people when he said that there was not spying?” Gaetz asked during an interview with Fox News host Tucker Carlson.

Gaetz has called for Schiff to resign previously, noting that the high-ranking Democrat tried to secure compromising material on President Trump from a foreign official.

Schiff was duped by a pair of Russian comedians posing as a Ukrainian member of Parliament who promised naked photos of Trump that had been seen by Vladimir Putin.

While he claimed to know the phone call from the pranksters was bogus, Schiff still went so far as to arrange for staff to collect “classified material” for the FBI. Whether it was real or not.

https://t.co/D6OfPIP6EU CAUGHT! Adam Schiff gets caught in prank call from Russian comedians. He was trying to dig up dirt on Trump in a secret call with Russian agents. He didn't know he was being pranked. He was promised nude photos of @realDonaldTrump . Must listen

Fox News host Sean Hannity said he was compiling information from the incident into a ‘dossier’ against Schiff.

“[Schiff] has gone from having an oversight responsibility to an actual principal in this investigation for engaging with ‘Ukrainians,’” Gaetz charged at the time.

Others Demand He Resign

Gaetz isn’t the only lawmaker or pundit calling for Schiff to step down, not by a longshot.

House Minority Leader Kevin McCarthy demanded he steps away from his role as chairman, adding that Schiff “owes the American public an apology.”

“You used your unique position on the Intel Cmte to convince the American people that you had access to evidence of collusion,” Crenshaw added. “You lied and misled in order to pursue your political agenda. Move on.”

And President Trump himself called for the forced resignation of the embattled lawmaker.

“Congressman Adam Schiff, who spent two years knowingly and unlawfully lying and leaking, should be forced to resign from Congress!” the President said on Twitter.

Will the PENCIL Act be enough to make that happen?

I doubt it, first of all, Pencil Act is not a law, but a sense of Congress resolution. And the biggest obstacle is that it probably will never come to the floor for a vote as the House is run by Nancy Pelosi and her leftist lemmings.

The text of the Pencil Act follows.

Expressing the sense of the House of Representatives that Congressman Adam Schiff should be removed from the Permanent Select Committee on Intelligence of the House and that his security clearance should be revoked immediately.

Whereas Congressman Adam Schiff is the Chairman of the Permanent Select Committee on Intelligence of the House of Representatives;

Whereas by virtue of this Chairmanship, Congressman Schiff is a member of the ‘‘Gang of Eight’’, a group of eight members of Congress who access, review, and analyze America’s most sensitive intelligence, including covert actions, as set forth in section 503(c)(2) of the National Security Act of 1947 (50 U.S.C. 3093(c)(2));

Whereas because not all members of Congress can access, review, and analyze all intelligence presented to the Gang of Eight, each member must be able to rely upon the judgment, integrity, and truthfulness of each member of the Gang of Eight to serve Congress’s overall decision- making functions;

Whereas Gang of Eight members must be credible when sharing their reactions to America’s most sensitive intelligence information;

Whereas Congressman Schiff can no longer be trusted by his colleagues in Congress or the American people;

Whereas every Republican member of the Permanent Select Committee on Intelligence has signed a letter stating that they have no confidence in Congressman Schiff as Chairman;

Whereas Congressman Schiff has repeatedly slandered President Donald J. Trump by falsely claiming he colluded with Russia to win the presidency;

Whereas in March 2017, Congressman Schiff falsely claimed the Trump campaign accepted help from the Russian government to win the presidency;

Whereas in December 2017, Congressman Schiff falsely claimed ‘‘the Russians offered help, the campaign accepted help, the Russians gave help, and the president made full use of that help’’ when referring to unsubstantiated claims of collusion between President Donald J. Trump and Russia;

Whereas in January 2019 Congressman Schiff claimed there was ‘‘clear evidence on the issue of collusion’’ between the Trump campaign and Russia;

Whereas in February 2019 Congressman Schiff claimed there was ‘‘ample evidence of collusion of the campaign’’ colluding with Russia;

Whereas Congressman Schiff said in April 2019 he does not regret calling out President Donald J. Trump over baseless and disproved allegations of collusion with Russia;

Whereas the principal conclusions of the Mueller Report determined there was no collusion between the Trump Campaign and Russia;

Whereas Congressman Schiff continues to claim there is ‘‘ample’’ evidence of Trump-Russia collusion ‘‘in plain sight’’ without offering any evidence to prove his claims;

Whereas Congressman Schiff has demonstrated a blatant bias in the performance of his official duties as Chairman of the Permanent Select Committee on Intelligence; and

Whereas Congressman Schiff has proven himself untrustworthy by advancing falsities about the President of the United States, Donald J. Trump, as relating to unfounded allegations of collusion with the Russian Federation:

Now, therefore, be it Resolved,

This resolution may be cited as the ‘‘Preventing Extreme Negligence with Classified Information Licenses Resolution’’ or the ‘‘PENCIL Resolution’’.