Pelosi Inflation Act: ‘Mother Earth Gets Angry From Time To Time, And This Legislation Will Help Us Address All Of That’ (Video) 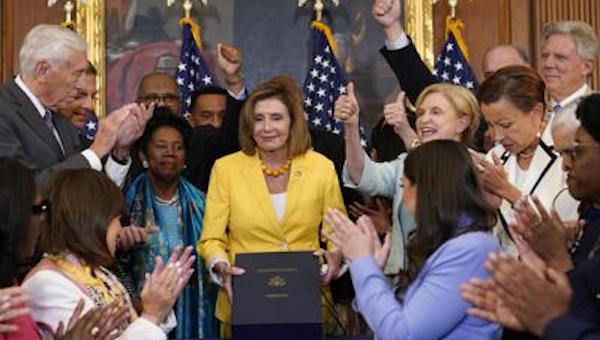 We’ve heard a lot of stupid things come out of Speaker Nancy Pelosi’s mouth.  But this one takes the cake.  In fact, it can be ranked right up there with her now infamous “we have to pass the bill so that you can find out what is in it” statement.

On Friday, the  Democrat-led House of Representatives passed the $740 billion boondoggle known as the “Inflation Reduction Act,” which will do just about everything BUT reduce inflation.  Not only will inflation continue to rise, but so will our taxes.  And let’s not forget the 87,000 armed IRS agents that will harass and hound Americans to kingdom come.

Fortunately, not a single Republican voted for this steaming pile of fetid garbage.  And that didn’t sit too well with Pelosi, who not only attacked Republicans but falsely claimed they voted “against the planet.”

Then she invoked “Mother Earth” and claimed the bill would appease the mythical goddess.

“How can they vote against the planet?” Pelosi said.  “Mother Earth! Mother Earth gets angry from time to time, and this legislation will help us address all of that.”

NANCY PELOSI: "Mother Earth gets angry from time to time, and this legislation will help us address all of that."

Reaction to Pelosi’s statement was pretty much what you’d expect.

So literately faith based legislation https://t.co/4w8vyggy5Y

We are all pagans now, evidently.

We have an earth that is alive but act as if God is dead. https://t.co/ALLyMKMBqN

Congressional Democrats actually believe~
Their Legislation will Control the Earth 😂

Once upon a time~
When we lived in a rational world ~
This would be call, Insanity ..🤣pic.twitter.com/sHsH3RMxHt

True.  But as Twitchy noted, the lunatics are in charge now.

Mother earth does get testy when you try to dig down to China from the beach. https://t.co/j4ahi2A5m9

While sane people laugh at this, it is the perfect formulation for people who have adopted climate alarmism, with all its symbols, rituals, and arcane dogma, as their state religion. https://t.co/YDX5I6ZgdT

Ah yes Nature worship. We’ve regressed right back to the dawn of man. Ironically Pelosi may well be the only person who was there the last time around.

Poisoning the planet, to save the planet https://t.co/8Fa2yfGGde

Pretty much. That’s the Democrat way.

And apparently – only American fossil fuels etc can be pollutants.
Once we sell our Strategic Reserve oil to China – it becomes – magically- carbon neutral.
And the hundreds of coal fired power plants China and India are building are “Clean energy”

Amazing how that works, isn’t it?

Why is America the only nation spending so much money, billions for “Mother” Earth (which they claim is a racist term).
Earth belongs to all nations.

Why? Because these projects will be given to groups who will donate back to Democrat candidates. 1 for you, 2 comes back to me.

And there is the real truth of the matter.

This, ladies and gentlemen, is your modern Democrat Party at work.  It’s time to remove every single one of these creatures from office.  Before they start sacrificing virgins to ancient mythical beings…