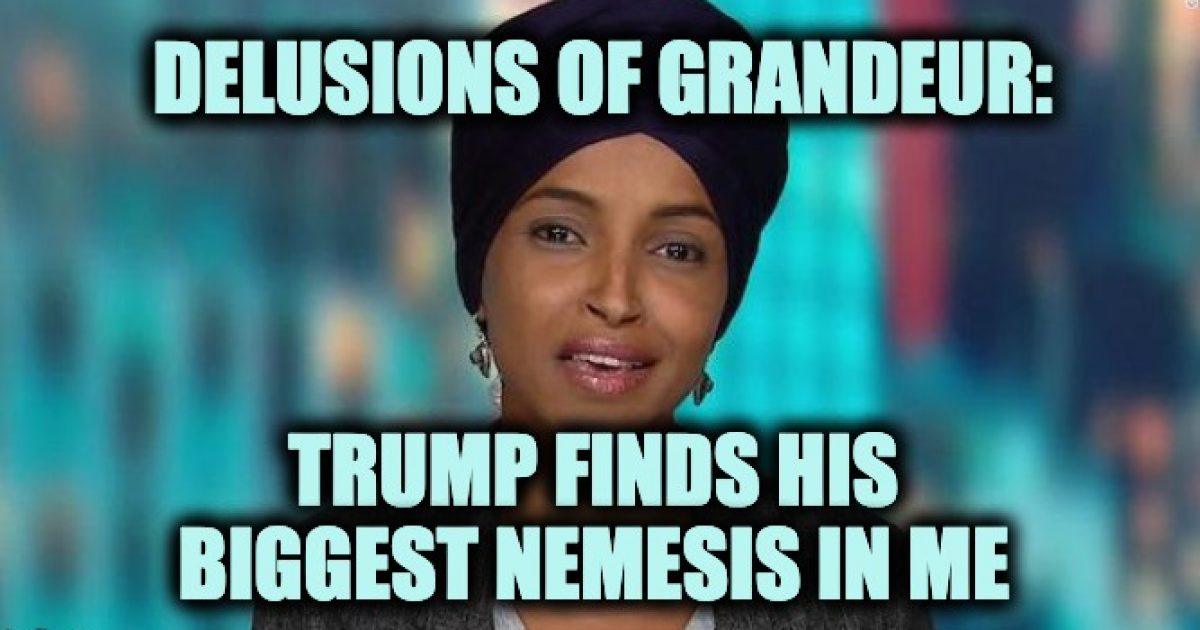 Representative Ilhan Omar says that she has been President Trump’s “biggest obstacle” since day one. Omar Trump obstacle

The original post was in response to a campaign video that shows a compilation of unhinged Democrats screeching about impeachment, led first by an image of Omar. She later says in the video, “In the question of impeachment, it’s about time.” The individual who posted the sentiment has very few followers, suggesting Omar’s sharing of the message was a vanity play. The Minnesota Democrat has had nearly zero effect on the day-to-day operations of the White House.

Somehow, her image being used first despite so many other equally kooky liberals in the video is a sign that Omar is the real threat to the President.

“The fact that the first image is of [Omar] shows you that she’s been Trump’s biggest obstacle from day 1,” the retweeted note states. “She’s been living in his head rent free this whole time.”

HUH? I think its time for that tweeter to get a visit from the folks who will bring him a nice jacket with the long sleeves that tie in the back.

The fact that the first image is of @IlhanMN shows you that she’s been Trump’s biggest obstacle from day 1. She’s been living in his head rent free this whole time. #ImpeachmentNow https://t.co/DQhaMxnPDu 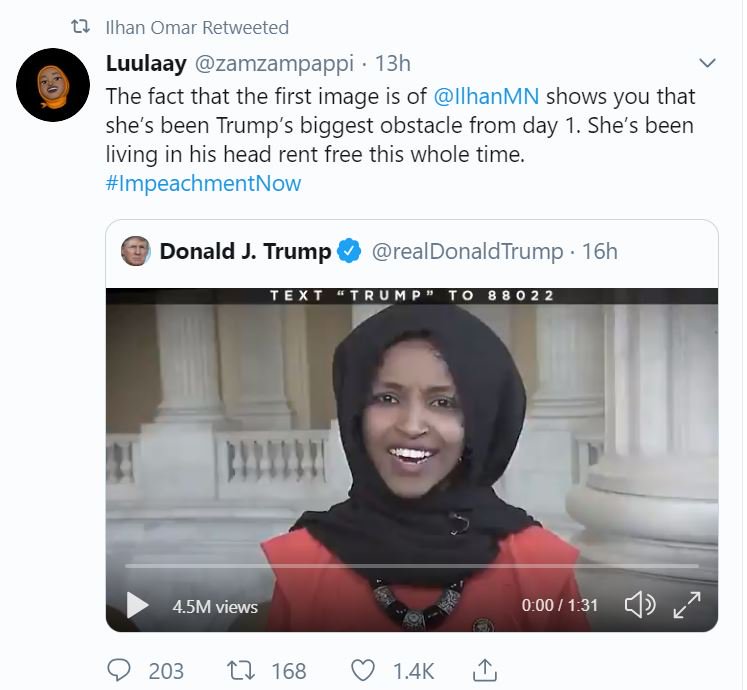 It’s not the first time Omar has shared fantasies about being some sort of crucial nemesis to the President. In fact, the radical Democrat declared herself an absolute “nightmare” and Trump’s “biggest nemesis” in an interview for the Huffington Post.

“Clearly, I am a nightmare ― because [Trump] can’t stop really thinking about ways that he can continue to use my identity to marginalize our communities,” Omar accused. “It’s not a surprise that he finds his biggest nemesis in me.”

The fact that she’d promote such a ridiculous thought, actually, shows Trump is and always will be living rent-free in Omar’s head.  I promise that the president has never lost a moment of sleep because of you.

This is a president who has come to power vilifying and demonizing immigrants and refugees. He proudly said we should halt Muslims from entering our country.

It’s not a surprise that he finds his biggest nemesis in me. https://t.co/vl7tjmnSFr

No, Ms. Omar, now that we know House Speaker Nancy Pelosi is taking marching orders from your little ‘Squad,’ one could argue you’re one of the best things that could have ever happened to his re-election odds.

Voters are vehemently opposed to your impeachment efforts, just as they are opposed a socialist who thinks 9/11 was the result of “some people [doing] something,” someone who feels the American military is somehow equal to al-Qaeda, someone who trashes heroes who died for their country and someone who hates Jews.

Biggest obstacle? The only thing she is an obstacle to is the future of her congressional district.  She’s been nothing but a boon for Trump’s campaign.