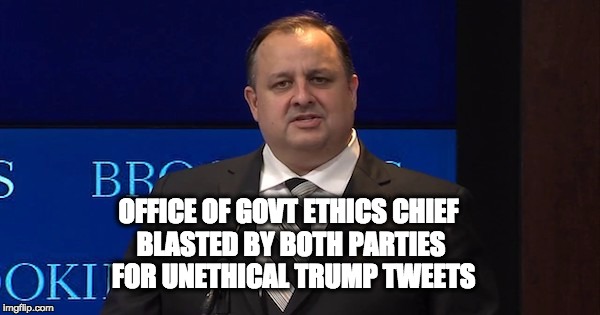 Office of Government Ethics Director Walter Shaub was called to the woodshed by Democratic and Republican members of the House Oversight Committee for his “highly unethical” behavior relating to President Trump in recent months. Shaub was accused of adding partisanship to this non-partisan executive branch agency.

The closed-door meeting was called by Chairman Jason Chaffetz (R-UT), after Shaub blasted then President Elect Trump outlined his plan to turn the management of his business interests to his two oldest sons, Donald Jr and Eric.  The Office of Government Ethics director took to twitter and Trump’s plans to satisfy ethics concerns as “wholly inadequate.” Shaub followed up by demanding that Trump completely divest from his businesses.

Rep. Chaffetz, also pointed out that Shaub donated a total of $500 to Obama’s 2012 reelection campaign:

Ranking member Rep. Elijah Cummings (D-MD)  said lawmakers from both parties were troubled by Shaub’s initial “bravo” tweets, sent soon after Trump was elected president. Shaub’ congratulated Trump for agreeing to divest from his business, but the President Elect hadn’t said he would divest.

Chaffetz said he and other lawmakers told Shaub they were frustrated by the tweets, calling them unproductive and distracting.

“I don’t think it solves the challenge. It’s not their role,” Chaffetz said, adding that he believes Shaub received the bipartisan message at Monday’s meeting.

Asked if he has confidence in Shaub, Chaffetz said: “I think we better understand each other.”

Shaub called the meeting productive and said lawmakers were “candid” in their remarks. “I think it was extremely useful,” he said.

While the attention has primarily focused on recent events, as Americas Rising PAC points out this is not the only case of Shaub’s partisanship. In the timeline below, one can see that Shaub had one set of rules for the Clintons and has another one for Republicans today: