Report: Obama Thinks Bernie is ‘Unfit’ and Must Be Stopped 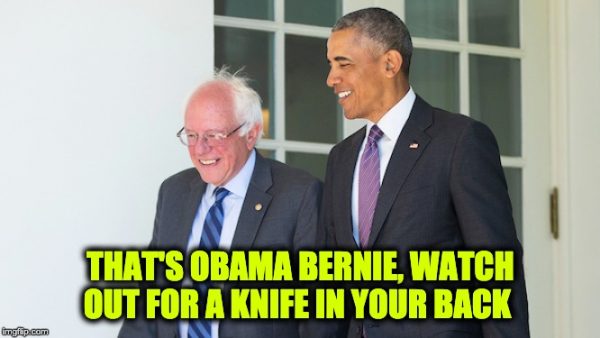 A Fox Business report indicates former president Barack Obama fears Bernie Sanders’ rise in the polls is bad news, and he may step in to stop him.

Sanders is beginning to strengthen his position in national and early state primary polls amongst a weak field of Democrat candidates.

Sources in the Democrat party indicate Obama could intervene as he continues to grow “wary” of the Vermont socialist’s rise.

“[Obama] has recently grown even more wary of Sanders as the Vermont senator appears to be gaining momentum in polls,” according to the network.

“Obama has told people in private that Sanders is both temperamentally and politically unfit to beat Trump in the 2020 general election, these people say,” Fox Business reports.

SCOOP: Dem Party sources who have spoken w @BarackObama say former prez is growing increasingly anxious about @BernieSanders rise in the national polls & where the avowed socialist would take the country; he is considering a public statement addressing it more now @FoxBusiness

Wants to Stop One Socialist But Not the Other

Remarkably, the sources also indicate that while Obama seeks to stop Sanders over his extreme socialist platforms, he seems perfectly content with allowing another candidate equally as extreme to rise to the top.

Meanwhile, “Obama’s opinion of [Elizabeth] Warren has softened since November, and he is said to be growing comfortable with endorsing her fully if she should win the nomination.”

Obama threatened to intervene in the primary against Bernie months ago. pic.twitter.com/fJWwTDSvck

Why Warren and Not Bernie?

So why one extremist and not the other? The difference seems to be that one of these two socialists is a woman.

“Now women, I just want you to know; you are not perfect, but what I can say pretty indisputably is that you’re better than [men],” he told the audience.

Former Pres. Barack Obama suggests nations would improve "across the board" with women in control. https://t.co/Itd0MdRWrY

Competing media outlets have suggested Fox Business may not be a reliable source for these Democrat sources familiar with Obama’s thinking.

Daily Beast reporter Sam Stein tweeted that “actual sources in Obama world are giving a collective LOL to the idea that he is considering putting out a statement warning against Bernie.”

The reality is Obama has made clear statements in opposition to Sanders for quite some time.

Politico reported back in November that Sanders would be the one “exception” to Obama remaining quiet and supporting whomever the Democrat nominee may turn out to be.

“Back when Sanders seemed like more of a threat than he does now, Obama said privately that if Bernie were running away with the nomination, Obama would speak up to stop him,” Politico claimed.

Prior to that, the former President met with a group of freshman lawmakers warning against their extremely costly and radical programs, particularly those put forth by members of the ‘squad.’

“He said we [as Democrats] shouldn’t be afraid of big, bold ideas – but also need to think in the nitty-gritty about how those big, bold ideas will work and how you pay for them,” one person told the Washington Post.

“Some people in the room took his words as a cautionary note about Medicare-for-all and the Green New Deal,” the column notes, “two liberal ideas popularized by a few of the more famous House freshmen, including Rep. Alexandria Ocasio-Cortez.”

They are two liberal ideas vociferously supported by Sanders, who has since been endorsed by Ocasio-Cortez and the ‘squad.’

What must it say for Obama, a man who openly supported massive government expansion and intrusion into the American people’s lives, that he thinks Sanders is a bit too radical?

Bernie’s rise and Obama’s intervention would be nothing but good news for President Trump. It would alienate and pump the brakes on motivation for Sanders’ supporters who feel establishment Democrats stole the nomination from him last presidential election cycle.