When The Obama Administration Became The Deep State 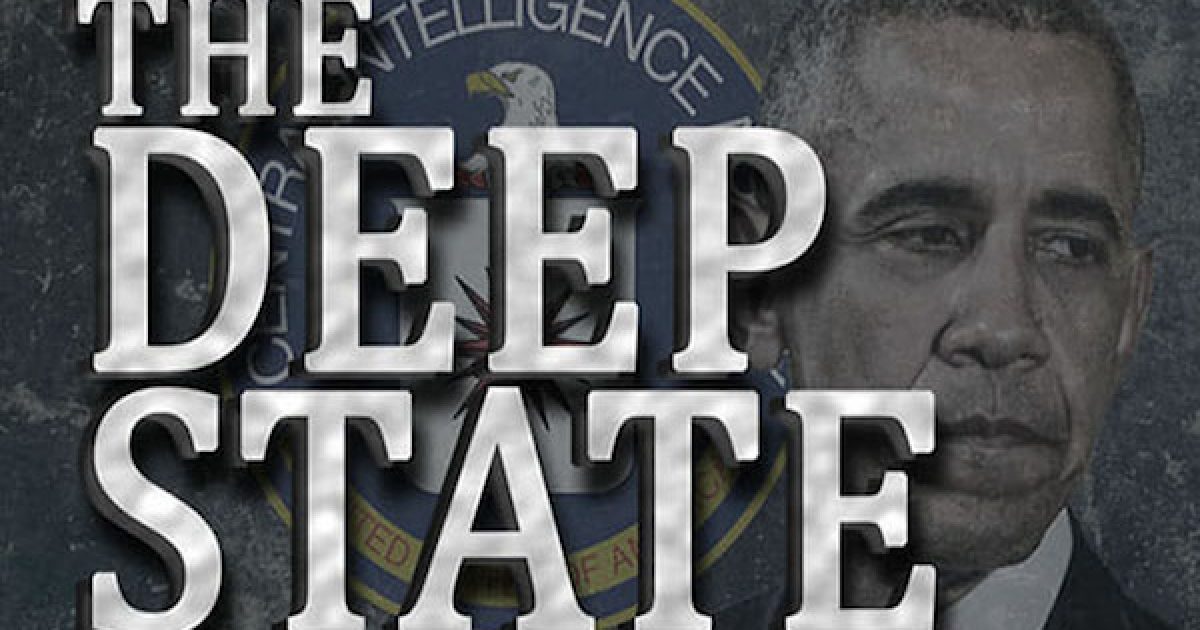 In early January 2017, then-President Barack Obama, SHMOTUS Joe Biden, and a small sub-group of the national security team began their transition to what’s commonly called the “Deep State.” Based on the footprints they left behind we can tell that they took time from their real jobs of running the country, this proto-deep state planned, coordinated, and leaked a timed media burst of articles about Trump and Russia. Each of the stories was leaked to different outlets.  Each story was published between the 10th and 12th of January. This was the turning point when the Obama Administration became the deep state.

At NRO on Tuesday, Andrew McCarthy came to an important conclusion about the Trump-Russia investigation.  It has been increasingly clear that the investigation – to the extent we may call it that – started quite a while before 31 July 2016, the date long given for its formal launch.  McCarthy suggests it began in the early spring, probably around the end of March.

Dating the focused tracking of Trump personnel to that early period forces the critical conclusion McCarthy ends with:

The Trump-Russia investigation did not originate with Page or Papadopoulos. It originated with the Obama administration.

The investigation, in the form we now know it took, could not have started with Page or Papadopoulos, because at that point, they hadn’t done the things that supposedly cued the investigation.

Page hadn’t gone to Russia to give a speech (July 2016), and Papadopoulos hadn’t been told yet about the supposed Russian hacking of Hillary’s emails (April 2016), much less passed that tidbit on to Australian Alexander Downer (May 2016).

But McCarthy’s point that the Trump-Russia investigation originated with the Obama administration is the crucial thing here.  The significance of it is that it means the Obama administration decided how to handle something it could have treated differently.  That decision – its nature and motives – and not a triggering “intelligence” event that set things in automatic motion was what created the “Trump-Russia” narrative and its sequence of events.

It’s an outstanding thing to have someone of McCarthy’s stature reach that conclusion.  As regular readers know, I concluded that some time back.  (And I am increasingly convinced that the “Trump-Russia” narrative is more like a campaign than a law enforcement investigation and that it started somewhat earlier than March 2016.  But let that go for now.)

Also on Tuesday, journalist Sharyl Attkisson reported on some emails recently obtained by Senator Ron Johnson (R-WI) from the Justice Department IG.  In those emails, senior FBI officials referred to something called the “sensitive matter team,” which Attkisson identifies as the small group of persons who knew about the Trump-Russia matter.

Attkisson focuses on emails in the first week of January 2017, starting with one on 6 January indicating James Comey was to brief Trump on the intelligence community (IC) assessment about Russia, including the two-page summary of the Steele dossier.

As we have learned since Comey indeed gave that brief.  Attkisson quotes next from a follow-up email sent the next day:

The next day, Comey reported on his briefing in an email to FBI Deputy Director Andrew McCabe, FBI General Counsel James Baker and Chief of Staff Rybicki. (All four men have since resigned or been fired from the FBI.)

“I said there was something [Director of National Intelligence James] Clapper wanted me to speak to [President Elect Trump] about alone or in a very small group,” Comey wrote in the email. “I then executed the session exactly as I had planned…I said media like CNN had them and were looking for a news hook.” (Clapper now works as a CNN contributor.)

This is a significant passage, confirming for us three things that have been hinted at or deduced before, but not validated for the public as clearly as they are by appearing, baldly, in an email from Comey.

First, both the FBI (and hence the DOJ) and the intelligence community leaders were involved in the same project to frame intelligence about Russia and Trump in a specific way.

Second, the intelligence community was an active participant in that.  James Clapper was no half-asleep bystander; he wanted Comey to brief Trump on the dossier portion of the IC assessment on Russia.

Third, both parties – intelligence and law enforcement – knew the media had the information they were briefing to Trump.  And that knowledge was a primary driver for giving him the brief.

Again, we have considered this to be established for some weeks now.  But the Comey email shows that it isn’t going to be un-established for us.  This is it.  This is our baseline going forward.

The leaders of the law enforcement and intelligence communities, and the media were in the loop on this.

The brief to Trump took place on 6 January.  Now let’s look at the other events from the period 3-12 January 2017.

On 3 January, James Clapper and Loretta Lynch promulgated a quiet but significant revision to Executive Order 12333, which governs the internal handling of NSA surveillance data by federal agencies.  The effect of their changes was to loosen the controls on what federal employees do with that data.

Most of the actual data-handling this revision would cover had already happened in 2016, or even before.  This was (in part) a CYA move.  It relates directly to every instance we’ve encountered of the Obama administration using NSA surveillance against the Trump team, and it clarifies that Lynch, as well as Clapper, knew what was going on.

On 5 January 2017, Obama was briefed on the IC’s Russia assessment and the dossier.  With the recent focus on the FBI and the DOJ, we have tended to forget that others among the most senior national security officials were involved – and they were present at the brief to Obama.

Susan Rice left the information trail on that in her curious email for the record filed just after noon on Trump’s inauguration day, 20 January 2017.  Here is what she recorded:

On January 5, following a briefing by IC leadership on Russian hacking during the 2016 Presidential election, President Obama had a brief follow-on conversation with FBI Director Jim Comey and Deputy Attorney General Sally Yates in the Oval Office.  Vice President Biden and I were also present.

Comey, the man with the “sensitive matter team,” was there.  Susan Rice, unmasker-in-chief, was there.  The “IC leadership” was there, indicating Clapper and probably CIA Director John Brennan, the chief instigator behind the IC assessment.

Clapper and Comey both knew what the media already had on the dossier and the IC assessment.  Clapper had signed the revision to E.O. 12333 in December. He would have known exactly why he was signing it: (again, in part) to provide cover for the handling of NSA surveillance data engaged in by (at the very least) Susan Rice and John Brennan – and possibly, in a different form, James Comey’s people too.

In other words, this small group knew about everything significant to the progress of the “Trump-Russia” campaign.  The FBI “investigation,” the hundreds of unmaskings, the dossier, the FISA warrant applications in 2016, the electronic surveillance of the Trump team, the “secret task force” set up in August 2016, and, of course, how much information the media had was all part of the plan. This small group knew about it all because some of its members, and/or their surrogates, were in contact with the media.

Obama was there too, as was Joe Biden.

On 6 January, Comey (and others) gave the brief to Trump.

On 8 January, Andrew McCabe, presumably a member of Comey’s sensitive matter team, sent an email of his own:

“CNN is close to going forward with the sensitive story,” McCabe wrote. “The trigger for them is they know the material was discussed in the [presidential] brief and presented in an attachment.”

We don’t know who besides these FBI officials knew that CNN was getting ready to move on the story.  But this email tells us McCabe, Comey, and Rybicki knew.

On 10 January 2017, CNN and BuzzFeed published what they had been waiting for:

On Jan. 10, CNN published a story headlined, “Intel chiefs presented Trump with claims of Russian efforts to compromise him.” The same day, BuzzFeed News published the contents of the “Steele dossier.”

But don’t forget what happened two days later.  The Washington Post, on 12 January, published the article by David Ignatius about the December 2016 phone calls between Michael Flynn and the (then) Russian ambassador, Sergey Kislyak.

That information was highly classified and came from someone with a clearance.  Frankly, I wouldn’t put my finger on the scale either way, as to whether it came from the FBI or another agency.  Given what we know about the free-range unmasking going on at the NSC, as well as the execution of the Carter Page FISA surveillance – which probably brought Flynn’s communications under inspection – we have no reason to make conventional assumptions about who acquired the surveillance data, and who passed it on to the media.

What we can say with confidence at this point, however, is that the unauthorized disclosure about the surveillance of Flynn was part of the same effort reflected in the other actions recorded between 3 and 12 January 2017.

It was a disclosure to the media, one that served the same purpose as facilitating publication of the Steele dossier and the IC assessment: i.e., undermining the incoming Trump administration.  And it occurred because the same people who were in the 5 January meeting with Obama were in contact with the media – even if those specific individuals weren’t the ones who made the Flynn disclosure.

(As I and others noted back in early 2017, there was actually what looked like a timed media burst of articles about Trump and Russia, in different outlets.  All of them surged out between 10 and 12 January.)

Everything that matters about the Trump-Russia campaign came together in that brief period of just over a week in January 2017.  The bookends are the relaxation of data-handling rules for NSA surveillance, on 3 January, and the egregious mishandling of NSA surveillance data on or before 12 January.  In the middle, we see the gathering of individuals and the “work product,” if you will, that tell us pretty clearly what this enterprise was, and who was involved in it.

Obama, Biden, Rice, Lynch, Clapper, Brennan, Comey, some number of subordinates – and the media, who were waiting to publish until after Trump had been briefed on the dossier, something only the people in that small group on 5 and 6 January could certify for them.

If this was ever an FBI “investigation,” that’s not what it was by 5 January 2017.  I am gratified to see Andrew McCarthy conclude that the Obama DOJ and FBI would have done different things in 2016 if they were really treating it like a good-faith “investigation.”  Unfortunately, there is no evidence that they were treating it as an actual investigation at any time.

But surely, if there was still any question what it was not, that period in January had to provide the answer.  A nearly silent, last-minute loosening of arcane federal security rules, followed by a pair of top-level briefs designed to unleash a media onslaught, including the illicit disclosure of highly classified information, is not what any actual law enforcement investigation ever looked like.

This was something else.  And we have the list, in this article, of the people who knew about it.