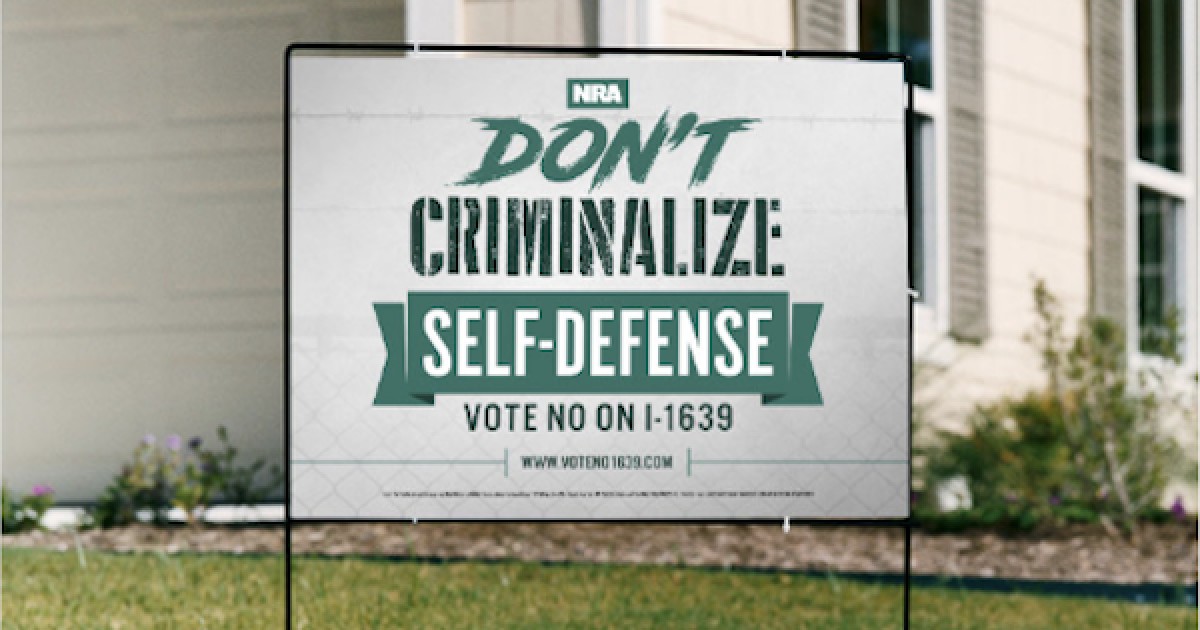 Someday when they talk about organizing grassroots activism, they will have to include at least one lesson on how the National Rifle Association mounted its effort to help Washington State gun owners fight a far-reaching gun control measure that, among other things, would treat simple .22-caliber rimfire hunting and target rifles as “semiautomatic assault rifles.”

Initiative 1639 also seeks to strip young 18-to-20-year-old adults of their Second Amendment rights on the argument that, “studies show that eighteen to twenty-year-olds commit a disproportionate number of firearm homicides in the United States and research indicates that the brain does not fully mature until a later age.”

On the other hand, the supporters of this measure fully expect those same immature young adults to help pass I-1639, thereby surrendering a right enumerated in both the state and federal constitutions.

It’s as though the Seattle-based gun prohibition lobbying group behind the initiative were telling these military-age citizens, “Hey, we think you’re old enough to join the military and maybe lose your life in combat, but you’re too stupid to buy and responsibly own a firearm, so we want you to vote away a fundamental right.”

BATTLEGROUND 2018: Evergreen State gun rights activists are hoping their effort gets support from gun owners in other states who see the proverbial “writing on the wall.” If this initiative succeeds in Washington, it will be tried elsewhere. Washingtonians hope to stop this north of the Columbia River before it spreads.

What the NRA has done is create a website that allows people of all ages to download yard signs, bumper stickers, t flyers, and posters. Thus making it easy for those in the targeted age group – people most likely to be computer savvy enough to crank all of these things out by the bushel – to protect the rights that I-1639 backers expect them to discard until age 21.

This is hardly a fun-and-games political battle. Washington State has become “ground zero” in the gun control versus gun rights battle in 2018. I-1639 had been disqualified from the ballot by Thurston County Superior Court Judge James Dixon because the initiative petitions did not comply with the letter of Evergreen State election law. One week later, the liberal state Supreme Court reinstated the measure, a move that has infuriated and energized the grassroots.

The billionaire-backed initiative would also require a ten-day waiting period, registration of all semi-auto rifles and annual background check review of owners, so-called “secure storage,” and a waiver of medical privacy by anyone wanting to purchase such a firearm:

Among the more egregious provisions of the measure, according to critics, is that it broadly encompasses all semiautomatic rifles, including widely popular .22-caliber rimfires such as the Ruger 10/22, Marlin Model 60, Browning SA-22 and Winchester Model 74. Those are popular “first guns” for young hunters and recreational shooters. Here’s the definition of a “semiautomatic assault rifle” found at the bottom of Page 27:

One can bet that a lot of those affected .22-caliber rifles will be in use during this fall’s hunting seasons for grouse and rabbits, which opens this Saturday, Sept. 1.

While the NRA’s “Vote NO” effort is getting attention, it’s not the only opposition. SaveOurSecurity.net has been busy for a couple of months, under the chairmanship of veteran gun rights activist Phil Watson, a Washington State resident.

And Butch Elrod, an activist grassroots organizer based in the Tri-Cities area (Kennewick, Pasco, and Richland) of south-central Eastern Washington, has also been busy organizing opposition with a project to turn every gun store in the state into a “Second Amendment Activist Center.” His Washington 2A Facebook page traffic has quadrupled in recent weeks.

Even with this great NRA involvement, it still translates to a David v. Goliath contest. But the activists now giving their campaign momentum are reminding anyone who listens that David won that fight.

Below is another example of the information the site provides the grass-roots: