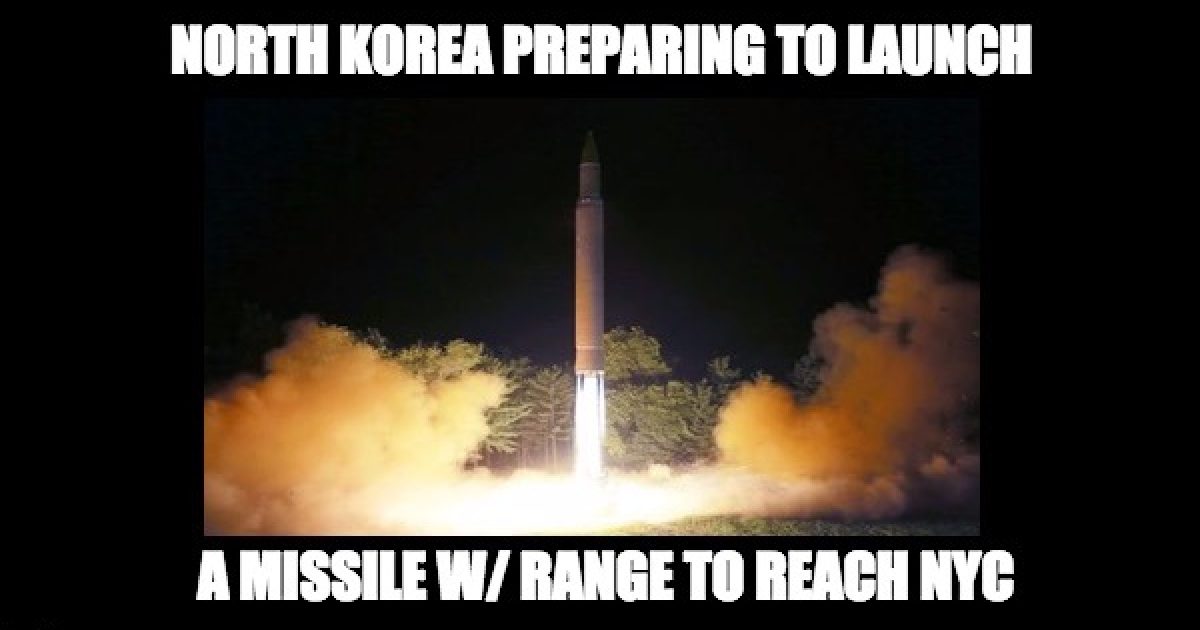 Also being threatened by the diminutive North Korean tyrant with the funny hair, it is no surprise that Japan is monitoring the moves of the Pyongyang government. The Japanese military has discovered a major threat to the United States and Japan.  North Korea is preparing to launch a bigger ballistic missile, one with a range that will easily reach across the United States hitting New York or any other east coast target

“North Korea is ready to launch an intercontinental ballistic missile with a range of 8,000 miles, Japanese military sources have claimed.

“Maniac despot Kim Jong-un has begun moving the rockets into position according to several military sources.

“One of the sources says that movement of one of the launch pads was first noticed yesterday morning – and according to its size it is large enough to fire a carry an ICBM class Hwasong-14 ballistic missile with a range of 13,000km (8,000 miles).

“The UK is almost 5,400 miles from North Korea – while the [east coast of the] US is just over 6,5000 miles away, putting it well within target range.

“Japan – which has been threatened with a nuclear attack by the rogue state – also says the missile launch pad started moving yesterday.”

The Korea Asia-Pacific peace committee, which oversees North Korea’s relations with the outside world spewed threats of vengeance after the most recent UN Security Council vote.

(…) The committee said the US should be “beaten to death like a rabid dog” for the “heinous sanctions resolution”.

“Let’s reduce the US mainland into ashes and darkness. Let’s vent our spite with mobilization of all retaliation means which have been prepared till now,”

And of neighbor Japan, the committee threatened

The four islands of the [Japanese] archipelago should be sunken into the sea by the nuclear bomb of Juche[self-reliance]. (…) Japan is no longer needed to exist near us,”

It is obvious the recent tepid sanctions on North Korea has not diminished Kim Jung Un’s march toward war. Thanks to the Democratic Parties nonsense charges of Russian collusion, there is really nothing we can do to negotiate their cooperation without the administration looking like they favor the Putin regime.  President Trump needs to double-down his pressure on China which is North Korea’s major trading partner.

Either way, America is lucky that Donald Trump is the President, rather than Barack Obama who would simply defer to the crazy North Korean despot.