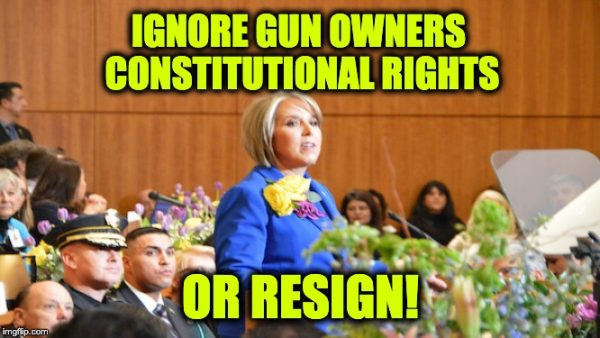 New Mexico Governor Michelle Lujan Grisham signed the state’s Red Flag law after it passed the House and Senate in New Mexico by slim margins (House vote 39-31, Senate vote 22-20).  After she signed the bill the NM Governor told the twenty-nine sheriffs who opposed the red flag law to resign.

“They cannot not enforce. And if they really intend to do that, they should resign as a law enforcement officer and leader in that community… The Legislature had the strength to pass this measure because we all recognize: Enough is enough. This law is sensible and balanced. It is a good public safety measure. If it saves even one life, and it will, we will have done good work here.” NM Gov Grisham

Cannot not? Yep, she not only advised 29 sheriffs to resign but also used a double negative.

The red flag law is opposed by twenty-nine out of the thirty-three county sheriffs in New Mexico. The twenty-nine signed a public statement saying the new laws would not be effective.

The NM Red Flag law allows police to petition the court for an “Extreme Risk Protection Order.” But that petition is based on sworn affidavits from “school administrators, employers, or relatives”   The court can remove firearms from persons deemed a threat to themselves or others without being accused of a crime, or charged with one.  Once the gun is seized a hearing is set for 10 days later and at the hearing a person can lose their gun rights for one year.

New Mexico Sheriffs’ Association President Tony Mace of Cibola County said the new law goes too far by potentially impounding guns before any crime is committed and that he and other sheriffs will assert their discretion over its enforcement.

Highlighting discontent in rural communities, elected commissioners declared Roosevelt County a “sanctuary” for Second Amendment guarantees on Tuesday, recognizing the right of the local sheriff “not to enforce any unconstitutional firearms law against any citizens.” The county of roughly 20,000 residents adjacent to Texas is the latest of at least a dozen New Mexico counties to embrace the sanctuary label.

Basically, Gomez said he is against taking firearms from the homes of law-abiding citizens. “I’m not for the bills,” Gomez stated. “Maybe there needs to be more thorough background checks, but as for taking guns away from people, no, sir! It’s our constitutional right to have them.”

The twenty-nine sheriffs who oppose the law are proving that they believe in the constitution and the law rather than making a political point. I pray that the legislators listen to the sheriffs who are on the front lines fighting crime.  If they don’t these legislators should all be voted out of office.

Obama: My Admin Didn’t Pursue Reparations Due to the ‘Politics of White Resistance’
February 24th, 2021 Flag And Cross