Gavin Newsom Is Blind To The Truth 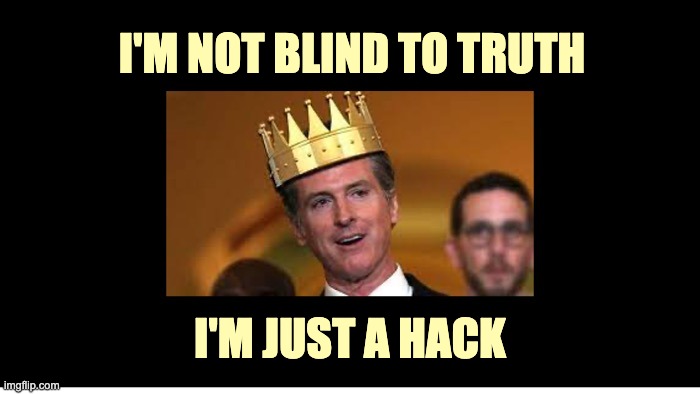 The attack on Paul Pelosi was a horrible incident. Both Democrats and Republicans have expressed outrage at the attack and prayed for a quick recovery. Needing someone to blame Gavin Newsom blamed the attack on Jesse Walters of Fox News and the entire network

“I’ve seen the dehumanization of Nancy Pelosi,” Newsom told CBS News’ chief Washington correspondent, Major Garrett, in an exclusive interview on Saturday. “I don’t think anyone’s been dehumanized like she has consistently. Now I watched this one guy, Jesse Watters or something on Fox News. What he’s been saying about Paul Pelosi the last five, six months, mocking him consistently. Don’t tell me that’s not aiding and abetting all this. Of course, it is.”

“They’re sowing the seeds, creating a culture and a climate like this,” Newsom said. “I mean, look online. Look at the sewage that is online that they amplify on these networks and in social media to dehumanize people like Nancy Pelosi and other political leaders.”

Newsom is blind to the truth. While he is exploiting the Pelosi attack as an excuse to slander and dehumanize Jesse Walters and Fox news, he ignores that many in his party are slandering one group and it’s having a huge effect on that population.

2021 Set a record in anti-semitic incidents: “There were 2,717 incidents last year, representing an increase of 34% over 2020 and the highest on record since the New York-based Jewish civil rights group started tracking such cases in 1979.” Using Newsom’s logic, these comments caused an increase in anti-Semitic incidents:

Rep. Mark Pocan (D-WI)  blamed Israel for Hamas’ acts of terror, claiming that just because Hamas is attacking Israel “doesn’t make it both sides issue.” In the past, Pocan had reserved official Capitol Hill space to host a forum supporting the anti-Semitic BDS movement.

Rep. Chuy Garcia (D-IL) claimed that Israel “provoked” the Hamas rocket attacks. He may be right because the Hamas charter calls for killing Jews, and all of the living Israeli Jews were still doing the provocative act or breathing.

Rep. Ayanna Pressley (D-MA) said that the Hamas bombing was a consequence of years of military occupation. Maybe someone stole her newspaper in Aug. 2005 when Israel pulled out of Gaza.

Rep. Ilhan Omar (D-MN)  said that Israel uses “the guise of self-defense” when defending itself from Hamas’ rocket attacks. This is the woman whose Democratic colleagues refused to condemn when she made a series of anti-Semitic comments in March 2019.

Rep. Alexandria Ocasio-Cortez (D-NY), who once claimed she had a Jewish background (thank God, not true), smeared Israel with the false charge of an Apartheid State.  Not only a lie, but Arabs have more rights in Israel than they would have in Gaza or any of the Arab States.

Rep. Rashida Tlaib (D-MI) advocated for anti-Semitic Boycott, Divestment, and Sanctions (BDS). At the same time, Israel was being bombed and  claimed that Israel was ‘promoting racism and dehumanization’ under an ‘apartheid system.’

Sen. Bernie Sanders (I-VT), a socialist who conferences with the Dems, has run for their Presidential nomination twice and is a Jew-hating-Jew tweeted out on Sunday, “We must also take a hard look at nearly $4 billion a year in military aid to Israel. It is illegal to support human rights violations. He’s also supported Rep. Omar’s Antisemitism.

Rep. Nancy Pelosi (D-CA) drew a moral equivalence between the attacking terrorist Hamas and Israel, defending herself with this statement, “Now, after more than a week of hostilities, it has become even more apparent that a ceasefire is necessary. There must be a serious effort on the part of both parties to end the violence and respect the rights of both the Israeli and Palestinian people.

Rep. Marie Newman (D-IL) Signed a letter calling on the Biden administration to condemn Israel’s illegitimate use of force in Jerusalem.

Other Democrats, such as Sen. Elizabeth Warren (D-MA), slammed Israel for the possible removal of Arab families from Sheikh Jarrah, even though it is a civil legal action by a landlord trying to remove squatters from his land. The lawsuit has been going through the Israeli courts for years and will be heard by the Israeli supreme court and has absolutely nothing to do with the Israeli government.

Sen. Kirsten Gillibrand (D-NY) wrote a piece supporting “four extraordinary women–Tamika Mallory, Bob Bland, Carmen Perez, and Linda Sarsour.”All four are anti-Israel and anti-Semitic supporters of Louis Farrakhan. Gillibrand trashed Bibi Netanyahu based on a meeting she had with Netanyahu in 2016 as part of a Senate delegation to Israel. She removed the context of Netanyahu’s statement to condemn him.

So which is it, Gov? Are you blind to the truth or do you just care about exploiting a tragedy to trash your political opponents?