Were The News Orgs Out To Destroy Nick Sandmann The Way They Did Mike Adams? 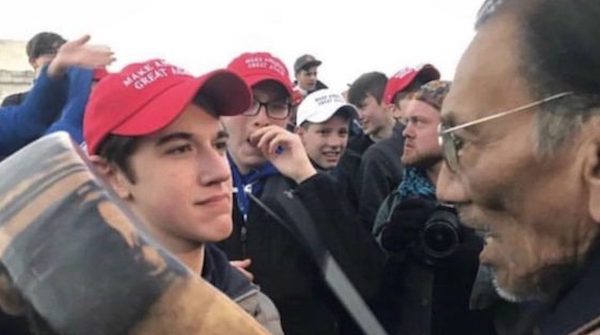 Some folks blow-off ‘cancel culture’ as merely an internet squabble. It is, in fact, much more than that. It isn’t merely a tool to silence someone on social media, it is a tool being used to utterly cut someone off from society for the crime of wrong-think.

It is a virulent Soviet-style compulsion to conform to the leftist standards of the day (yesterday’s rules are no longer good enough) or pay the price.

The consequence is far more far-reaching than an internet mob piling onto your social media platforms.

There is Doxxing, where your private and personal details are leaked.

There is character assassination. Unlike judgment by the courts, where innocence is presumed, and guilt must be proven, internet mobs work on a very different principle. One that is neatly encapsulated in an old reality TV slogan ‘the Tribe has spoken.’

There is no appeal, no rules of evidence, no jury of your peers, no fair trial. You are denounced in public with whichever career-destroying labels they might see fit to hit you with, and tattoo you with them in the full view of the public.

No appeal is offered. No apology is adequate.

We described what happened with Mike Adams, how his criticism of despotic overreach trampling the rights of a free citizen mirrored the way OTHER wealthy men in history trampled the rights of men unjustly called slaves. A convenient crowd was whipped up (orchestrated, almost certainly) Dr. Adams was forced out of a job he loved, and awarded a settlement.

Less than a month later, Adams lay dead in his home.

Were they trying to leverage the same soul-crushing tactic on a teenage boy, barely old enough to drive, for the wrong-think of wearing that iconic red hat so loathed by the Left?

One observer, John Zmirak, thinks so.

Nick Sandmann just turned 18 years old. And he’s settling a $250 million lawsuit with major media outlets that libeled him. Let’s send him our congratulations and prayers.

I was prepping Robert Oscar Lopez’s powerful piece on Mike Adams for publication when I realized something chilling. Reading how the left hounded that talented writer to suicide (if indeed he wasn’t murdered) I heard in my head the media headline that never ran. Thanks be to God.

“Racist Ringleader, Nicholas Sandmann, Dead at 17.”
That’s what the media mob wanted. They as good as admitted it. When powerful reporters call a young man’s face “the most punchable in America,” that’s what they mean. When columnists and activists propose “doxing” him, contacting every college he ever applies to, or job he tries to get, that’s what they mean.

When Sandmann’s own Catholic bishop threw him to the wolves, when his school suspended him, when “conservative” columnists at National Review and other venues denounced him as “bigoted,” they were writing him off for life. They were branding him on his face with the most destructive charge available in America. The charge that’s now burning cities and getting Trump supporters murdered.

He goes on to enumerate some of the lives left in tatters or ended entirely after similar leftist treatment.

One stands out, “Bernell Trammell, a black Trump supporter, murdered this weekend in Milwaukee.” His death is being investigated for potential political motivations.

Which brings us to the pint Zmirak was driving toward.

When mayors turn their cities over to violent mobs, and only keep the police around to disarm honest citizens, this is what happens to those on the wrong side of the mob. Expect more such murders soon.

If Nick Sandmann Had Smiled in 2020

I’m relieved and delighted by the miracle that spared Nick Sandmann their fate. Why did the left’s bullets miss him? A gang of rabid anti-white radicals — not Black Lives Matter, but the similarly unhinged Black Hebrew Israelites (BHI) — had been taunting, cursing and threatening the Covington boys for more than an hour. The “Indian tribal elder” apparently joined in on the BHI’s side. None of that would excuse Sandmann for smiling while white, of course. But through some divine intervention, one of the BHI thugs videotaped the whole encounter. He posted it online.

That raw footage showed how crudely CNN and others had doctored their accounts of the confrontation. No, the white teens hadn’t “crowded” or “mobbed” or surrounded the “tribal elder.” He’d marched up into their faces, banging a war drum. And they’d simply stood their ground.

That was enough to flip the narrative surrounding Mr. Sandmann. Would it be enough today? I really don’t think so. Today, the media would render the white pro-lifers’ simple refusal to kow-tow or take a knee as “provocative white privilege.” In 2020, the black cult members would feel emboldened to simply attack Sandmann and his friends. The police, badgered and threatened, would be far, far away, standing down at the mayor’s orders.

And even if the BHI had beaten the Covington boys to death, no TV network would air it. Not even Fox.

This isn’t about Adams, or Trammell, or even Sandmann.

The point he is really making is that these attacks are becoming bolder, more brazen, more destructive, more violent, and more personal.

Anyone and everyone who stands opposed to the political aims of the militant left is potentially a target, even the less militant left.

They are using coercive means to intimidate and dominate, to force an agenda down our collective throats. And if we do not accept it, like good little Comrades, we must pay the price.

Are we willing to take a stand, like Sandmann did?

Even if it will cost us something?