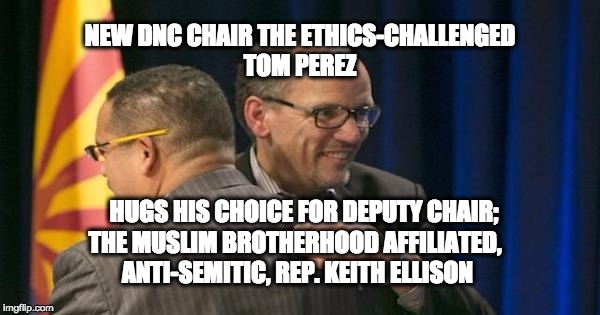 Well the results are in, and the DNC has chosen its new leader.  In the proxy battle between the Sander-nistas and the Clinton-ites, Tom Perez the choice of the Clinton-ites won the race for to be the next Chairman of The Democratic National Committee with 235 votes only 17 more than the necessary 218 majority.

The Sander-nistas choice was the anti-Semitic, anti-Israel Congressman Keith Ellison, who has strong ties to Muslim Brotherhood affiliated organizations, had the endorsement of Bernie Sanders, Harry Reid and Elizabeth Warren, and Senate Minority Leader Chuck Schumer among others. Schumer’s endorsement was very strange. The NY Senator had the guts to stand up to his party’s president Barack Obama’s anti-Israel hatred, but somehow lost his cojones when it was time to stand up to the anti-Israel, anti-Semitic, terrorist appeasing extreme-liberal wing of the Democratic Party who pushed Ellison.

Anyone who believes the Democrats dodged a bullet by choosing Perez over Ellison is wrong.  Perez was not only the choice of the Clinton wing of the party, but he has many of he same issues as Hillary Clinton, including  email, ethics, telling the truth, and a belief that only Caucasians can commit race crimes.

This past December The Hill  exposed that as reported that Assistant Attorney General for Civil Rights  Perez used a private email account violating the Federal Records Act, and then tried to cover it up.

“The House Oversight and Judiciary Committees, along with the minority staff on the Senate Judiciary Committee, launched an investigation. They found Mr. Perez had tried to cover up the quid pro quo and ‘likely violated both the spirit and letter of the Federal Records Act’ by using his personal email accounts to conduct official government business. The House subpoenaed his emails.”

All told Perez violated the Federal Records Act 34 times while working for the Department of Justice:

Perez even had a Clintonesque excuse when questioned by Congress about his unlawful email practices. Perez claimed that he did not have “any recollection” of sending 1200 emails from his personal account:

“In a March 22 interview with congressional investigators, Perez was asked whether he had ever conducted official business from his personal email account. Perez said: ‘I don’t have any recollection of having communicated via personal email on this matter.’”

But this wasn’t Perez’s first case being dishonest to congress. He has this nasty habit of telling people his grandfather was thrown out of the Dominican Republic because he spoke out about the Dominican Leader’s massacre of Haitians, an impossibility as reported in the Wall Street Journal.

In addition, Mr. Perez testified in 2013 at his Senate confirmation hearing that his grandfather ‘was declared ‘non grata’ for speaking out against the dictator following the brutal massacre of thousands of Haitians’ in 1937. But in fact, Mr. Brache had left the Dominican Republic about two years earlier, according to State Department memos and media accounts at the time.

The losing candidate represented the very-very-very, left-wing part of the Democratic party, but like his buddy Hillary, Perez is no moderate. In fact, the Baltimore Sun said he was one of the most liberal members of the very liberal Obama administration:

“Perez, a Buffalo native who attended Harvard Law School and now lives in Takoma Park, is among the most liberal members of President Barack Obama’s administration.  Republican senators who had accused him of being overly political at the Justice Department opposed his confirmation as labor secretary. Business groups are wary of the scope of new rules and regulations he has ushered in. ‘He has pushed an ideological agenda that’s hurt workers and employers,’ said Heather Greenaway of the conservative Workforce Fairness Institute in Washington. ‘It’s almost like he was the fox guarding the henhouse, and now he could be in charge of the whole farm.'”

At the beginning of the Obama Administration, the Justice Department dropped a voter intimidation case against the New Black Panthers that had already been won because they felt that Caucasians could not be victims of voter intimidation, and that African-Americans couldn’t be the oppressors. Tom Perez was involved with, and lied to congress about the racist decision.

According to Christian Adams resigned from the DOJ Voting Rights Division and went public with the story of the “hows and whys” the Black Panther case was dropped. Adams explained the decision to drop the case was based on race and Perez lied about it in his congressional testimony.

Based on my firsthand experiences, I believe the dismissal of the Black Panther case was motivated by a lawless hostility toward equal enforcement of the law. Others still within the department share my assessment. The department abetted wrongdoers and abandoned law-abiding citizens victimized by the New Black Panthers. The dismissal raises serious questions about the department’s enforcement neutrality in upcoming midterm elections and the subsequent 2012 presidential election,

Adams said the New Black Panther case was most open and shut case of voter intimidation that he had seen during his years of service at the DOJ Voting Rights Division. They had sworn testimony that the members of the Black Panther party blocked white voters from entering the polling place. But Adams reported that wasn’t the testimony the DOJ gave before Congress:

The assistant attorney general for civil rights, Tom Perez, has testified repeatedly that the “facts and law” did not support this case. That claim is false. If the actions in Philadelphia do not constitute voter intimidation, it is hard to imagine what would, short of an actual outbreak of violence at the polls….

Mr. Perez also inaccurately testified to the House Judiciary Committee that federal “Rule 11” required the dismissal of the lawsuit. Lawyers know that Rule 11 is an ethical obligation to bring only meritorious claims, and such a charge by Mr. Perez effectively challenges the ethics and professionalism of the five attorneys who commenced the case. Yet the attorneys who brought the case were voting rights experts and would never pursue a frivolous matter. Their experience in election law far surpassed the experience of the officials who ordered the dismissal.

Adams places the blame for the dismissal of the case on racism.

..the dismissal is part of a creeping lawlessness infusing our government institutions. Citizens would be shocked to learn about the open and pervasive hostility within the Justice Department to bringing civil rights cases against non white defendants on behalf of white victims. Equal enforcement of justice is not a priority of this administration. Open contempt is voiced for these types of cases.

Some of my co-workers argued that the law should not be used against black wrongdoers because of the long history of slavery and segregation. Less charitable individuals called it “payback time.” Incredibly, after the case was dismissed, instructions were given that no more cases against racial minorities like the Black Panther case would be brought by the Voting Section.

For their leader the Democrats elected a man who has problems with the truth, problems with email, has broken the federal records act, has lied to congress and the American people and doesn’t believe in equal justice under the law for all citizens.  Kind of sounds like the last Democratic Party candidate for president.

And the best part is that Chuck Schumer and Elizabeth Warren will still be happy, because Perez picked the radical progressive, anti-Semitic, anti-Israel, Muslim Brotherhood-affiliated Keith Ellison for his deputy chair.

The Democrats who have lost touch with the average Americans, have just taken one giant leap further away from the middle-class, and rust belt voters who gave Donald Trump the presidency in November.