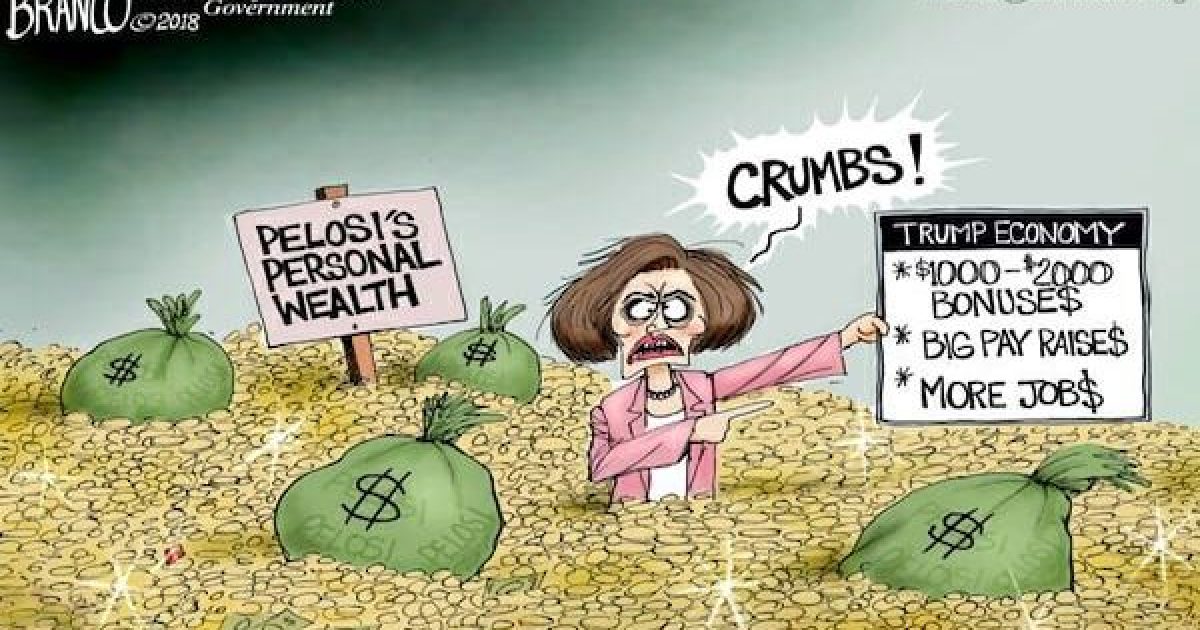 House Minority Leader, Nancy Pelosi (D-CA) has just revealed her party’s plans for the nation – if they’re elected back into power in 2018.

The plan is an interesting one, especially for a party that says they want to win an election.

If the American people hand the reins of power back to the Democrats, Pelosi is promising to… undo the GOP Tax Cuts and raise taxes on 90% of Americans… again.

Speaking to her constituents in Culver City, California, alongside Hollywood Congressman Ted Lieu, Pelosi pledged to discard the popular bill, which has prompted several major American companies to boost wages, share profits, and in some cases move their production operations back from overseas, because Republicans were so secretive in enacting the bill.

Pelosi pretends that her “problem” with the GOP tax bill is that it was done in “secret” and that the Democrats didn’t have enough time to really get to understand the bill (this is rich, coming from the same person who led Obamacare through secretly, and forced dozens of bills through Congress while only allowing a few hours for GOP representatives to read what was being voted on). The reality is that the Democrat Party never wants to cut taxes for anyone, and they most certainly don’t want Americans realizing that the economy does better when taxes get cut.

In fact, most of the Democrat tax reform plans called for MORE taxation, not less.

While the GOP plans to run on the success of the recently-passed tax cuts and the obvious boon the cuts have already been to the national mood and economy, the Democrats are going… a different way.

The Democrats just released their $1 TRILLION TAX HIKE plan that they hope America will support in November.

Minority Leader Chuck Schumer said his party’s proposal would be funded by lifting the corporate tax rate from 21 percent to 25 percent and by raising the upper tax bracket back to 39.6 percent, reinstating the AMT and getting rid of the carried-interest tax loophole.

“We want to roll back the Republicans’ tax giveaways to corporations and the wealthy and invest that money instead in jobs and infrastructure,” Schumer, D-N.Y., said.

The tax cuts, passed last year by the GOP-led Congress, were implemented in February. It lowered the top tax rate for individual filers from 39.6 percent to 37 percent. The corporate tax rate was slashed from 35 percent to 21 percent.

If the Democrat plan for winning back the House really is raising taxes, they’ll likely have a difficult time reclaiming the majority.