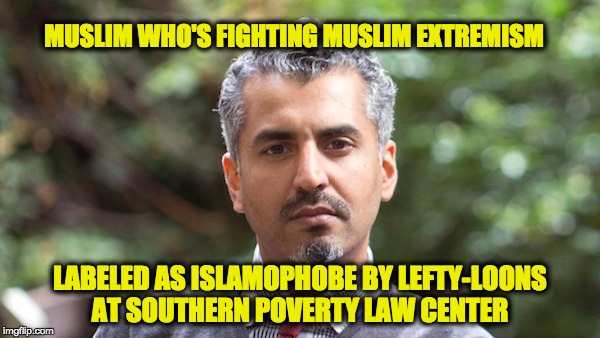 Okay, it is no secret that the Southern Poverty Law Center (SPLC) is an over-the-line, liberal. loony-toons group dedicated to fight anybody or anything that identifies as conservative—but this seems extreme even for them. Maajid Nawaz is a former Muslim extremist who now spends his time fighting against the spread of radical Islam in the West. For his efforts he has been threatened with death by Islamists, and now he’s been slandered as an “Islamophobe” and a hate group by the SPLC . How a Muslim man can be considered to be Islamophobic is beyond me, but such is the logic of the left.

Nawaz appeared on HBO’s Real Time with Bill Maher to discuss his lawsuit against the Southern Poverty Law Center (SPLC), which recently added his anti-radical group to their “hate group” list. As Nawaz explained “well meaning white liberals” often make the fight against radical Islam harder by silencing the people who are defending liberal values.

Saying he was “sick and tired” of “well-meaning liberals,” Nawaz announced his plans to sue the non-profit hate-group monitor and finance the legal action via crowd-funding.

“I’d like to be part of that crowd,” Maher said, an offer Nawaz accepted with a handshake.

“It’s funny,” Maher said, “you’re fighting extremists but they call you an extremist.”

Nawaz told Maher that being included on the SPLC’s list of anti-Muslim extremists endangers his life. “We know what happens when you list heretics,” Nawaz said. “They end up dead

Now here’s the really sick part. The SPLC is not calling Nawaz Islamophobic because he spews anti-Muslim rhetoric, or prints anti-Muslim illustrations. No, they are calling supposedly outing him because

“… major elements of his story have been disputed by former friends, members of his family, fellow jihadists and journalists, and the evidence suggests that Nawaz is far more interested in self-promotion and money than in any particular ideological dispute.”

Even if the above is true, that he is more interested in self-promotion and money, that doesn’t make him an Islamophobe, it makes him a capitalist.

But one can’t really expect anything different from the Southern Poverty Law Center. The SPLC hasn’t been well-intentioned in a long time. The SPLC started as a civil rights organization with good intentions, fighting racists such as the KKK. However in recent years it has gone crazy, leveling accusations of racism unjustly, branding as “bigoted” many groups and individuals whose only crime lies in their refusal to embrace the SPLC’s left-wing agenda, including Tea Partiers, The Federation for American Immigration Reform, known as FAIR, and of course they spent most of the recent election cycle attacking the future president Trump as racist. Heck they even declared the term “Drain The Swamp” as racist which is ridiculous charge unless of course comic character “Swamp Thing” really exists.

And why is Nawaz labeled as an “anti-Muslim extremist” by the SPLC? From the Washington Examiner:

In its “Field Guide to Anti-Muslim Extremists” the SPLC says, “the evidence suggests that Nawaz is far more interested in self-promotion and money than in any particular ideological dispute. He told several different versions of his story, emphasizing that he was deradicalized while in Egypt — even though he in fact continued his Islamist agitation for months after returning.” SPLC’s principle argument against Nawaz appears to be that his organization supports broad intelligence gathering measures, including monitoring people not accused of crimes, if doing so can prevent future terrorist attacks.

The guide points to comments by Nawaz such as “the ideology of non-violent Islamists is broadly the same as that of violent Islamists; they disagree only on tactics” and “in fact, academic institutions in Britain have been infiltrated for years by dangerous theocratic fantasists. I should know: I was one of them” as proof of his extremism.

Also cited as proof in the guide was that in 2014 “Nawaz tweeted out a cartoon of Jesus and Muhammad — despite the fact that many Muslims see it as blasphemous to draw Muhammad. He said that he wanted ‘to carve out a space to be heard without constantly fearing the blasphemy charge.’”

My Mother of blessed memory taught me the only way to stop a bully from bullying is to stand up to them, look them in the eye, and push back…first verbally, and then if necessary physically. With his lawsuit Maajid Nawaz is standing up to the conservative-hatting bully called the Southern Poverty Law Center

Maajid Nawaz’s interview with Bill Maher is well worth your time and should be viewed below:

Note: Parts of this post was originally seen at Constitution.com