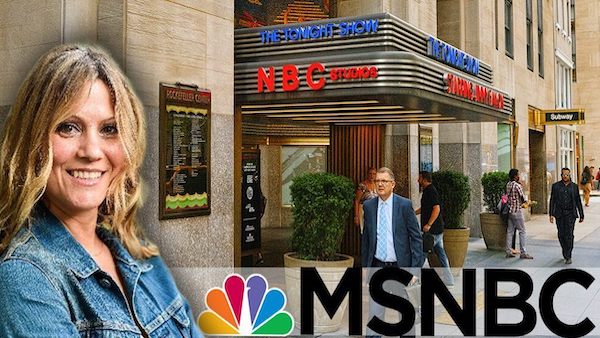 An MSNBC insider stopped drinking the Kool-Aid and became a whistleblower, telling the truth about the network to the world. The whistleblower, Producer Ariana Pekary had an epiphany, quit the network near the end of July.  On Monday, she wrote a scathing article explaining her former network, allows no diversity of thought, selects content based on ratings instead of news value, believes its viewers aren’t smart enough to understand facts, and trashes Trump instead of telling the full story.

She wrote on her personal web site:

“July 24th was my last day at MSNBC. I don’t know what I’m going to do next exactly but I simply couldn’t stay there anymore. My colleagues are very smart people with good intentions. The problem is the job itself. It forces skilled journalists to make bad decisions on a daily basis.”

She went to explain why she wanted to quit MSNBC:

It’s possible that I’m more sensitive to the editorial process due to my background in public radio, where no decision I ever witnessed was predicated on how a topic or guest would “rate.” The longer I was at MSNBC, the more I saw such choices — it’s practically baked in to the editorial process – and those decisions affect news content every day. Likewise, it’s taboo to discuss how the ratings scheme distorts content, or it’s simply taken for granted, because everyone in the commercial broadcast news industry is doing the exact same thing.

Pekary wrote that she talked to a TV veteran who told her, “We are a cancer, and there is no cure,” a successful and insightful TV veteran said to me. “But if you could find a cure, it would change the world.” The former MSNBC producer believes that the network is making things worse, “As it is, this cancer stokes national division, even in the middle of a civil rights crisis. The model blocks diversity of thought and content because the networks have incentive to amplify fringe voices and events, at the expense of others… all because it pumps up the ratings.”

A senior producer at the network told her, “Our viewers don’t really consider us the news. They come to us for comfort.” Perhaps that’s why according to  Ariana Pekary, MSNBC believes its viewers aren’t smart enough to understand the facts. “Context and factual data are often considered too cumbersome for the audience.” She adds that news stories are selected based on ratings “basing today’s content on whatever rated well yesterday or look to see what’s trending online today.”

Ms. Pekary admits that sometimes the network picks a news story based on its news value instead of its potential ratings,” but that is the exception,”

The former producer aslo admits she is frustrated that Instead of covering the full story of the COVID pandemic, at MSNBC, the only story is that Trump is doing a lousy job:

The primary focus quickly became what Donald Trump was doing (poorly) to address the crisis, rather than the science itself. As new details have become available about antibodies, a vaccine, or how COVID actually spreads, producers still want to focus on the politics. Important facts or studies get buried.

No diversity of thought, ratings before news value, and trashing Trump instead of telling the full story, it is no surprise that is what MSNBC is about. The only surprise is that Ariana Pekary quit her job and became a whistleblower–Bravo!