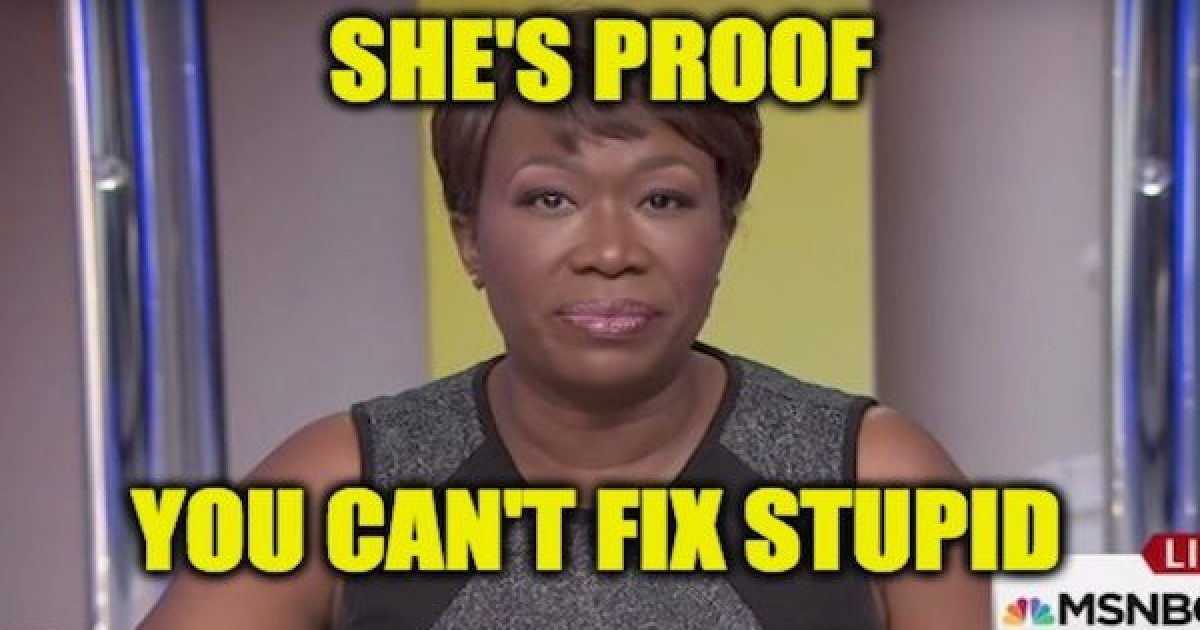 MSNBC’s Joy Reid is constantly spouting ridiculousness at and about President Trump, the GOP, and conservatives in general. She holds herself up as a paragon of the left and someone who is ideologically pure in her progressive value system…

Just a few months ago she was found to have tweeted some insensitive things about former Republican Florida Governor Charlie Crist, who is now a Democrat, but still says he is not gay.

After apologizing for those old tweets, Reid thought that the issue was done with until she remembered that her old website carried similarly anti-gay rhetoric. She and her assistants pulled the site down, but soon realized that the Internet is forever, and asked the folks at the “Wayback Machine,” an internet archive, to scrub their site of her old content. Thankfully, the “Wayback Machine” refused, and months later the same people who had found Reid’s original anti-gay tweets, found her anti-gay blog posts.

Last night, the news outlet that reports on TV news media, Mediaite, published an extensive story on these newly found articles that appear under Reid’s byline.But unlike the posts for which Reid apologized in December — which she said were intended to mock the hypocrisy of GOP officials who are simultaneously closeted gays, but also anti-gay in their politics — these newly discovered articles have nothing to do with GOP hypocrisy. They are just hateful, bigoted, and homophobic in their own right.Some of the lowlights, as Mediaite itemized, include:

There are many other similarly horrific and bigoted passages that appear under Reid’s byline on her blog — far beyond the ones she previously acknowledged and apologized for.

Reid now says that the Wayback Machine has been hacked and that she didn’t actually write any of the incriminating pieces on the site.

The Wayback Machine responded to Reid’s claims that they were hacked by conducting an internal review, and discovering… there was no evidence that they’d been hacked.

Some recent press stories (1, 2) have discussed archived blog posts of a prominent journalist, Joy Ann Reid, in the Wayback Machine and her claims that some of these posts were “manipulated” by an “unknown, external party”.

This past December, Reid’s lawyers contacted us, asking to have archives of the blog (blog.reidreport.com) taken down, stating that “fraudulent” posts were “inserted into legitimate content” in our archives of the blog. Her attorneys stated that they didn’t know if the alleged insertion happened on the original site or with our archives (the point at which the manipulation is to have occurred, according to Reid, is still unclear to us).

When we reviewed the archives, we found nothing to indicate tampering or hacking of the Wayback Machine versions. At least some of the examples of allegedly fraudulent posts provided to us had been archived at different dates and by different entities.

We let Reid’s lawyers know that the information provided was not sufficient for us to verify claims of manipulation. Consequently, and due to Reid’s being a journalist (a very high-profile one, at that) and the journalistic nature of the blog archives, we declined to take down the archives. We were clear that we would welcome and consider any further information that they could provide us to support their claims.

At some point after our correspondence, a robots.txt exclusion request specific to the Wayback Machine was placed on the live blog. That request was automatically recognized and processed by the Wayback Machine and the blog archives were excluded, unbeknownst to us (the process is fully automated). The robots.txt exclusion from the web archive remains automatically in effect due to the presence of the request on the live blog. Also, the blog URL which previously pointed to an msnbc.com page now points to a generic parked page.

In response to the new information, an LGBTQ group has decided to rescind an award that they had planned to honor Reid with.

Said PFLAG National president Jean Hodges, “When we extended our invitation to Ms. Reid to honor her at our 45th anniversary celebration, we did so knowing about the blog posts from the late 2000s regarding Charlie Crist. We appreciated how she stepped up, took ownership, apologized for them, and did better—this is the behavior and approach we ask of any ally. However, in light of new information, and the ongoing investigation of that information, we must at this time rescind our award to Ms. Reid.”

Interestingly, some Internet sleuths have decided to do the research to figure out if Reid was right, and she had been hacked. What they found will not make Reid happy. While some of the content may indeed by fabricated, much of the anti-gay rhetoric that appears on her website… is original, and can be attributed to Joy Reid.

You’d expect this kind of commentary to be setting the leftwing Internet on fire. You’d expect the mainstream media to be collapsing on Joy Reid like a ton of bricks. You’d expect her world to be falling apart and MSNBC rushing to announce that they were cutting ties with their embattled host. You’d expect all these things, but you’d be wrong. Instead, the left has remained mostly silent about Reid’s peccadillos, strongly indicating that they’d be giving her a pass for her ‘crimes.’

So why aren’t the mainstream sites covering this scandal? Glenn Greenwald at the Intercept explains:

By very stark and notable contrast, liberal news outlets and liberal journalists have steadfastly ignored the story almost completely (the only exception I’ve seen is a tweet from the editor of one large liberal blog who suggested that Vladimir Putin was behind the hacking in order to ruin Reid’s reputation).

The reason liberal news sites are ignoring the story is as self-evident as it is troubling: Because Reid’s ideology is in accordance with theirs, and they therefore don’t care if she’s lying or telling the truth when denying authorship of these bigoted articles, nor do they care about the anti-LGBT bigotry itself. Those are concepts to be exploited opportunistically for partisan gain; they are devoid of any actual conviction. Their silence on this latest, incredibly strange episode involving one of their iconic media personalities demonstrates that rather compellingly.

Just as right-wing sites would be steadfastly ignoring this story if a Fox News host — in response to embarrassing articles found on their website — had claimed they were the work of bizarrely innovative and enterprising hackers, while liberal sites would be flooding the internet with detailed and indignant coverage of those claims, liberal sites are going to just pretend the Joy Reid story does not exist until it disappears. Reid knows this — she works every day with the people who run these liberal outlets and she knows exactly what their mentality is — and that’s why she feels no obligation even to address it beyond the statement she provided to Mediaite.

Reid is assuming that liberal media outlets will prioritize their ideological and partisan affinity for her over their proclaimed, profound concern for LGBT bigotry, hacking, and journalistic integrity. And on that question, at least, Reid is almost certainly right. Perhaps this is one of the reasons why trust in media institutions has collapsed to the point where people are as willing to believe what they read from fake sites as they are from established ones?

The left will likely continue to ignore the scandal until it passes, and you know who else will probably ignore it? The LGBT community, because while they may not like what she said, they’d rather have her attacking conservatives than sitting on the sideline. In their minds, Reid may be evil but she’s useful and so they’ll protect her.

This is the definition of hypocrisy and it’s what the left does.