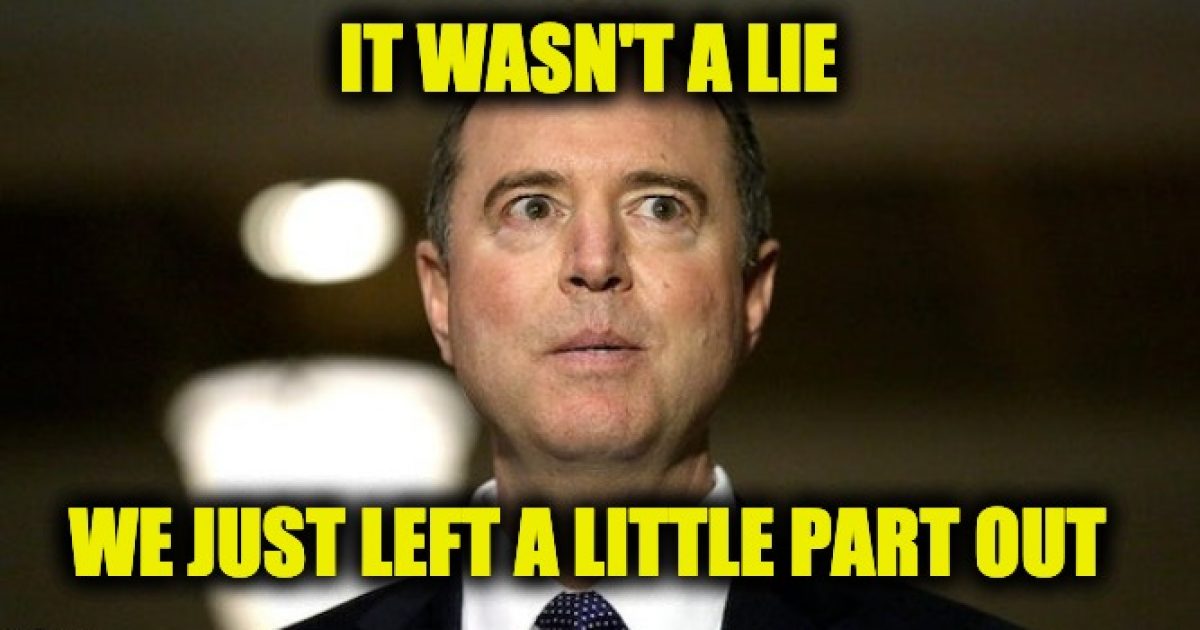 The testimony of Tim Morrison at the House impeachment hearings was widely viewed as supportive of Trump. But it was even more pro-Trump than advertised,  Adam Schiff removed the pro-Trump parts of the Morrison transcript. Democrats distorted it to push their agenda with the left-wing media. Republicans are furious.

“First, the committee withheld the transcript since October 31, only releasing it after the first public hearings began last week. Morrison’s testimony was rumored to be very good for President Donald Trump’s defense — Rep. Mark Meadows (R-NC) had described Democrats in the room during the closed-door hearing as “sucking lemons” — and Republicans would have made good use of it, had they had the transcript available. But it was not provided.

In the interim, Democrats had sole possession of the document. Schiff does not allow copies of the transcripts to be released to Republicans, either in paper or electronic form. If they want to read transcripts, they must do so one by one, in the presence of a Democrat committee staffer. Not only is that rule humiliating, but it also allows Democrats to control the flow of information and to prepare their public arguments with no fear of timely Republican rebuttal.”

What did Schiff leave out: the fact that Morrison said he found NO inappropriate actions in the phone call. None. Zip. But Schiff conveniently left those exchanges out of the Morrison transcript.

“I was not concerned that anything illegal was discussed.” Tim Morrison

THE CHAIRMAN: “So you didn’t think that the President of the United States asking his counterpart to conduct an investigation into a potential opponent in the 2020 election might influence bipartisan support in Congress?

THE CHAIRMAN: That never occurred to you?

THE CHAIRMAN: Did you recognize during the — as you listened to the call that if Ukraine were to conduct these investigations, that it would inure to the President’s political interests?

In essence, they skewed the transcript for the benefit of left-wing media. Morrison also contradicted the Democrats’ star witness, Lt Col Vindman, but that part of the testimony was also left out.

Morrison and a Pence aide, Jennifer Williams (whose transcript was also distorted) are set to testify again on Tuesday.  And the circus continues.

This is the kind of distorted information Adam Schiff, the bloviating barrister of Burbank, has subjected America to ever since Donald Trump was elected President. Shifty Schiff’s latest move is another reminder not to believe anything that comes out of the intelligence committee, and their sycophants in the mainstream media.

As Attorney General William Barr said to the Federalist Society on Friday, “instead of viewing themselves as the “loyal opposition,” as opposing parties have done in the past, they essentially see themselves as engaged in a war to cripple, by any means necessary, a duly elected government.”

Adam Schiff is leading the charge to overturn the Trump Administration and the 2016 vote of the American people.