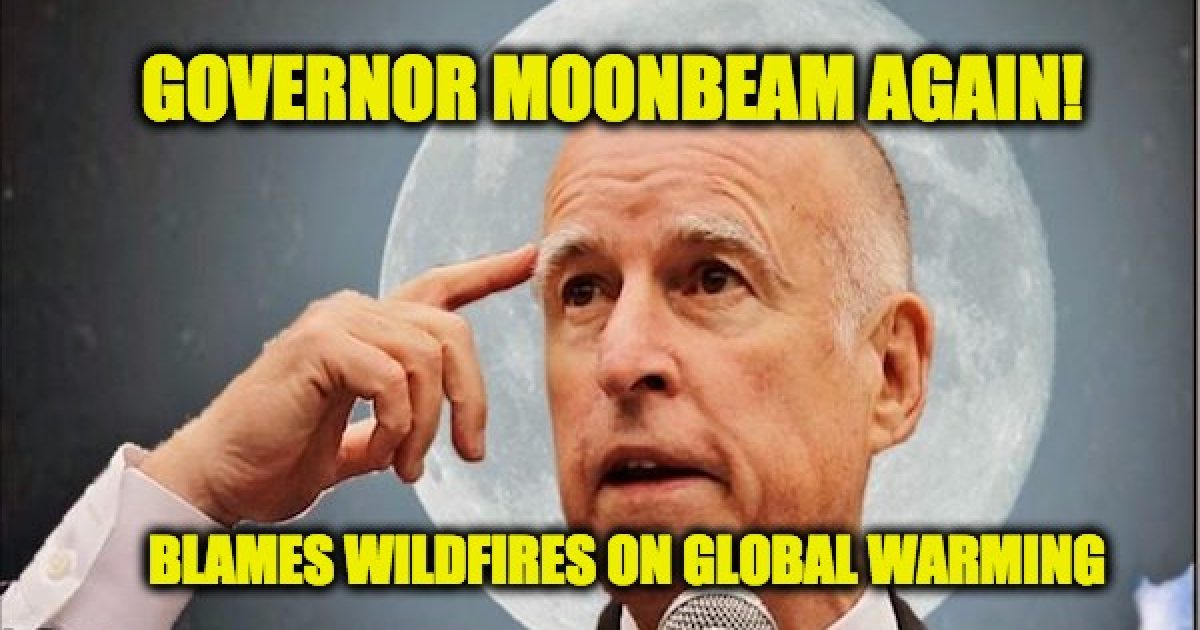 “This is kind of the new normal,” he said, adding that extreme fire activity will happen on a regular basis for decades.
“With climate change, some scientists are saying that Southern California is literally burning up,” he said. “So we have to have the resources to combat the fires and we also have to invest in managing the vegetation and forests … in a place that’s getting hotter.”

The governor’s claim was backed up by liberal media outlets such as the NY Times and Rolling Stone. The only problem with these claims is they are bogus.

Cliff Mass, a climate scientist at the University of Washington explained on his blog Sunday:

Let me demonstrate this to you, with facts, peer-reviewed papers, and the best science can tell us.

First, some facts everyone should agree on:

1.  That wildfires took advantage of an environment with sufficient dry fuels (e.g., grasses and shrubs) to support fires.
2.  The initiation of the wildfires were associated with the onset of strong offshore (northeasterly) winds that developed as high pressure built into the intermountain West.

The question, of course is whether these elements had anything to do with global warming.  As we will see, the answer is clearly no.  And we will also see that there is a slew of other elements (prior fire suppression, irresponsible expansion of homes, influx of invasive grasses) that have made the situation much worse.

Professor Mass explains that the reason the California Coast becomes dry is that the jet stream goes farther north during the warm season and because the Pacific is relatively cool the region doesn’t get many thunderstorms.

So grasses, shrubs, and other fuels will be dry by the end of summer and during fall, no matter what.    And even if the fuels weren’t dry, they would dry within hours of the initiation of strong, offshore winds–which accompany virtually every major fire event.

“Historical analysis of wildfires around the world shows that since 1950 their numbers have decreased globally by 15%,” wrote Dr.  Bjorn Lomborg of the Copenhagen Consensus Center and the Copenhagen Business School in the Wall Street Journal on January 23, 2013. Lomborg also pointed to a study published in Nature in November showing globally that “there has been little change in drought over the past 60 years.”

Taking a look at the trends through 2016 via the federal government’s National Interagency Coordination Center, there hasn’t been a spike in US wildfires, in fact, the five year average of 62,248 fires/year (the next to last bar on the right) is lower than the ten year average of 73,304 fires/year. An indication that the number of wildfires has been decreasing (sorry Governor Moonbeam).

In his blog post, Professor Mass gets to the real reason for wildfires in California, political malfeasance:

Those that are claiming the global warming is having an impact are doing so either out of ignorance or their wish to use coastal wildfires for their own purposes.  For politicians, claiming that the big wildfires are the result of global warming provides a convenient excuse not to address the real problems:

And to be extremely cynical, some politicians on the left find the fires as a convenient partisan tool.

And of course, the other reason Brown’s fear tactics are way off is the fact that the earth hasn’t warmed since Bill Clinton was chasing interns around the White House.