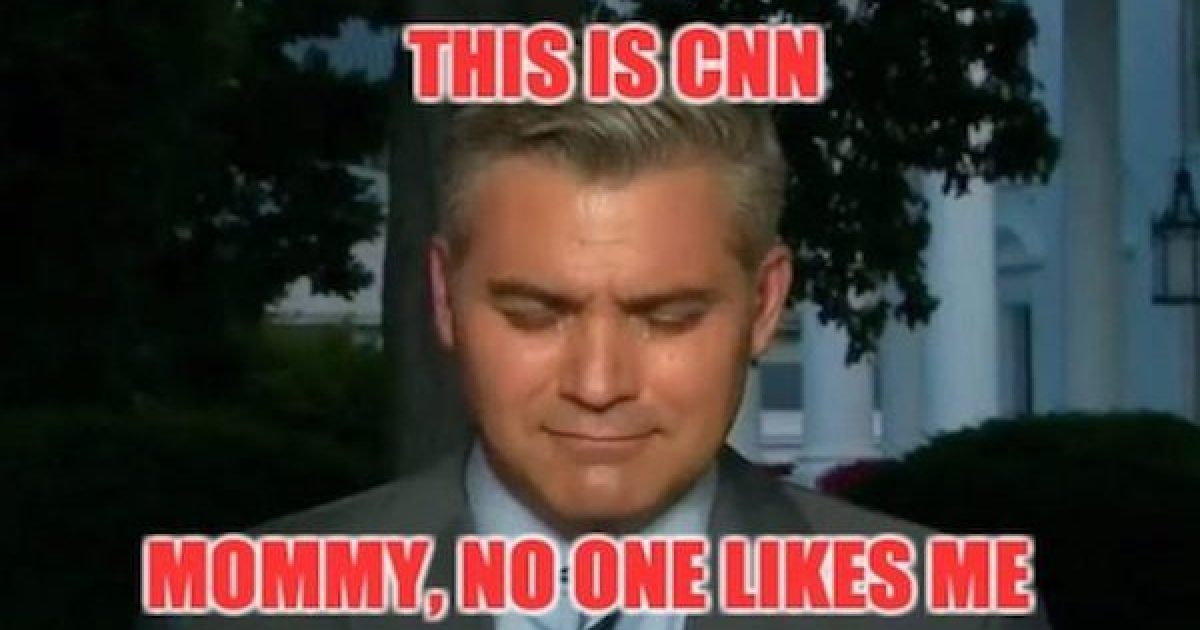 I wonder if Jim Acosta realizes that in his case it IS personal. Very few people in the administration likes or respects him. He is considered by conservative observers as the most unprofessional member of the White House press corps. And today he got received a smackdown from an administration figure he mistakenly thought was new, but had never drop kicked him before.

The CNN crybaby ‘s first question was about the NY Times story accusing Rod Rosenstein of trying to get cabinet members trying to invoke the 25th amendment trying to remove President Trump from office. Forgetting that Mike Pompeo started was Trump’s first CIA director, Acosta said to Ambassador Haley that she was the only person at the podium who had been with the administration since its inception, he wanted to know if she had at 25th administration discussion.

“I said yesterday on the Sunday shows that, literally, I have never once been in the White House where that conversation has happened,” Haley said. “I’m not aware of any Cabinet members that are even talking about that. It is completely and totally absurd. No one is questioning the president at all. If anything, we’re trying to keep up the pace with him, in the fact that he’s got a lot he wants to accomplish very quickly, and we’re going to continue to support him in the way that he does that.”

Acosta turned to Pompeo and asked about nuclear negotiations with North Korea and the prospects of a second summit between Trump and the only chubby guy in North Korea, Kim Jong Un, But before answering Pompeo demonstrated that he felt the same way about Acosta as just about everyone else outside CNN.

“Fact check: I’ve been with the administration since the beginning, too,” Mr. Pompeo said. “That’s relevant. But I’ll add — no discussion with me about the 25th Amendment anywhere, either — so you can now report that two senior leaders have said that your question was ludicrous.”

Acosta interrupted to apologize and asked why it was a ludicrous question if Rosenstein had, according to the Times, talked about the 25th Amendment behind the scenes.

I find the question ludicrous. I’ve been involved I’ve been at the center of this administration along with lots of other folks for from virtually day one I think it was actually day three or four I’ve never heard anyone talk about it whisper about it joke about it in any way I’ve been in a lot of meetings with a lot of senior officials from this government

Boom drop-kicked through the goal posts.

I am reminded of late July when Acosta was heckled doing a live report at President Trump’s rally in Tampa, Florida, CNN’s Jim Acosta had to deal with hecklers screaming CNN Sucks, Fake News, and Go Home. Acosta said:

“Wolf, just to give you a sense of what’s happening right now, you can hear there is a chorus of boos and other chants from this Trump crowd here in Tampa, Florida there, saying things like, ‘CNN sucks,’ ‘go home,’ and ‘fake news,’Wolf, obviously all of those things are false.We’re staying right here, we’re going to do our job and report on this rally for all of our viewers tonight,”

Actually, Jim, it’s not really CNN the people were yelling at, they were screaming at you.  And today when Mike Pompeo took your error as an excuse to drop kick you in the face, it was personal then also.