Migrants Clash With Mexican Police, Demanding ‘Right’ To Proceed To Our Southern Border 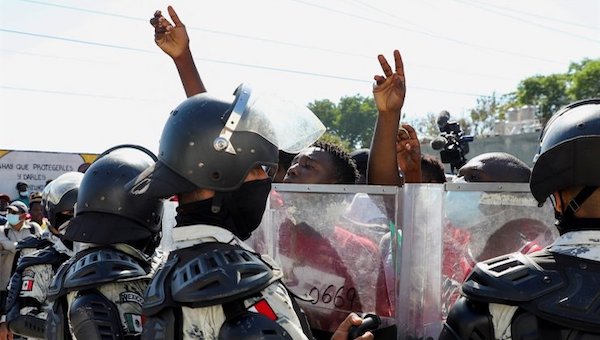 Quick, someone tell Kamala that she needs to reimagine her ‘root causes’ of immigration since the places they’re coming from keep changing. Mexican authorities have amplified their enforcement of immigration laws in the past few years, particularly as the migrant population seeking to cross the country has diversified.

As predicted, we’re seeing people from places OTHER than the Central American countries. Kamala has lectured us about finding their way into Central America with the intent of coming to America.

While migration from Central America has somewhat ebbed recently, more people from Haiti, Venezuela and from beyond the Americas, particularly Africa, have sought to cross Mexico seeking refuge in the United States.

But some of them have hit a snag, and they are pretty pissed off about it. After all, literally millions of people have already breezed right through Mexico to jump the American border. Why should they be any different?

According to the Mexican National Migration Institute (INM), around 30 Cuban nationals refused to stand in line outside the permits office, and were later joined by around 70 migrants that the INM identified as from African nations and Haiti.

The Mexican National Guard — a militarized police force — deployed to remove the protesters, and the protests turned violent, according to INM.

According to a report by Reuters, human rights activist Irineo Mujica said the migrants were frustrated after waiting for months for permission to leave Tapachula, a small city near the border with Guatemala.

“It got completely out of control because people are very desperate,” Mujica told Reuters.

Wanna-be migrants from God-knows-where clashing with law enforcement because they think they deserve to come to America.

Seeing who else Biden/Harris has been getting into the country unchecked, these guys would surely be welcomed with open arms, too.