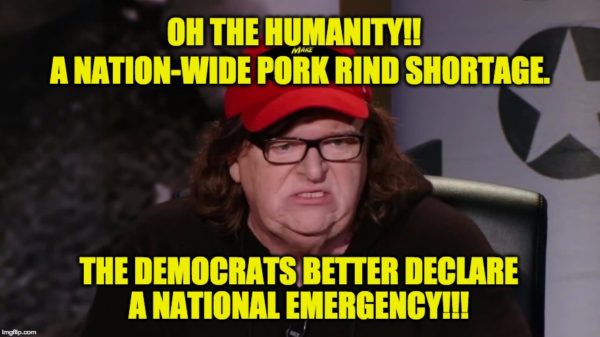 When first glancing at the headline of this post I figured that the only reason for Michael Moore demanding a declaration of a national emergency was some sort of national pork rind shortage. But after reading the piece below, I came to realize that Moore’ reason for wanting the Democrats to call for a national emergency was actually much “dumberer” than that. As my friend Joe Newby explained in th post below, the producer/director of leftist propaganda films wants the Dems to declare a national emergency until the FBI is finished with their investigation of President Trump:

On Wednesday, Michael Moore, the unhinged wealthy far-left filmmaker/progressive agitator who once demanded President Trump’s arrest, took to Instagram to demand that Democrats declare a “national emergency” until the FBI concludes its investigation into alleged ties between Trump and the Russians — even though there’s no evidence of any collusion.

The Democratic Party needs to declare a National Emergency. For the first time in our history, the President of the United States and his staff are under investigation for espionage. This announcement, by the head of the Trump-friendly FBI, is a shock to our democracy.

He wasn’t finished, calling on Democrats to let nothing advance until the investigation is complete, essentially shutting down the government:

The Democratic leadership in the House and Senate needs to bring a halt to all business being done in the name of this potential felony suspect, Donald J. Trump. No bill he supports, no Supreme Court nominee he has named, can be decided while he is under a criminal investigation. His presidency has no legitimacy until the FBI – and an independent investigative committee — discovers the truth.

FBI director James Comey said Money that the agency was “investigating the nature of any links between individuals associated with the Trump campaign and the Russian government, and whether there was any coordination between the campaign and Russia’s efforts,” though he acknowledged that the agency had thus far found no evidence to support oft-claimed “collusion” between the two.

“You’re nothing more than a conspiracy nut job,” one Instagram user said in response.

@MMFlint MICHEAL WAS PROBED BY ALIENS, AND HIS BRAIN IS BEING CONTROLLED BY EVIL DEMOCRAT POLITICIANS!????????

@Mediaite Yeah they should start acting hysterical instead of how calm and reasonable they’ve been the last few months ????

@Mediaite oh, please do. you’re already a laughing stock. this would seal the deal

Of course, a number of Moore’s low-information support base agreed.

@MMFlint And we ask that there be government censure against Trump for false accusations against U.K. and President Obama re fake wiretaps.

@MMFlint can’t you coordinate revolt at the white house? We need massive crowds to protest until he leaves office! Help!!!!

It was just last week that Moore was super-excited about Rachel Maddow’s big Trump scoop, but not for long. Back to the Resistance drawing board.