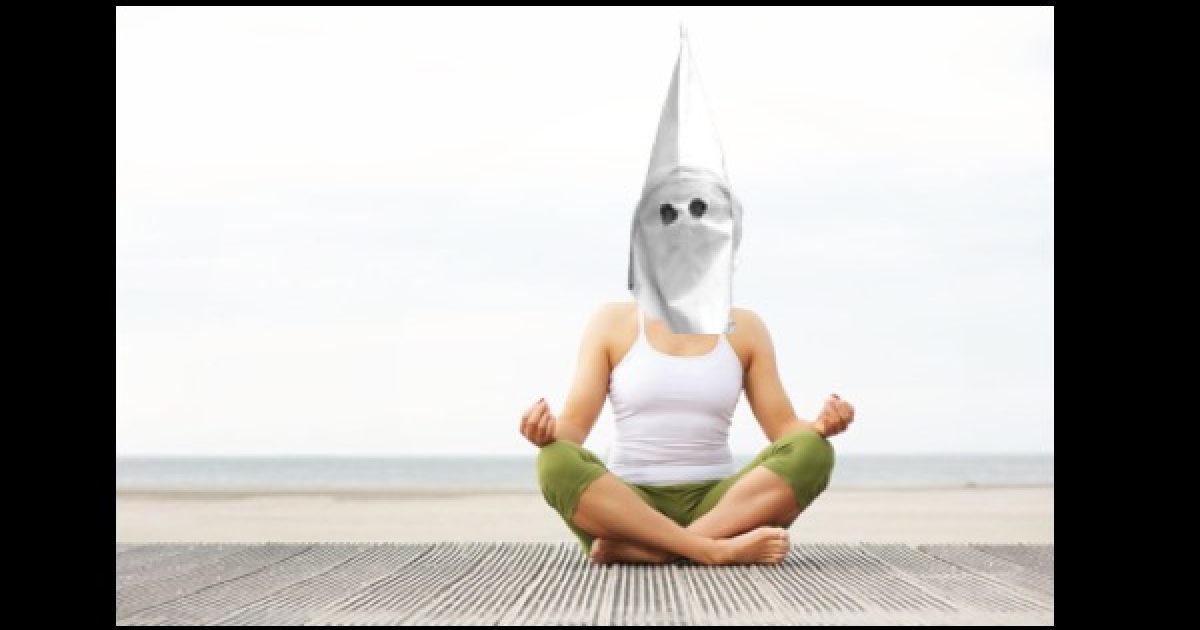 Along with Lillie Wolff,  “an antiracist white Jewish organizer, facilitator, and healer, an Organizer/Trainer with Crossroads Antiracism and has been a student and practitioner of yoga since 2003 ” Ms. Gandhi wrote an article called “Yoga and the Roots of Cultural Appropriation.” [Please note: as an “antiracist” white, bald Jewish, conservative writer, organizer, facilitator, and schlepping father of two, I would like it to be known I have no connection to Ms. Wolff beyond reading this one article]

In reality, the article is a bait and switch because it really is a tome about why they think capitalism is bad.

To the so many white people who practice yoga, please don’t stop, but please do take a moment to look outside of yourself and understand how the history of yoga practice in the United States is intimately linked to some of the larger forces of white supremacy.

(…) In today’s consumerist age, yoga thrives because one can produce many products and start businesses using yoga as the foundation. The explosion of yoga studios, yoga videos, apps, yoga pants, and other yoga swag over the last two decades is evidence of this. Yoga contributes to our economic system, but never forget this system is one built upon exploitation and commodification of labor, often the labor of black people and people of the global south.

AH..it’s not really yoga that’s bad, it’s the American economic system.  That doesn’t make sense, my father of blessed memory was a house painter, he learned his trade from his father who learned how to house paint in Russia, nothing southern about it.  As for me I learned marketing in college and spent three decades rising in the corporate ranks by working my arse off. While I hired African Americans (actually, people of all races) there was no exploitation. As for commodification of labor, any employee in any company has to prove that they are worth their salary. Otherwise, they get fired.

The two continue to beat up on capitalism:

Yoga, like so many other colonized systems of practice and knowledge, did not appear in the American spiritual landscape by coincidence; rather, its popularity was a direct consequence of a larger system of cultural appropriation that capitalism engenders and reifies.

Gee, I thought the Yoga craze was all about physical and mental fitness (not that I have ever sat on the floor with my legs crossed saying “ummmmmm.”)

While the (mis)appropriation of yoga may not be a life-threatening racism, it is a part of systemic racism nonetheless, and it is important to ask, what are the impetuses for this cultural “grabbing”? In order to delve deeper into this question, it’s useful to look at the roots of U.S. white dominant culture, the foundation of which is rooted in the enslavement of West Africans and settler colonialism.

But the ancestors of most of the white Jewish antiracists that practice yoga that I know were in Eastern Europe when West Africans were being enslaved. Truth be told, their families didn’t even come to America until 50-70 years after the civil war.

Decades of assimilation and the cultural stripping of Europeans as they arrived to the U.S. produced a white dominant culture. People of European descent replaced their ethnicities (i.e. German, Polish, English, Italian, etc.) with whiteness and the privileges that came along with that identity. This history is especially relevant right now as we are seeing white men taking to the streets in mobs shouting, “We will not be replaced.”

“We would argue one of the goals of white supremacy is to buffer white people from the pain that comes from the process of exchanging cultural grounding for the unearned power and privilege of whiteness,” they wrote. “…this modern-day trend of cultural appropriation of yoga is a continuation of white supremacy and colonialism, maintaining the pattern of white people consuming the stuff of culture that is convenient and portable, while ignoring the well-being and liberation of Indian people.”

That’s mean! How come no one has ever shown me what I had to do to get the unearned power and privilege of whiteness?

Gandhi and Wolff are liars, this article isn’t really about yoga, it’s an assault on capitalism:

This complex socio-political reality of the U.S. is key to understanding how the cultural void of white society is intimately mixed with white supremacy, capitalism, and globalization; and it is within these oppressive structures that cultural appropriation and the yoga industrial complex flourishes. People are grasping for something to belong and connect to outside of the empty and shallow societal anchors of materialism and consumerism, which do not nourish or empower people in any sort of meaningful or sustainable way.

Yep! it is that lousy capitalist system that helped many of our families including mine to come into this country as legal immigrants and sweat our way to middle class, whether we indulged in yoga or not that makes yoga racist. It is that oppressive structure the parents who send their children to Kalamazoo College afford the $56,082 it costs for one year at the school. If these two really care about human rights they would also realise that while capitalism is the only system that has enabled people to better theirselves and that the only thing the Marxist-based systems have achieved is killing nearly 100 MILLION people.

Perhaps they do know and that’s why they suckered people into reading an article they said is about yoga when it really is about why they believe capitalism sucks.