‘Get Out!’ Mexicans Fight Arriving Migrant Caravan In Tijuana 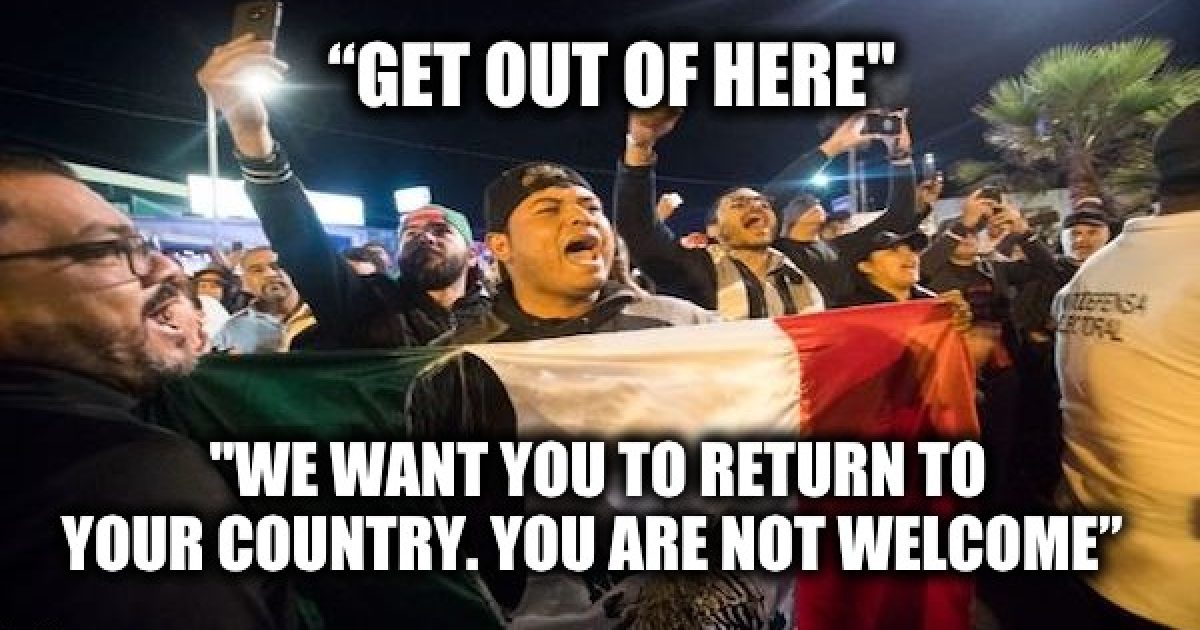 As the mainstream media continues to look down upon Americans who are concerned about the migrant caravan, most of the mainstream media is ignoring the reception the migrants are getting as they approach Mexico’s northern border. A group of “migrant caravan” illegals who made it to the Mexican border town of Tijuana were shocked when Mexican citizens gathered to throw rocks at them and scream that the illegals should turn around and go back to Central America.

Per the Desert Sun, they had, “planned to spend Wednesday night in a makeshift camp by the Pacific Ocean, steps from the tall border fence that separates Mexico and the United States. But those plans shifted in the evening after local and state officials opened a temporary shelter – and about 300 local residents gathered by the encampment to demand the migrants leave the upscale Playas de Tijuana neighborhood and go to the facility”

Pushing, shoving, kicking and a couple of blows broke out between masses of residents and migrants, illuminated by the crescent moon and mobile light towers, set up by authorities on the beach on the U.S. side of the border. More than three dozen municipal and federal police watched, separating people and trying to prevent the situation from devolving into fistfights and chaos.

After midnight, residents assaulted journalists, injuring at least three, according to reporters on the scene.

The scene was witnessed by reporters for Reuters.

“Get out of here. We want you to return to your country. You are not welcome,” a group of Tijuana citizens was heard yelling at a group of Hondurans.

Migrants shouted back and dozens of police officers had to intervene to keep peace in a city known for welcoming both American tourists and thousands of immigrants every year.

A caravan of thousands of mostly Honduran migrants who are fleeing violence and poverty at home set off for the United States in mid-October, with the bulk of them still to arrive at the border. Other large bands of mostly Salvadorans have followed.

Naturally, the migrants are wild-eyed with surprise that anyone would call them a criminal.

“We are not criminals. Why do (they) treat us like this if everywhere we have traveled in Mexico they treated us well?” the migrants shouted back, according to Reuters. “Think about the children who are here, please.”

Tijuana is a well-known party town for U.S. tourists, and it has a reputation of absorbing visitors. But the arrival of hundreds of members of the caravans has stretched to the limit migrant shelters that were already overflowing with people.

Here in the U.S., we are being told that All Mexicans support the migrant caravans, but according to Reuters, “a sizeable minority of Mexicans opposed to aiding the migrants” as they head north to invade the U.S.

An Oct. 26-28 survey of 1,000 Mexicans by polling firm Consulta Mitofsky showed that 51.4 percent were in favor of helping or protecting the migrants, while 33.8 percent took the opposite view, believing that they should return home. The remaining respondents expressed no opinion.

Folks in Tijuana feel that their resources have been stretched to the breaking point, and according to Reuters, there is even a WhatsApp group of Mexicans that formed to harass and scare off the Central American migrants.

So, not everyone in Mexico is all excited to welcome these invaders.