Should Garland Be Impeached For Perjury 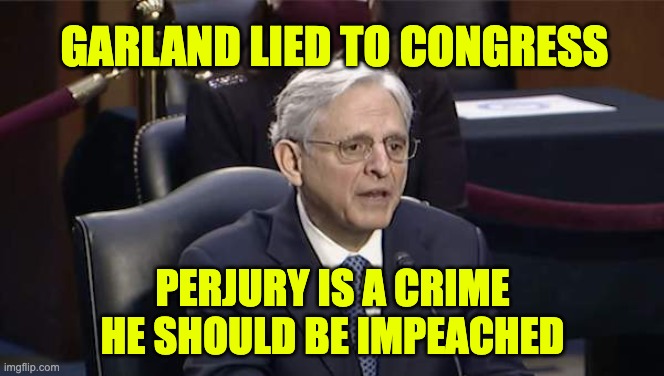 Whistleblower documents now show that Biden Attorney General Merrick Garland lied when he told Congress the FBI was not targeting and labeling parents as “terrorists” and “threats” after speaking out against Critical Race Theory at school board meetings across the country.

The newly released documents prove that the FBI’s counterterrorism department has been compiling and tracking parents who have spoken up about the racist, anti-white CTR ideas being fed to kids at schools everywhere. The documents show the corrupt FBI justified these investigations by labeling parents as “threats” to school board members.

We share an obligation to ensure all individuals are able to do their jobs without threats of violence or fear for their safety. This can only be accomplished with effective coordination and engagement with our law enforcement partners and United States Attorney offices,” says the email, sent on behalf of the assistant directors of the FBI’s counterterrorism and criminal divisions.

“As a result, the Counterterrorism and Criminal Divisions created a threat tag, EDUOFFICIALS, to track instances of related threats. We ask that your offices apply the threat tag to investigations and assessments of threats specifically directed against school board administrators, board members, teachers, and staff,” it continues.

“The purpose of the threat tag is to help scope this threat on a national level and provide an opportunity for comprehensive analysis of the threat picture for effective engagement with law enforcement partners at all levels.”

The emails show that the anti-American FBI labeled parents with the “threat tag” in files and communications.

That email was sent the day before AG Garland testified to Congress. as this video explains:

The emails also note that the FBI bosses are telling field agents to make up a “federal nexus” so they can throw parents in jail as “federal criminals.” In other words, Biden’s corrupt FBI is looking to invent and manufacture bogus federal charges to attack parents who only want to stop school boards from exposing their kids to anti-American, left-wing, racist “educational” materials.

Mitch McConnell did America a big favor by keeping Garland off the Supreme Court!

Looks like the real threat to America is the corrupt FBI and a House Democratic caucus mostly populated by political hacks.

Much of this post was first seen at Washington Exterminator