It All Stems From Cuomo's Ego 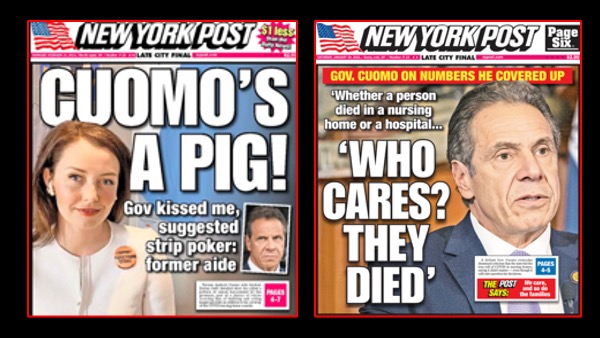 While it warms my Minnesota heart to see New York Gov. Andrew Cuomo receive his comeuppance, the reasons why are utterly transparent.

When sentient folks noted Cuomo’s policies killed more than 10,000 nursing home residents the past year, the national press yawned. But now that we hear the governor is inappropriate with younger women, it’s a bombshell story?

Cuomo has long been a sleazebag, no doubt, so why focus on a few allegations instead of thousands of preventable deaths? People’s parents and grandparents died due to Cuomo’s decisions, which the same media applauded. I realize a #MeToo frenzy sells more airtime than dead octogenarians; however, the focus on recent harassment claims is a distraction from life and death matters.

Finally facing heat for his policy of putting COVID-19 patients back into nursing homes and subsequent undercounting of nursing home deaths via a report from New York’s attorney general, leaked comments from a top Cuomo aide proved it was done intentionally to avoid an investigation.

This a serious fiasco since it also forces Democrats and corporate media to challenge their beloved lockdown policies.

Progressives instead claim they’ve always disliked Cuomo and crush him with their preferred weapon because they cannot admit their hero was actually a disaster on COVID.

It’s easier for media to laugh at creepy male behavior toward women than talk about elderly Americans being left to die.

The news distracts us from a “sociopathic executive order that required nursing homes to accept patients still infected with the coronavirus,” John Nolte wrote earlier this week. “That, after all, is the real scandal here, the true scandal, an act so monstrous Cuomo knew he had to cover it up, which he did by falsely blaming the order on the Trump administration and then lying about just how many seniors died as a result.”

The three-term governor’s awkward-but-defiant Wednesday press event, which did not feature a resignation, was panned for inauthenticity. Surely a 63-year-old repeatedly saying he had no idea he made anyone uncomfortable is not Emmy-worthy. Or maybe it is?

Cuomo’s popularity and power also are plummeting.  New York’s Legislature will revoke most of his pandemic-emergency powers this week.

An Emerson College Poll found his job approval is down nearly 35 points from last summer, with nearly half of voters saying he should resign now. His arbitrary use of emergency powers — most with no basis in science — also diminished the public’s trust.

“Even before the current scandals, there was something gross about Cuomo’s glee in his public adulation last year,” left-leaning comedian John Oliver said this week.

Cuomo is the third straight New York governor to be accused of misconduct. If Democrats removed Cuomo or created enough pressure that he had to resign, perhaps it could send a signal to other New York officials they’ll face the consequences for harassment, bullying, and ignominious policies that kill seniors.