Lying About Meddling, Collusion, And Ukraine Vs. Russia 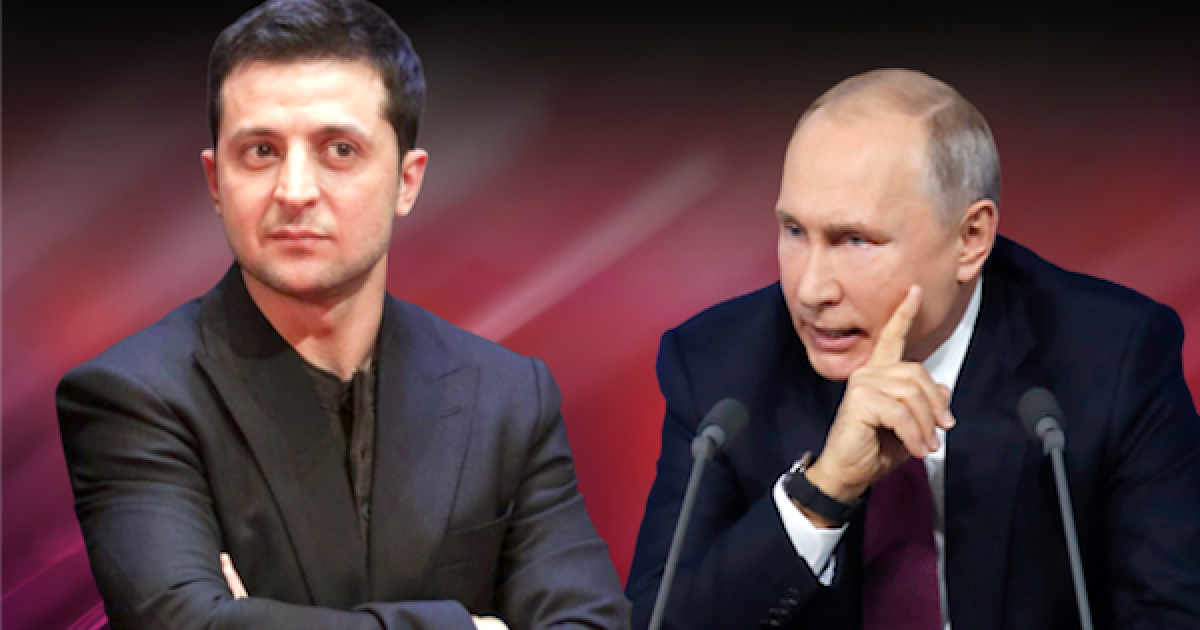 This point occurred to me forcibly while watching Ted Cruz talk to Chuck Todd on Meet the Press on Sunday.  More on that, including the video below.

The topic here is what we’re talking about when the question of “Ukraine meddling in the 2016 election” comes up.  The reality is that there’s not a whole lot there if you emphasize the words “Ukraine meddling.”  There is substance, yes.  A Ukrainian court has certified that it thinks Ukraine meddled in the U.S. election.

But the real issue is whether Americans leveraged cooperation from Ukraine to behave unethically – and possibly to behave criminally – in the 2016 election.  Ukraine’s actions could not have any significant effect, undertaken without the complicity of Americans.

The truth about Russia’s actions, which we need not hold in doubt (although sober analysts have made good-faith arguments for doubting some of the particulars), is that they amounted to comparatively little, and had no impact on the election’s outcome.

But Russia’s demonstrated actions, unlike Ukraine’s, were of such a kind that they might conceivably have had an impact without intentional collusion by Americans.  This point has the highly significant corollary that the Russians probably (indeed, presumably) inaugurated an interference campaign for their own purposes and agenda.  That’s different from the premise of “Ukrainian interference.”

According to the officially accepted narrative, Russia’s actions were the following: placing and boosting political themes on social media, penetrating the voter information systems of several U.S. states, and (allegedly) pilfering and publicizing the emails of Democratic party organizations.

The case that such actions could realistically have affected the outcome of the election is weak in the extreme.  If Russian hackers had succeeded in manipulating voter information, that could have resulted in meaningful interference with the election.  But no evidence has been alleged that they did succeed in that regard.  All of the intrusions were detected and shut down.

The idea that boosting political themes on social media affected the election is laughable, especially in light of the examples we’ve been offered.  The Russian “troll farm” is supposed to have amplified themes Americans were touting anyway, from “Black Lives Matter” to “Hillary for Prison.”  Americans didn’t need Russians to inflict those themes on us.

As for the stolen Democratic emails, hardly anyone in America actually read them.  The majority of voters, if they had even heard about the emails, knew only that “the Russians had hacked them.”  That was hardly going to swing the election one way or the other.

In fact, the main thing that would make Americans anxious about Russian interference, as opposed to not aware of and utterly unaffected by it, is the incessant flogging of “Russian interference” as a theme by the media and Democratic politicians.

Had the Russian effort on social media been far, far more massive, and the cyber-attacks on voter data servers more successful, we might then be talking about disinformation and cyber interference that mattered.  But we’re not.  The intrusion was worth taking action against Russia because it was attempted interference – not because it made a difference.

Meanwhile, the Mueller probe ostensibly sought to establish whether Americans – implicitly, members of the Trump campaign – “colluded with” the Russians to interfere with the election.  The Mueller operation followed an FBI operation initiated in 2016 to – ostensibly, again – investigate the same question.

Neither effort ever uncovered any evidence of collusion with Russia by then-candidate Trump or members of his campaign.  The matter has been exhaustively investigated, and no evidence found.

The outlines of “Ukrainian interference” look different.  There is no national intelligence assessment recounting a history of Ukrainian attempts to poison American politics with disinformation, as there is in the Russian case.  So the concept seems to start with a blank slate if the idea is to make a parallel case about Ukrainian interference.

The evidence of Ukrainian intent is lacking, if we try to see something with the same outlines as Russian intent.

But there is, according to a Ukrainian court, evidence of activities in Ukraine that amounted to interference in the U.S. election.  There is also evidence of potential collusion with Americans (some of which may be the same evidence), which Ukrainians have been trying to provide to American officials for months.

And this is where the difference crystallizes, and the picture resolves itself.  Remember Chuck Todd and Ted Cruz?  Here is the video from Sunday 8 December.

In case you missed my full interview on @MeetThePress with @chucktodd where I discussed the Democrats’ attempt to impeach @realDonaldTrump, regardless of facts or evidence, watch it here ⤵️ pic.twitter.com/8a7Jv9Mqvd

Senator Cruz addresses Todd’s questions — trenchantly — in the spirit, they are asked.  But although Cruz is right that there’s evidence of Ukrainian interference in 2016 – mainly cooperating to inject information about Paul Manafort (some of it dubious) into the American political infosphere – the whole Todd interview misses the point.

The notorious Politico article from January 2017 (link above), about Democratic operative Alexandra Chalupa pumping Ukrainian sources for information on Manafort to “sabotage” Trump, was originally one of the most significant data points in this regard.

But several data points have been added since.  Based on Ukrainian information, John Solomon reported in April 2019 on White House meetings in 2016 with Ukrainian law enforcement officials, at which reopening a probe of Manafort in Ukraine was the major topic.  And recent research by a guest author at Gateway Pundit confirmed not only that these meetings occurred, in January and February of 2016, but that they were honchoed by the NSC staffer with the Ukraine portfolio, Eric Ciaramella, who – although he left that job in 2017 – has figured in more recent developments with Ukraine.

The information now available to the public shows both the Democratic Party and the Obama White House putting pressure on Ukraine to deliver the goods on Manafort.  The timing coincided with Manafort’s arrival on the Trump campaign team (in late March 2016).

Remember that Alexandra Chalupa’s key meetings with Ukrainians and State Department officials took place between January and May 2016.  The White House meetings chaired by Ciaramella were in January and February.

And in March 2016, Joe Biden (to whose staff Ciaramella was formally appointed) had his famous smackdown with Ukraine over Ukrainian prosecutor-general Viktor Shokin, whom Biden wanted to be fired.  Shokin was fired, on 29 March.

Shokin’s permanent replacement, Yuriy Lutsenko, was appointed on 12 May 2016.  On 29 May 2016, Ukrainians from Lutsenko’s organization “leaked” information about Paul Manafort, which Nellie Ohr emailed to her husband from a news article, and which the U.S. media busied themselves turning into an anti-Trump theme.  At the same time, very similar information was being fed into the Steele dossier, which was produced in installments with dates from June to December 2016.

Lutsenko said the leak was made without his knowledge and against his wishes.  Oddly, the Ukrainian law concerning prosecutors-general had had to be changed to allow for Lutsenko’s appointment, because he came to the job with no legal background at all.  He was an engineer by trade and a political operative for then-President Petro Poroshenko.  Lutsenko didn’t have experience or a professional constituency in the prosecutor-general organization – meaning, for the purposes of this analysis, that he would be especially vulnerable to being submarined by the people who worked for him.

It is highly doubtful, however, that the Ukrainian prosecutor-general organization would have tried to take down a candidate in the U.S. 2016 election for some purpose of its own.  Even if an oligarch or group of oligarchs were behind it, the method of exposing information about Manafort has an off, ring to it, as a Ukrainian initiative.

And that’s aside from the fact that it served as an attack on Trump, for which Ukraine had no evident purpose.

Without suggesting that there is conclusive proof of American motives being behind this, it’s fair to say there are legitimate questions that need answering.

As a thinking aid, here are two graphic presentations that separate the Russian and Ukrainian propositions involved in this discussion.

The first depicts the propositions as they are generally framed in drive-by “analysis” that merely sees Russian or Ukrainian interference as parallel concepts. 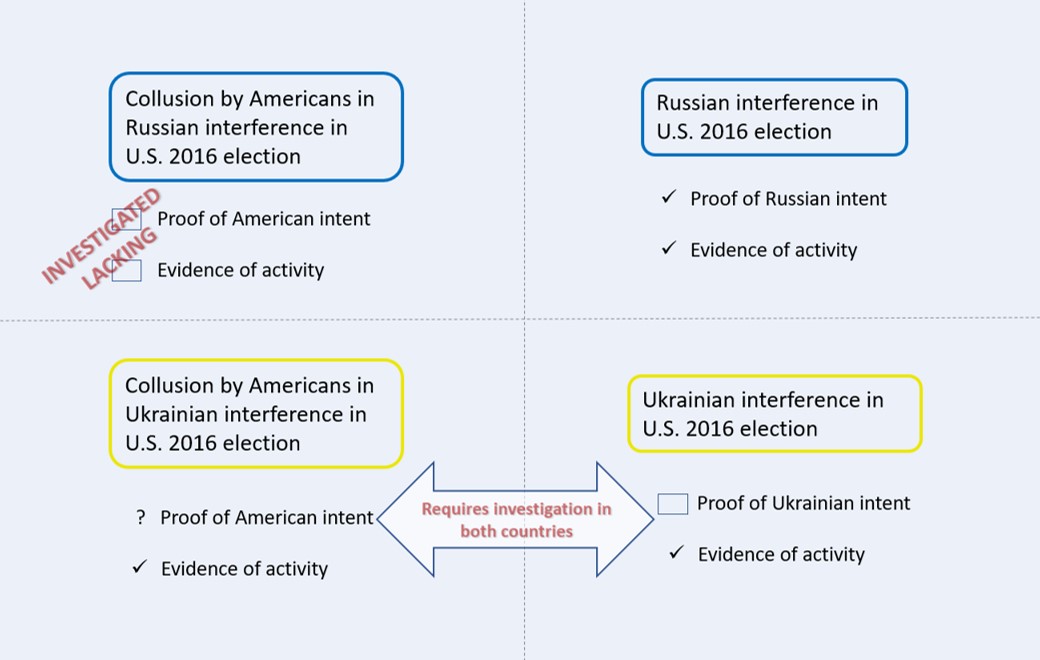 The second graphic focuses on what it’s really about.  The media, Democratic politicians, and officials of the intelligence and law enforcement community have tried for years to depict “Russia collusion” as if Trump didn’t just collude but actually solicited Russian interference in the 2016 election.  They never offered any evidence of this and may have committed crimes in trying to manufacture evidence. 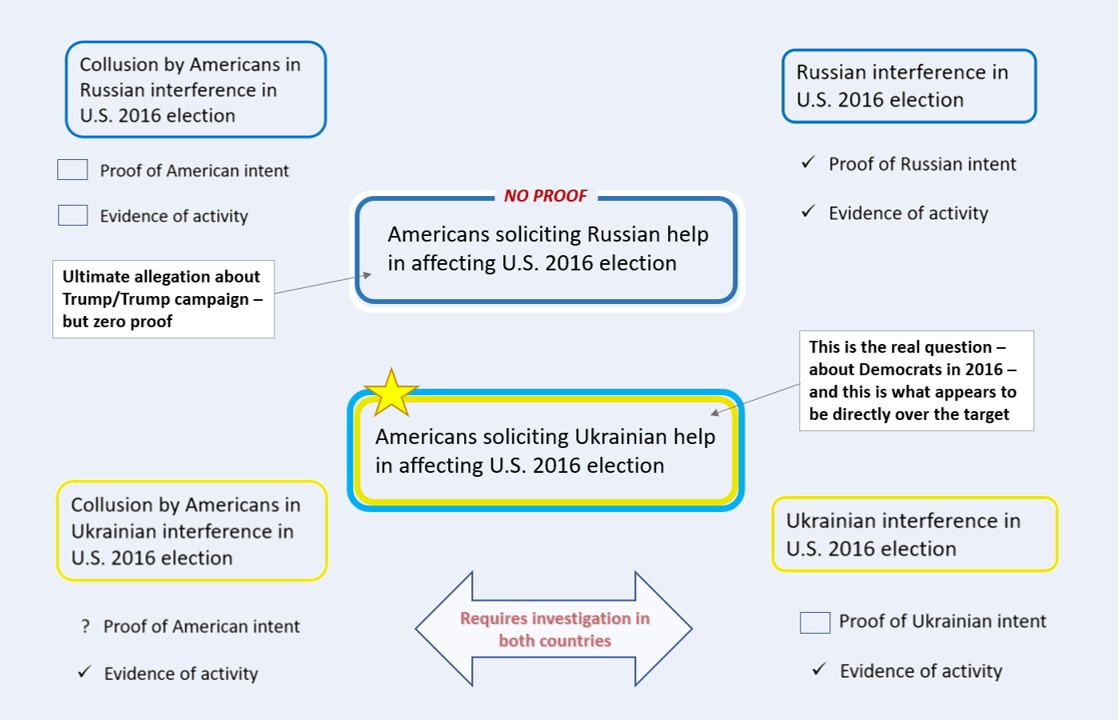 The emerging “Ukrainian interference” question is the analog of that proposition.  It’s the question whether Americans – Democratic operatives, Obama officials, the media – solicited Ukrainian interference in the 2016 election in the form of investigative information on (at a minimum) Paul Manafort.

To the extent that such information was improperly vetted, and/or laundered through the Steele dossier, and used to obtain FISA authorization on surveillance of Carter Page, some of this activity may have been criminal.

In any case, it’s clearly necessary to pursue the matter.  It’s also clear that the sensitivity level of senior Democrats and the media on this question is off the charts.  They have gone to general quarters over the fact that Trump is pursuing it.  They’re moving heaven and Earth to turn the emerging picture on its head: to try to make it appear that Trump is seeking to use Ukraine to interfere in the 2020 election.

It’s hard to avoid deducing that President Trump and his henchman Rudy Giuliani are right over the target.