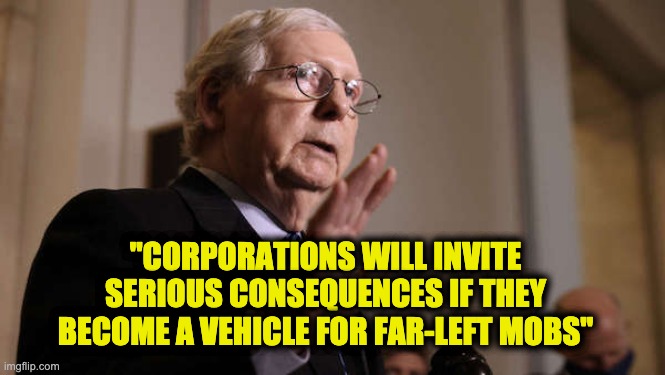 Senate Republican leader Mitch McConnell (R-KY) threatened “serious consequences” for corporations that retaliate against Republican-led efforts to pass new state election laws and warned against what he described as private-sector advocacy for progressive policy goals, from environmental regulation to gun control.  His statement’s most immediate cause was the liberal attacks on the Georgia election laws backed up by some major corporations operating in the state.

The left is fighting against the new Georgia Election Law because they rely on voter fraud to elect their candidates. After weeks of spewing lies about the law and threatening boycotts of businesses in Georgia, some frightened and/or woke businesses have joined the leftist attacks.  MLB moved the All-Star game out of Atlanta, hurting a city whose population is 60+% minority. Corporations threatening Georgia because of the bill include UPS, Merck, Delta Airlines, Coca Cola (which recently made news when they told their caucasian employees to act less white).

While not mentioning the specific companies or the consequences, McConnell accused the woke companies of “dabbling in behaving like a woke parallel government” and said that they “will invite serious consequences if they become a vehicle for far-left mobs to hijack our country from outside the constitutional order.”

He also attacked the Democrats in DC for lying about the bill to help them pass the HR-1 bill. “Washington Democrats want to pass a sweeping bill that would let them rewrite all 50 states’ election laws and turn the Federal Election Commission into a Democrat-run partisan body.”

Bravo for Senator McConnell–his statement has other gems. Read his full statement originally published on his website, below:

“We are witnessing a coordinated campaign by powerful and wealthy people to mislead and bully the American people.

“The President has claimed repeatedly that state-level debates over voting procedures are worse than Jim Crow or ‘Jim Crow on steroids.’ Nobody actually believes this. Nobody really thinks this current dispute comes anywhere near the horrific racist brutality of segregation. But there’s an old cynical saying that ‘history is just the set of lies agreed upon.’ And a host of powerful people and institutions apparently think they stand to benefit from parroting this big lie.

“The Washington Post has repeatedly debunked White House lies about legislation in Georgia: ‘In reality, Election Day hours were not changed and the opportunities to cast a ballot in early voting were expanded.’ Plenty of Democrat-run states allow fewer days of early voting than the new Georgia law requires. More than 70 percent of Americans, including a majority of Democrats and a supermajority of independents, favor commonsense voter I.D. requirements; even so, Georgia will accept alternatives to driver’s licenses to verify absentee voters. All the facts disprove the big lie.

“This disinformation has a purpose. Washington Democrats want to pass a sweeping bill that would let them rewrite all 50 states’ election laws and turn the Federal Election Commission into a Democrat-run partisan body. This power grab is impossible to defend, so the left wants to deflect. Instead of winning the debate, they want to silence debate by bullying citizens and entire states into submission.

“It’s jaw-dropping to see powerful American institutions not just permit themselves to be bullied, but join in the bullying themselves. Wealthy corporations have no problem operating in New York, for example, which has fewer days of early voting than Georgia, requires excuses for absentee ballots, and restricts electioneering via refreshments. There is no consistent or factual standard being applied here. It’s just a fake narrative gaining speed by its own momentum.

“Our private sector must stop taking cues from the Outrage-Industrial Complex. Americans do not need or want big business to amplify disinformation or react to every manufactured controversy with frantic left-wing signaling.

“From election law to environmentalism to radical social agendas to the Second Amendment, parts of the private sector keep dabbling in behaving like a woke parallel government. Corporations will invite serious consequences if they become a vehicle for far-left mobs to hijack our country from outside the constitutional order. Businesses must not use economic blackmail to spread disinformation and push bad ideas that citizens reject at the ballot box.”