McCarthy Can’t Let The Fringe Intimidate Him On Ukraine 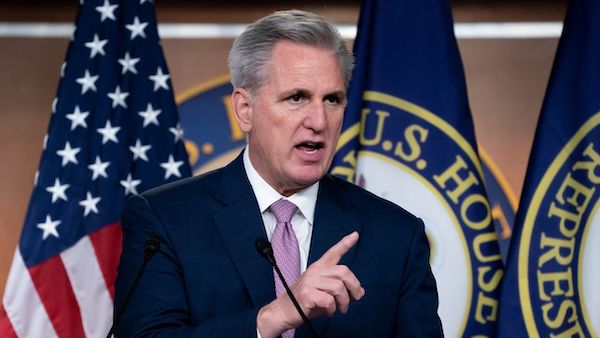 The midterm elections look more and more like a veritable tsunami for Republicans, as voters prefer the GOP on crucial issues like inflation, crime, and national security.

But there’s long been a common refrain among conservatives that “Republicans know how to blow it”; with the recent exception of when an outgoing president actually did blow it, I usually scoff at that pessimistic cliché.

However, Rep. Kevin McCarthy, the likely next Speaker of the House, could now be hindering the party he hopes to lead.

“I think people are gonna be sitting in a recession, and they’re not going to write a blank check to Ukraine,” McCarthy claimed this week when asked how a Republican majority would approach Russia’s war of ethnic cleansing.

While the far left has turned anti-Ukraine, the isolationist right, led by a popular cable news host and his left-wing pro-Putin guests, constantly do the evil man’s bidding and question the legitimacy of Ukraine’s cause.

Why would McCarthy seek membership in either group, especially when, despite President Joe Biden’s claims, most Republicans do not wish to defund Kyiv.

Sen. Jim Risch, McCaul’s upper chamber counterpart on foreign affairs, argued last week, “Better arming and equipping of Ukraine will help save lives and give Ukraine the capacity to end this war faster.”

Marco Rubio, perhaps the foremost Republican senator on foreign affairs, has opposed Russian aggression from the onset and made this clear again during his Oct. 18 U.S. Senate debate.

So if the GOP isn’t likely to cut off Ukraine, why would McCarthy commit to an unpopular course of action that pits him against most of his members? He does not need to appease some naive populists in deeply red districts who are most interested in being on cable news.

Financial oversight is a reasonable concern, which is why the aid appropriated by Congress was accompanied by provisions requiring regular reports from the Pentagon.

Despite what nationalists believe, most of the funds appropriated by Congress end up with American defense contractors. If the loud but minor isolationist factions — left and right — love taxpayer-backed subsidies for U.S. manufacturing jobs, they’re hypocrites to not applaud this.

As for the prospect that Putin could suffer enough battlefield failures to make him resort to extreme measures, America’s retreat is unlikely to deter him. And despite what attention seekers like Tulsi Gabbard spew to Tucker Carlson, our contributions do not make us less prepared to confront Chinese aggression. A loss for Moscow is a loss for Beijing, and every Russian defeat makes the prospect of Xi Jinping invading Taiwan less appealing.

“End this war and pivot to China,” as Mollie Hemingway or Greg Gutfeld might rant, is moronic.

Perhaps McCarthy was just saying what he thinks Peter Thiel and entertainment twitter want to hear? If so, he’s weak and surely not Mitch McConnell. Senate Republicans, under the indefatigable Kentuckian, will support freedom over tyranny.

This lady expresses the pain and fury felt by millions of Ukrainians toward Vladimir Putin https://t.co/wnnUTx3qy0

So while ignorance marches on in fever swamps where Ukraine is somehow the aggressor in a war where they’re invaded, the money we spend is the best military funding we’ve spent in generations. As Ukraine continues to amaze the world, it shows unbelievable returns without risk regarding what we want the money to do.