Her Political Opponent May Turn Out To Be Her Worst Nightmare 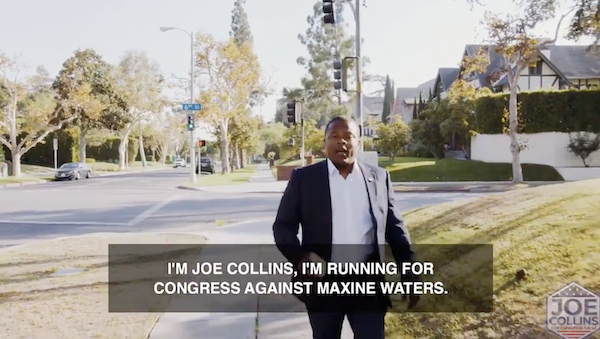 Mad Maxine blew Joe Collins off when her lawyers were sent proof of honorable service and a cease-and-desist letter. That was a mistake.  Mad Maxine libeled

We’ve heard a lot of overheated rhetoric from Mad Maxine Waters over the years. She calls people racist without any evidence. She was one of the loudest voices encouraging public confrontations with Republicans.

She got used to getting away with that crap without any serious consequences, even when she’s gotten caught with her hands in the cookie jar. For example, in 2010, Waters was accused of helping an unsound bank (OneUnited) receive government aid to help her husband, who was an officer and stock-owner of the bank. She avoided any problems by throwing her grandson and chief of staff under the bus.

Maybe that’s why she thought nothing of slandering the Republican she was running against last November.

But this will come back and bite her. The man she slandered is no ordinary Republican. This guy is a veteran. He is black. And he was honorably discharged in connection with his disability.

When Joe Collins(R) brought legal action against her, she ignored it as some sort of a campaign stunt, letting it go unanswered.

…”And she ignored it. And she went into default. And, you know, after the default was entered, then she started trying to put in paperwork, when she saw that I wasn’t playing games. And, here we are now, Maxine’s trying to get documents filed to the court the last minute even though she’s already defaulted. And it’s been a complete mess. We won in court yesterday …

What does he want to ask her? Questions about her OWN sordid history of corruption, which she will answer under oath. Which he will use in the rematch against her next time around.

In John Solomon’s podcast interview with Collins, he covers a lot of interesting ground, not the least of which is his plan to fight her by her own rules.

If her side is using ballot harvesting and is legal there, why should he put himself at a disadvantage by not pressing that same advantage?

Kicking her ass in court for slander? That will go a LONG way to getting the name recognition it will take to defeat someone who has been in office since, what, the Hoover Administration or something?

That’s the benefit it will give to him. But for the wider debate?

What happens to the Democrat ‘political misinformation’ narrative if a slander case proves that the only way one of their own biggest names could only beat a Republican was by publishing baseless lies about a man who served honorably. [And since Democrats also love to play the intersectionality cards, did we mention he was a disabled Black Navy veteran?]

Speaking of disinformation, the interview covers an interesting tidbit about how he switched from being hostile to Trump to an open supporter. It had something to do with comparing news reports against the original sources. Maybe more people should try it.

We don’t yet know much about this guy’s record or his policies, but we will certainly enjoy watching him become Mad Maxine’s personal worst nightmare.