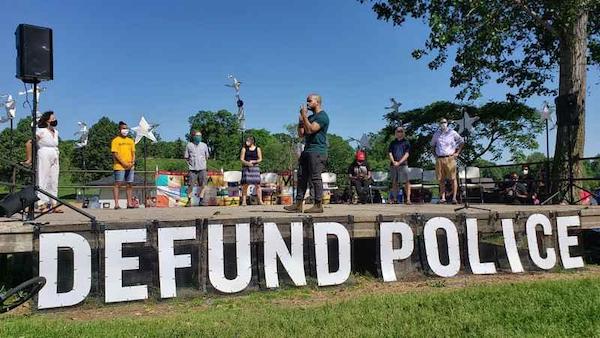 A pair of lying Minneapolis City Council members are claiming “defund the police” was never part of their planned “framework,” just days after a vote to slash an additional  $7.7 million from the department’s budget while homicide rates have soared in the city.

“‘Defund’ is not the framework the council has ever chosen,” Fletcher claimed.

It is rather difficult to take Fletcher and Cunningham seriously when they suggest the plan was never about defunding the police, especially when the Council is notably on record as supporting such efforts.

Over the summer, the council took numerous steps to dismantle the department, including an amendment to remove $1 million from their budget and reallocate it toward hiring “violence interrupters.”

In fact Fletcher one of the authors of the City Council amendment to change the city charter to allow it to dismantle the Police Department. He even wrote an op-ed in Time Magazine saying:

Every member of the Minneapolis City Council has now expressed the need for dramatic structural change. I am one of many on the Council, including the Council President and the Chair of Public Safety, who are publicly supporting the call to disband our police department and start fresh with a community-oriented, non-violent public safety and outreach capacity.

In June, Fletcher and Cunningham both appeared with seven of their colleagues on a stage bearing a huge sign reading ‘Defund Police’ during a protest in Powderhorn Park. There they declared their intent to ‘dismantle’ and ‘abolish’ the police department (see picture above).

But now he is saying that dismantle didn’t mean dismantle (I suppose that depends on what “is” is).

Perhaps they didn’t read the sign in front of the stage and ignored the speeches. And maybe Fletcher’s Time Mag op-ed was written by a ghostwriter and he never read it—but I doubt it.

It wasn’t just talk, in July, the council took several steps toward dismantling the city’s police department, including approving an amendment to remove $1 million from the police department and reallocate it toward the health department to hire “violence interrupters” who are intended to defuse potentially violent situations.

Just two months after that July vote Minneapolis City Council members were dismayed over a surge in violent crimes and they grilled the police chief about it. Council members pressed police Chief Medaria Arradondo about the uptick in crimes that included daylight carjackings, robberies, assaults, shootings, and street racing. Arradondo said about 100 officers have left the department or have taken a leave of absence since the start of the year, which is more than double the typical number of officers who either step down from the department or are inactive that year. It got so bad that the Minneapolis Police Department (MPD) told residents they should “be prepared” to hand over their phones, wallets, and purses to robbers.

While these two council members play semantics on their phrasing of reallocating funds as opposed to defunding, the city suffers. Compared with last year, according to Minneapolis Police Department data, murders are up 90% so far in the city.

It takes a special kind of  ignorant to call for defunding the police. It becomes even more ridiculous when the people who defunded the police are shocked when cops start quitting and crime increases. Then again, when dealing with liberals, nothing is off the table.  And now that they started defunding and it’s having the logical result of an increase in crime they’re saying they didn’t say what they said.

But one week ago the Minneapolis City Council voted to “redirect” $7.77 million from the police department and toward other programs despite the rise in crime.

It takes a special kind of  ignorant to call for defunding the police. It becomes even more ridiculous when the people who defunded the police are shocked when cops start quitting and crime increases. One can’t even call it an unintended consequence. Most people will call it an expected result. But when they say defunding the police wasn’t in their framework, these liberal politicians aren’t being stupid, just expressing their belief that the Minnesota public is stupid.