Johnson Was Part Of Delegation To Ukraine With Vindman 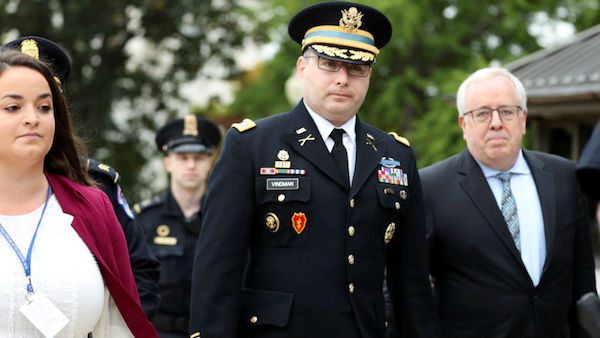 The mainstream media is all agog over the fact that President Trump had Lt. Col. Vindman transferred out of the White House staff, claiming he was fired and it was revenge. He wasn’t fired, he still has a job at the same salary. And as far as why it was done, Allow me to suggest it was because the President couldn’t trust him. And the evidence of why he couldn’t be trusted is being ignored by the media. It was revealed in November before he testified before the public version of Adam Schiff’s Kangaroo Court.

In November 2019 Sen. Ron Johnson (R-WI) sent a letter (embedded below) to Reps Jordan (R-OH) and Nunes (R-CA) at Jordan’s request which among other things raised questions about Lt. Col. Vindmans’ credibility, and accused him of being an insubordinate leaker and confirmed the President’s reasons for the 55-day delay in Ukraine aid were the same as the President’s public statements.

Johnson went to Ukraine as part of the U.S. delegation to President Volodymyr Zelensky’s inauguration on May 20. Vindman was part of the delegation also. In the letter, the Senator suggested that Lt. Col. Vindman may be among the government bureaucrats who aim to push back on Trump’s policies “by leaking to the press and participating in the ongoing effort to sabotage his policies and, if possible, remove him from office.” sen johnson letter,

As Chairman of the Homeland Security Committee and a member of the Foreign Relations Committee, Senator Johnson has been intimately involved in US/Ukraine relations, including frequent conversations with President Trump and administration officials on the subject.

In the letter Senator Johnson wrote:

I was the only member of Congress joining the executive branch’s inaugural delegation led by Energy Secretary Rick Perry, Special Envoy Kurt Volker, U.S. Ambassador to the European Union Gordon Sondland, and Lt. Col. Alexander Vindman, representing the National Security Council.  I arrived the evening before the inauguration and, after attending a country briefing provided by U.S. embassy staff the next morning, May 20, went to the inauguration, a luncheon following the inauguration, and a delegation meeting with Zelensky and his advisers.

The main purpose of my attendance was to demonstrate and express my support and that of the U.S. Congress for Zelensky and the people of Ukraine.   In addition, the delegation repeatedly stressed the importance of fulfilling the election mandate to fight corruption, and also discussed the priority of Ukraine obtaining sufficient inventories of gas prior to winter.

Two specific points made during the meetings stand out in my memory as being relevant.

The first occurred during the country briefing.  I had just finished making the point that supporting Ukraine was essential because it was ground zero in our geopolitical competition with Russia.  I was surprised when Vindman responded to my point. He stated that it was the position of the NSC that our relationship with Ukraine should be kept separate from our geopolitical competition with Russia.   My blunt response was, “How in the world is that even possible?”

I do not know if Vindman accurately stated the NSC’s position, whether President Trump shared that viewpoint, or whether Vindman was really just expressing his own view.  I raise this point because I believe that a significant number of bureaucrats and staff members within the executive branch have never accepted President Trump as legitimate and resent his unorthodox style and his intrusion onto their “turf.”  They react by leaking to the press and participating in the ongoing effort to sabotage his policies and, if possible, remove him from office.  It is entirely possible that Vindman fits this profile.

In other words, Johnson is saying that Vindman is a never-Trumper.

The Wisconsin Senator went on to slam Vindman’s opening statement during the “secret” part of the Schiff committee testimony:

Quotes from the transcript of Vindman’s opening remarks and his deposition reinforce this point and deserve to be highlighted.  Vindman testified that an “alternative narrative” pushed by the president’s personal attorney, Rudy Giuliani, was “inconsistent with the consensus views of the” relevant federal agencies and was “undermining the consensus policy.”

The last line was significant in itself. There is no such thing as a consensus policy. Foreign policy comes from the President–it is a consensus of one, and Johnson agrees.

Vindman’s testimony, together with other witnesses’ use of similar terms such as “our policy,” “stated policy,” and “long-standing policy” lend further credence to the point I’m making.   Whether you agree with President Trump or not, it should be acknowledged that the Constitution vests the power of conducting foreign policy with the duly elected president.  American foreign policy is what the president determines it to be, not what the “consensus” of unelected foreign policy bureaucrats wants it to be.  If any bureaucrats disagree with the president, they should use their powers of persuasion within their legal chain of command to get the president to agree with their viewpoint.   In the end, if they are unable to carry out the policy of the president, they should resign.  They should not seek to undermine the policy by leaking to people outside their chain of command.

Johnson also wrote about a meeting he had with the President (along with Rick Perry, Kurt Volker, and Gordon Sondland), that seemed to back up the President’s claim of reservations about giving aid to a corrupt Ukraine.

He expressed strong reservations about supporting Ukraine. He made it crystal clear that he viewed Ukraine as a thoroughly corrupt country both generally and, specifically, regarding rumored meddling in the 2016 election.  Volker summed up this attitude in his testimony by quoting the president as saying, “They are all corrupt. They are all terrible people. … I don’t want to spend any time with that.”  I do not recall President Trump ever explicitly mentioning the names Burisma or Biden, but it was obvious he was aware of rumors that corrupt actors in Ukraine might have played a part in helping create the false Russia collusion narrative.

(…)It was obvious that his viewpoint and reservations were strongly held, and that we would have a significant sales job ahead of us getting him to change his mind.   I specifically asked him to keep his viewpoint and reservations private and not to express them publicly until he had a chance to meet Zelensky.  He agreed to do so, but he also added that he wanted Zelensky to know exactly how he felt about the corruption in Ukraine prior to any future meeting.  I used that directive in my Sept. 5 meeting with Zelensky in Ukraine.

As for the reasons the aid was being held up, the President’s private rationale to Sen. Johnson was the same as he gave publicly.

Johnson called Trump on August 31, before the Senator’s September trip to Ukraine and other European countries, Johnson asked Trump if he could tell the Ukrainian president that the hold on aid would be lifted?

The president was not prepared to lift the hold, and he was consistent in the reasons he cited.   He reminded me how thoroughly corrupt Ukraine was and again conveyed his frustration that Europe doesn’t do its fair share of providing military aid.  He specifically cited the sort of conversation he would have with Angela Merkel, chancellor of Germany.  To paraphrase President Trump: “Ron, I talk to Angela and ask her, ‘Why don’t you fund these things,’ and she tells me, ‘Because we know you will.’  We’re schmucks. Ron. We’re schmucks.”

When Trump said no, Johnson asked about any quid pro quo:

I asked him about whether there was some kind of arrangement where Ukraine would take some action and the hold would be lifted.  Without hesitation, President Trump immediately denied such an arrangement existed. As reported in the Wall Street Journal, I quoted the president as saying, “(Expletive deleted) — No way.  I would never do that.  Who told you that?”  I have accurately characterized his reaction as adamant, vehement and angry — there was more than one expletive that I have deleted.

Based on his reaction, I felt more than a little guilty even asking him the question, much less telling him I heard it from Sondland. He seemed even more annoyed by that, and asked me, “Who is that guy”?  I interpreted that not as a literal question — the president did know whom Sondland was — but rather as a sign that the president did not know him well.  I replied by saying, “I thought he was your buddy from the real estate business.”  The president replied by saying he barely knew him.

Johnson finishes his letter by talking about the supposed whistleblower of whom he suggests was also after Trump, and damaged Ukraine/US relations.

In my role as chairman of the Senate’s primary oversight committee, I strongly believe in and support whistleblower protections.  But in that role, I am also aware that not all whistleblowers are created equal.  Not every whistleblower has purely altruistic motives.  Some have personal axes to grind against a superior or co-workers. Others might have a political ax to grind.

The Intelligence Community Inspector General acknowledges the whistleblower in this instance exhibits some measure of “an arguable political bias.” The whistleblower’s selection of attorney Mark Zaid lends credence to the ICIG’s assessment, given Zaid’s tweet that mentions coup, rebellion, and impeachment only 10 days after Trump’s inauguration.

If the whistleblower’s intention was to improve and solidify the relationship between the U.S. and Ukraine, he or she failed miserably.  Instead, the result has been to publicize and highlight the president’s deeply held reservations toward Ukraine that the whistleblower felt were so damaging to our relationship with Ukraine and to U.S. national security.  The dispute over policy was being resolved between the two branches of government before the whistleblower complaint was made public.  All the complaint has accomplished is to fuel the House’s impeachment desire (which I believe was the real motivation), and damage our democracy as described above.

Johnson’s full letter is embedded below.

Johnson to Jordan Nunes by Jeffrey Dunetz on Scribd