Lolita Express Party Girl: “I Never Had Sex With That Man, Bill Clinton”

Did She Or Didn’t She? MMMM 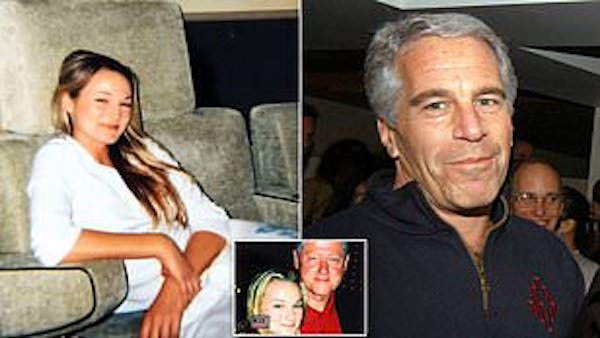 In 2015, Chauntae Davies, bit-actress turned masseuse, turned Lolita Express travel companion, told Inside Edition that she never had sex with either Epstein or Clinton. Clinton, through his spokesperson, made the following statement:

“President Clinton knows nothing about the terrible crimes Jeffrey Epstein plead guilty to in Florida some years ago or those with which he has previously been charged in New York.”

Yet, in an August 2019 interview with Good Morning America, Chauntae claims victim status, accusing Epstein of rape and unwanted advances. This interview followed Epstein’s suspicious death. It’s interesting to note that Epstein was picked up by the FBI just five days after Chauntae spoke to them.

Prince Andrew was drawn into this saga but has denied doing anything inappropriate or “noticing” that Epstein was often surrounded by underaged girls. Chauntae is challenging his statement.

(From The US Sun article, dated 1/9/2020) “Chauntae has demanded that Andrew speak truthfully to FBI agents as they move to nail Epstein’s associates.” She stated: “I hope he is honest. There is no way you could have been a friend of Jeffrey’s and not know what was going on.

“I don’t see how you could see somebody with another young girl all the time and there never being a conversation about it. It doesn’t add up.”

So, on one hand, she stated in her 2015 interview that she was clueless about what was going on with the underage girls, and in 2019 she points the finger at Andrew for being disingenuous…right!

In her 2019 interview on Good Morning America, Chauntae couldn’t explain why she never left the lavish embrace of sex predator Epstein. When asked to relate the first time Epstein was sexually inappropriate with her she admitted it was her first time to give him a massage. “He masturbated in front of me,” she said.

“Why did you go back?” she was asked. “I was told it wouldn’t happen again.” So she went back and, according to her memory of the

events, he raped her during the third or fourth massage. When asked why she didn’t tell the police, she seemed uncertain, finally landing on the excuse that he knew too many powerful people.

Okay, he did know some of the most powerful people on the planet, I can buy that, but why did she keep answering the phone and showing up at his residence and private jet? Supposedly, he raped her repeatedly over several years, bought her books and sent her to school. He paid for her sister’s college and spent lavishly on gifts for her and the other girls.

At what point does rape become consensual? She wasn’t locked up and she accepted his gifts and his invitations to accompany him and his friends on the Lolita Express, and to his private island, where she was raped several more times. She traveled with famous dignitaries and was practically giddy when describing the Africa trip when Bill Clinton traveled with her. For a failed B-rated actress with little education, she experienced the life of the rich and famous.

When interviewed about her role on the Lolita Express and what services she provided for Epstein and his guests, with a straight face she replied that all they did was give massages and teach yoga. She did have a photo of her making peanut butter and jelly sandwiches for everyone.

The shifting narrative presented by Chauntae leaves us with some serious doubts about her veracity. Before Epstein’s escapades were exposed, Chauntae saw and knew nothing. Then, when it all came out, a light bulb illuminated her memory. Is she afraid of being named as an accessory, for her failure to report the sexual exploitation of underage girls?

Epstein is dead, but those other “powerful people” are still alive. Chauntae continues to deny witnessing Clinton, Prince Andrew, or any other of Epstein’s guests doing anything with the other girls on the plane, but she did acknowledge there was a bed on the jet where things could have happened. You look at the photo of her with Slick Willy and decide for yourself.

Epstein Victim on Bill Clinton: “There Was Sexual Conduct And Foreplay… And A Bed On Epstein’s Jet”

While you are here, take a minute and click one or both of the links below and visit our sites for “fresh daily” news and opinion.

Epstein Victim on Bill Clinton: “There Was Sexual Conduct And Foreplay… And A Bed On Epstein’s Jet”

Maybe it is just safer to blame everything on the dead guy than take a chance of accidentally shooting herself in the head a few times!

For more photos and the complete article, go to The Sun.

While you are here, take a minute and click one or both of the links below and visit our sites for “fresh daily” news and opinion.

David Brockett is a Vietnam Veteran and former Marine aviator.  He writes fiction and historical fiction, as well as articles on politics, religion, gun-rights, preparedness, and current events.

For more articles from this author visit these sites: